How to Find the Lens Diameter of a Camera Lens

When buying filters or lens caps you need to know the diameter of your lens. But you don’t need to break out a ruler. You just need to know the code. And once you know what to look for, it’s easy. Includes lens filter size charts for major brands. 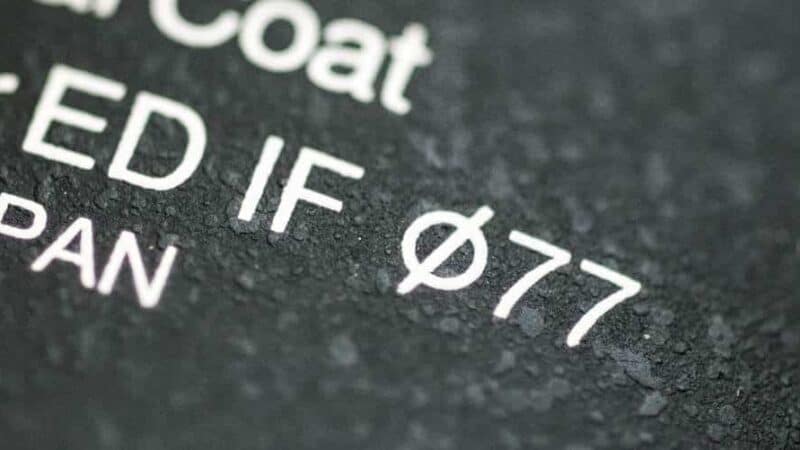 The lens diameter isn’t the same thing as saying a 50mm lens or a 70-200mm lens–that’s the focal length. If you have a DSLR lens with a focal length of 50mm, it doesn’t mean you’d use a 50mm filter–they’re referring to two different measurements.

Nor does it have anything to do with aperture settings like f/1.8 or f/5.6. That denotes the size of the opening to let light in.

Lens diameter is the physical measurement of the diameter of the front-most part of the lens. With DSLR lenses, it’s often threaded to allow filters and lens hoods to screw in. On mirrorless and Micro Four Thirds lenses, some have threads for filters, and some don’t.

There’s no set standard lens diameter size, but there are some common sizes for the diameter of DSLR lenses: 43mm, 49mm, 52mm, 44mm, 58mm, 62mm, 68mm, 72mm, and 77mm. And, in general, you need the right size for your lens–a 72mm filter won’t fit on a lens with a 77mm lens diameter (you can sometimes use an adapter, but that introduces other problems).

How to Find the Lens Diameter

But so long as you know what to look for, it’s usually easy to find out the lens diameter because it’s often printed right there on the lens. It might not be easy to spot because, on some lenses, it’s etched into the plastic or metal without any color added, so it’s not always easy to see. But there’s a good chance it’s there. It’s one of the few standards that camera manufacturers stick to. So whether it’s a Nikon lens, a Canon lens, a Sigma lens, or so on, the lens diameter is marked in the same way.

There’s a code, but it’s a simple one. And once you know what to look for, it’s easy.

What you’re looking for is something using the geometric symbol for diameter: ø. For once, it’s a logical symbol–a circle with a line across the diameter.

Here are some examples of what you’re looking for. In these cases, it’s clearly marked in white text. Some manufacturers aren’t quite so considerate, though; sometimes, you have to look for lightly etched numbers. Sometimes it’s on the outside of the lens, and sometimes it’s just inside the rim.

Occasionally a lens won’t have it marked, in which case your best bet is either trial and error or trying to track down a copy of the user manual or lens specs on the manufacturer’s website (or try the lens filter size charts below). There are also lenses that don’t have filter threads and don’t conform to the common diameter sizes. I find that these most often crop up on cameras with fixed lenses, and in those cases, there’s often a dedicated non-standard lens cap or filter attachment that’s sold as a spare part for that specific camera.

But here are some practical examples where the lens diameter is marked.

This one takes 72mm filters.

And this one takes 58mm filters.

If Your Lens Doesn’t Have the Lens Diameter Marked

Some lenses don’t have the lens diameter marked on them. In those cases, it’s time to break out a ruler with millimeters marked on it. Or, better yet, some calipers.

Because it’s a rather imprecise way of doing it, here are some common diameters used in DSLR lenses (all are in millimeters)–your best bet is to try to pick the most logical closest size.

Of those, the ones between 49mm and 77mm tend to be most common for DSLR lenses. Sizes smaller than that tend to be on smaller cameras. If you end up with a measurement for a size that you can’t find a filter for, chances are the measurement is a touch off. The major filter manufacturers don’t make a 50mm filter size, for example, so in that case, you’re probably actually after a 49mm filter.

If Your Lens Doesn’t Have a Filter Thread

Most DSLR lenses have filter threads, but not all of them. Some lenses, especially on the cheap end of the market, just aren’t designed for them. But even very expensive specialty lenses can lack a filter thread. Some of them, like extreme wide-angles or fisheyes, often have a very curved front element that doesn’t allow a flat filter. Others, like very long telephoto lenses, might have a very large front element that makes a filter impractical. In some cases, they’ll take filters on the other end of the lens at the mount point with what is known as a rear-mounted filter. They’re typically dedicated filters for that particular lens. And these same lenses often have their own lens cap or cover that goes over the end.

If your lens doesn’t have that option and you still want to use filters, a filter holder system like the Cokin filter system is worth looking into. Some of the holders still attach to a lens’s filter thread, but some can be mounted on the outside of a lens. They hold larger glass or polycarbonate filters in place. These filters are often rectangular or square. While they’re less convenient and more cumbersome to use, they’re especially popular for landscape photographers who have the luxury of very deliberate shooting, in part because you can stack multiple filters for different effects, you can get very high-quality filters with a huge range of different types and effects, and the design is especially well-suited to being able to precisely align graduated neutral-density filters (to darken a bright sky, for example).

There are a few things to bear in mind when buying screw-in filters for lenses.

I’ve compiled some lens filter size charts, starting with some of the most commonly used and current lenses. You can find the corresponding chart here:

Things Worth Knowing About Lens Diameter

Does the diameter of a lens matter?

The larger the opening, the more light that can enter, and the larger the lens elements that can be used internally. Those can potentially contribute to better optical quality, with potentially less light fall-off at the edges (vignetting) and potentially sharper images at wide apertures. You’ll notice in the tables at the links above that the more expensive “pro-level” lenses tend to have larger lens diameters than less-expensive consumer versions at the same focal lengths.

But there’s a reason I keep saying “potentially,” and that’s because you can’t tell the quality of a lens from its lens diameter. There are many other aspects that contribute to a lens’s quality, including its optical design, the type and quality of the glass, and the manufacturing precision.

Wide-angle and long telephoto lenses also tend to have larger lens diameters, the former to allow a wider perspective of the scene and the latter to allow in more light.

A further complication is that lenses are designed for particular types of camera sensors. Because full-frame sensors are obviously larger than cropped APS-C sensors, the lenses that are designed for full-frame cameras tend to have larger lens diameters than their equivalents designed to go on cropped-sensor bodies. Lenses for smaller sensors, like Micro Four Thirds, are typically smaller still.

So, in short, yes, the diameter of a lens does matter in the sense that it’s an important part of the optical design of a lens. But you can’t look at the lens diameter and determine the quality of a lens, and it’s not really a spec that is worth factoring into the decision on which to buy.

What size filter will fit my lens?

The first thing to determine is whether your lens has a filter thread on the front. While many lenses do, there are also more than a few that don’t.

If your lens has a filter thread, you’ll need to find out the lens diameter. In many cases, it’s marked some on the barrel of the lens itself with the ø followed by a number. That refers to millimeters. So ø58, for instance, would mean it will take 58mm screw-in filters.

If your lens doesn’t have a filter thread, it doesn’t necessarily mean there’s no way to use a filter. In some cases, a filter mount system might be a good option (there’s more about those above). In a few cases, the camera manufacturer might have released a dedicated filter to attach to the lens/camera combination (GoPro cameras are a good example of this because they use a non-standard lens port).

How do you remove a filter that’s stuck on a lens?

Sometimes filters can become stuck on a lens. It might be screwed on too tightly, or salt spray or grit might be jammed in the filter thread. And because the filters are so thin, there’s often not much opportunity to get a good grip with your bare hands. Especially if your hands are cold or wet (or both), which is common in landscape photography.

I don’t recommend using too much brute force. There’s the obvious risk of shattering or cracking the glass, but the ring itself is usually made of aluminum, so it’s quite soft. That means you can warp the shape or damage the threads (or both).

Nor do I recommend using any kind of oil or lubricant to try to loosen it. So no WD-40 or silicone spray or clock oil. The last thing you need on the outside of your lens is an oil or grease smear. And you definitely don’t want any of that finding its way inside the lens.

Two quick options are to use a clean cloth to try to get a better grip. I find that a rubber band wrapped around the filter works even better. Rubber kitchen gloves can also give a good grip.

If you find yourself putting filters on and off a lot, you can also get inexpensive filter wrenches that offer an elegant solution that has the benefit of reducing the risk of getting fingerprints on the filter or lens’s front element. They’re especially useful when your hands are cold or wet.

How to Find the Lens Diameter of a Camera Lens