The Nikon AF-S 8-15mm fisheye zoom lens is optically excellent and opens up some fun creative opportunities. There are also some quirks when shooting with it. 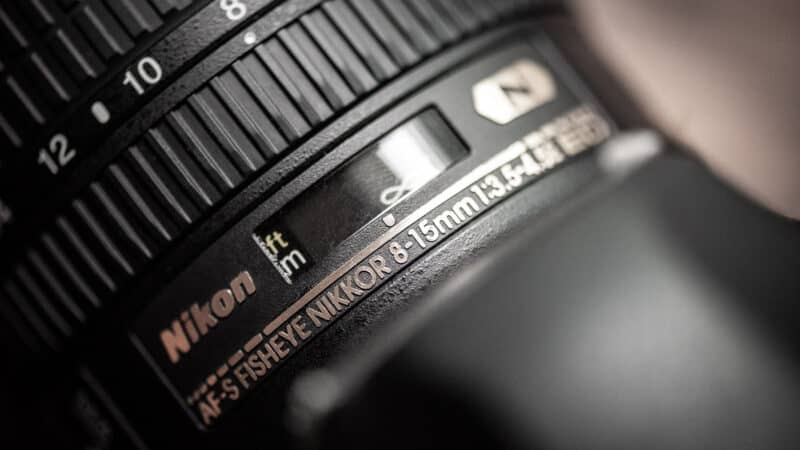 The best word for this lens is playful. It’s a fun one for breaking the normal rules of perspective and depth. You’ll be hard-pressed to get a “normal” photo out of it. And it’s pretty easy to overdo the fisheye look, although thanks to GoPros and their competitors, we’ve become much more used to it.

But if you’re looking to spread your wings creatively, the unusual optics of this lens will give you a massive helping hand. With this lens, it’s almost impossible to take something like the photos you usually take.

Fisheye lenses are more commonly prime, fixed-focal-length lenses. It’s somewhat unusual to find a zoom version. But this lens is both a zoom fisheye and has autofocus. It’s designed for Nikon DSLRs with an F-mount. To use on a Z-mount mirrorless system, you’ll need to use an FTZ Mount adapter, although I haven’t personally tried that combination with this lens and haven’t confirmed that it works well.

Zoomed out at 8mm, on an FX body it only uses part of the frame—a globe in the middle of the frame. But it’s not the kind of globe you get with a tiny planet photo. Instead, it’s much like the view you get from a peephole on a house’s front door, with a round image in the center surrounded by a prominent black frame. It captures a full 180-degree field of vision.

Zoomed in fully to 15mm, it fills the full frame, corner to corner, with the image. And it’s only a slightly smaller field of vision: 175° (on a full-frame FX sensor). There’s heavy fisheye distortion—there’s nothing aspherical about this lens to keep lines straight. So vertical lines get all sorts of bent. But it’s something you can have fun with.

The thing that has surprised me most about this lens is how sharp it is. Nikon’s engineers have clearly put some effort into this lens—it’s not just some novelty item. It’s surprisingly sharp corner to corner. And there’s very little in the way of chromatic aberration (purple fringing). Having used plenty of ultra-wide lenses before, I expect this one to be far softer around the edges and be prone to the usual chromatic aberration issues. But after shooting with it for a while, I have no complaints at all about this lens’s sharpness and optical performance.

That said, there are some quirks to shooting with it. I’ll go into more detail about those below.

This lens packs a lot of drama into the frame, but it’s also not going to be a good fit for every style of shooting. Maybe you could get a shot or two out of it for a wedding shoot, but it’s no good for standard portraits or conventional architectural shots.

But if you’re looking for something out of the ordinary, there are opportunities. As you can tell from the shots below, as well as from the larger collection of sample images I’ve posted separately, I’m a fan of what fisheye lenses can do with grand interiors. But there’s a lot more you can do with a fisheye lens, and I hope to be able to get back to them as travel opportunities start opening up more.

Overall, it’s a lot of fun to shoot with this lens, but it does come with some downsides, especially as a walking-around lens (these are much less of an issue when shooting in a studio environment).

The lens isn’t large by DSLR standards—and it’s considerably smaller and lighter than something like the Nikon 12-24mm wide-angle zoom. But it’s also significantly bigger and heavier than the Nikon 16mm fisheye, which is my usual go-to fisheye lens on Nikon FX bodies (the 10.5mm is a more logical choice on DX bodies).

My least favorite things about this lens are the parts that attach to the front. In other words: the lens hood and lens cap.

For one thing, the lens cap is both flimsy and clumsy to attach and detach, especially if you’re walking around, as you tend to do in travel photography. And you’ll want to be using the lens hood as much as possible when not actually shooting for two reasons: to protect the front glass element (the bulbous curve on the front element means there’s no way to attach a screw-in protection filter) and to reduce dust getting on the front element—it tends to show up dramatically with the combination of ultra-wide perspective and close focus and a high risk of light sources shining directly on the lens.

As for the lens hood, it provides minimal shielding from stray light and a little protection for the front element, but you can’t leave it on if you want to use the lens at any zoom point other than zoomed in at 15mm. If you leave the lens hood on when zooming out, you get a result like this:

So you’ll want to remove the lens hood to get that circle-shaped fisheye view.

I have some more detail on these aspects below.

I took all of these with a Nikon D850. You can click on each image for a full-size version for a closer look.

When you zoom out to use the circular fisheye, you have a small amount of control over the crispness of the circular image border by adjusting the aperture.

Here’s an example shot at f/22. The edge is much more clearly defined, although it’s still not a perfectly crisp edge.

And it’s also influenced by the scene at the edges of the frame. Here’s an example where the highlights around the edge bleed into the border. It’s exacerbated by punching up the contrast.

With a lens this wide, using a lens hood becomes a bit of a tricky proposition. To keep out of the way of the exceptionally wide field of view, they necessarily have to be narrow. And that means that their effectiveness of blocking stray light is pretty minimal. Probably their most useful function is offering some extra protection to the front, bulbous glass element that protrudes out from the lens barrel.

This lens comes with its own dedicated lens hood. It’s plastic, has a special locking mechanism just for this lens, and is more flimsy than your average plastic lens hood. I’ve also found it surprisingly hard to attach without looking at it.

Unlike some other lens hoods that you can just leave on or off and not think much more about it, there are some things worth knowing when using this one.

For one, the lens cap—again, a dedicated one for this lens—only works when the lens hood is attached.

For another, you can’t use the lens hood if you want to use the wide zoom focal lengths under 15mm. That’s because the lens hood comes into the frame rather prominently. I have a practical example of that higher up on this page.

The lens cap is, again, a dedicated model for this lens. It attaches with a combination of slipping over the front and snapping into place.

Worth noting is that the lens cap will only attach if the lens hood is attached. It actually attaches to the hood rather than the body of the lens itself.

This lens isn’t compatible with most traditional filters on the market. Because of the curved front element, there’s no way to attach glass filters to the front of the lens.

With some lenses with that issue, they have a slot on the back of the lens barrel for rear-mounting lenses. That’s not the case with the 8-15mm—there’s no rear-mount lens slot.

It might be possible to attach a mount for 150mm plate filters, but I haven’t tried that, and I’m not aware of an off-the-shelf mount for this lens.

Underwater and action photography when put inside something like a Aquatech surf housing. There are some specialized accessories for housings, such as this Seas & Sea zoom gear.

I’ve had some fun with it with grand interiors.

With a very short minimum focusing distance of 6 inches, combined with the very deep depth of field of fisheye lenses, you can combine very close objects with large objects further away to mess with perspective and distance.

In a creative studio setting that uses sets, there are lots of possibilities that play with the distorted perspective.

And while it’s not good in any way for traditional portraits because of the very heavy distortion, there are some fun opportunities that embrace that distortion.

I’m a fan of Nikon’s 16mm prime fisheye. And while it doesn’t have the zoom and isn’t as optically impressive, it does have something important going for it: it’s very small. That means it can slip into a camera bag without displacing something else. The 8-15mm is a much larger and heavier beast and takes up a full lens space in the camera bag.

After shooting with this lens for a while, the short version is that I’ve been very impressed with the 8-15mm’s optical performance—especially at how sharp it is across the full frame. And while the circular fisheye is fun to play with, it’s not something I can put to much use in my everyday shooting. So, despite the impressive optics of this lens, for me, the 16mm prime fisheye is the one I’ll be leaving in my travel kit and pulling out when I need a fisheye—mainly because it’s smaller, lighter, cheaper, a smidgen faster, and still offers very good performance with frame-filling fisheye perspective.

You can find more tech specs on Nikon’s site.

Overall, I’ve found the Nikon 8-15mm fisheye to be an impressive lens. Factoring in its extremely wide perspective, I have to say it’s optically excellent. The focus and zoom are both smooth and quick.

It’s also not an inexpensive lens, with an MSRP of $1249.95. By contrast, the 16mm fisheye prime has an MSRP of $999.95. So to really justify the 8-15, I’d think you really need to have a way to use the zoom. In my case, I don’t have a good use for circular fisheye images. They’re fun to experiment and play with, but they’re really not images I can sell to clients or editors. I simply don’t have a market to feed circular fisheye images, whereas I have much more use for frame-filling fisheye shots.

So I won’t be getting rid of my 16mm fisheye just yet, but I can certainly see how the 8-15mm zoom fisheye would be a more attractive option for some photographers.

Since it’s quite a new lens and one that appeals to a niche market, I haven’t come across many on the used market so far. But it’s always worth a look to see if KEH has any in stock.

You can also rent them at BorrowLenses and LensProtoGo.

Images and product information from Amazon PA-API were last updated on 2022-12-04 at 22:50. Product prices and availability are accurate as of the date/time indicated and are subject to change. Any price and availability information displayed on Amazon Site at the time of purchase will apply to the purchase of this product.