The Oben CTM-2500 is a solid yet light carbon fiber monopod. It stands up to 64 inches tall but collapses small enough to fit in carry-on. It can hold up to 26 pounds but itself weighs just a touch over one pound. 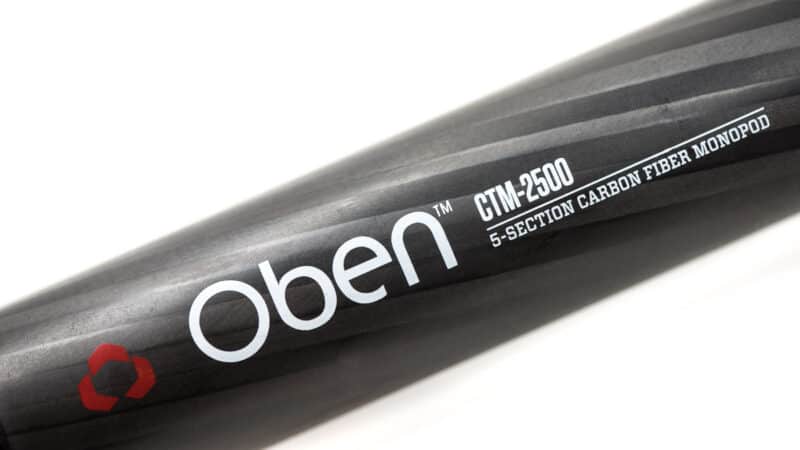 I don’t find myself using monopods as often tripods when I’m traveling, but if you’re using a long telephoto for wildlife or sports photography, they’re a must. Not only do they offer crucial stability when shooting, but they take the weight of what can be very heavy lenses. So I like to have one on hand when I’m packing a long telephoto lens.

In recent years I’ve been using a Sirui P-326 carbon fiber monopod and have been very happy with how it performs, especially for an affordable option from a brand that isn’t as well known as some of the big players. There are more refined and stronger tripods available, but they also tend to be much more expensive, and I have a hard time justifying spending $300 or more on a monopod for travel when I’m not shooting professional sports or birding day in day out. B&H Photo sent me a CTM-2500 to check out. 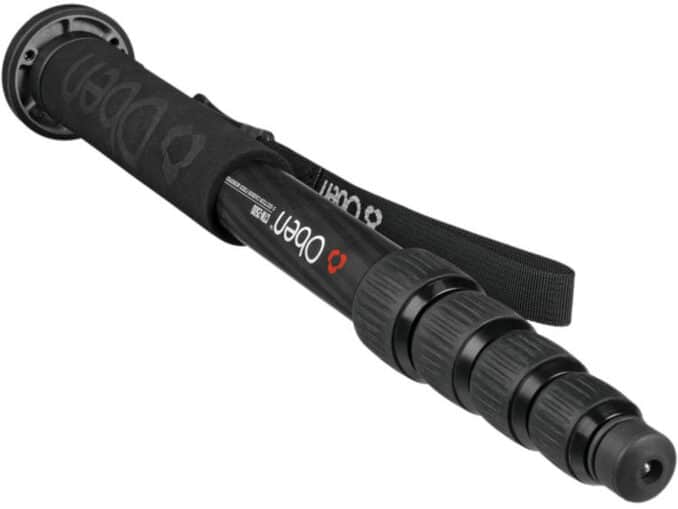 The legs extend in five sections. The twist locks are rubberized and have good grip. They’re easy to use with one hand, even in cold or damp conditions.

I’ve found that the locks are strong and solid and there’s no wiggle room. So even fully extended it feels tight and solid with no hint of flimsiness.

It’s sold in two configurations. One is just the monopod without a head. You can, of course, simply attached the camera or lens directly to the monopod and shoot like that, but adding a tilt head or ballhead will increase the flexibility. If you don’t want to add your own, it’s also sold bundled with the Oben VH-R2 tilt head, which is a good combination so long as you’re happy using the quick release plate that uses (see my detailed review of the VH-R2). Bear in mind that adding a head might lower the maximum load capacity. The maximum load capacity becomes whichever is lower, the head or the main stick.

Another option is to add a quick release clamp directly to the top of the tripod. It doesn’t give you the angle versatility of a full head, but it does provide a way to put the camera on and off quickly. The one I use is a Desmond DAC-X1 skeleton clamp which is compatible with Arca-style quick release plates.

It includes a padded grip around the top section. Oben’s marketing materials call this a “leg warmer,” which I confess is not something I’ve seen it called before (they’re usually called leg wraps or leg protectors) and touts it as a feature in extreme weather, but it’s mostly just a useful and comfortable grip. While it’s pretty dense foam, much like you see on many tripods, it’s naturally going to get a bit banged up over time if you treat it roughly.

There’s a retractable steel spike in the foot. Just rotate the rubber foot surrounding it make the spike go in or out. The spike doesn’t come out and you can’t remove the foot to screw in a different kind.

Most of the time a wrist strap is just a wrist strap. And that’s generally true in this case too, but there are a couple of minor things about this one that I like as nice touches. For one, there’s an integrated belt clip that’s useful for attaching to your belt or a strap of your camera bag. For another, it’s a good length–a but longer than usual–so it doesn’t get in the way when you’re using the strap as a security precaution while shooting (I mean security against dropping, not security against pilfering, although it works well enough for that too). The wrist strap is also removable by unscrewing the mounting plate and sliding the wrist strap’s collar off.

At the top, there’s a broad attachment plate that uses the de facto universal slugs. There’s a 3/8-16 slug by default, but if you want to use the smaller 1/4-20 size instead, you can remove the plate and turn the bolt around.

Monopod tip: If you’re not using your monopod fully extended, it’s often a good idea to extend the top sections first until you get to your preferred shooting height. That’s because those top sections are significantly thicker and stiffer than the ones at the bottom.

An exception is if you’re shooting in dirt or mud–you want to keep the twist locks away from grit and grime as much as possible.

Oben’s CTM-2500 carbon fiber monopod is quite similar to the Sirui in many ways. They support similar loads, are both carbon fiber, use twist locks for the extensions, and both have built-in retractable steel spikes. The Oben is a 5-section monopod compared with the 6 sections of the Sirui.

Taller shooters might appreciate the extra height of the Oben–it’s about 4 inches taller fully extended.

If luggage or camera bag space is at a premium, the Sirui has slight edges in both compactness (about 2.5 inches shorter when collapsed) and weight (about 10 percent lighter). Those aren’t big differences, but they can make a difference if you’re trying to travel as light as possible, especially with carry-on or in a walking-around camera bag.

The Oben feels a bit stiffer and stronger in my hands. It doesn’t appear to have as much vibration when fully extended.

Overall, though, there’s not much between them, and to my mind, they’re both very good affordable options. I consider the extra compactness of the Sirui a plus but also like the extra strength and length of the Oben. For an upcoming trip to the Arctic where I’ll be using long telephoto lenses, I’ve chosen to pack the Oben because it’s that little bit stronger and stiffer. But the reality is that I’m more than happy using either of them.

The Oben CTM-2500 is a solid yet light monopod. Collapsing down to just under 18 inches, it can fit comfortably in carry-on. But it extends to a generous shooting height of up to 64 inches and has a generous maximum load capacity of 26 pounds, all while weighing in at just a touch over one pound.

You can find the base monopod at B&H Photo for $95. It’s also sold bundled with Oben’s VH-R2 tilt head, which makes for a good pairing so long as you’re happy using that head’s quick release plate.

The CTM-2500 is Oben’s top and strongest offering, but they also offer alternatives, including a 4-section carbon fiber monopod that is slightly shorter when extended and slightly longer when collapsed.