Tripods aren’t always ideal for travel photography. There are too many places you can’t use them. But a good monopod can come in very handy.

When it comes to keeping your camera still in low light conditions or with a big telephoto lens, it’s hard to beat a good tripod.

But tripods aren’t a perfect fit for every occasion. They’re often big and bulky. They’re relatively slow to move around. And, as anyone who has ever tried taking one with them when they travel, there are a lot of places you can’t use them. And in those places, sometimes security won’t even let you even take it into the building, so you have to work out some way to store it.

A good monopod can come in very handy. It’s more limited than a tripod, but it’s also more flexible. And it doesn’t replace a tripod–it complements it and lets you get sharp photos you otherwise wouldn’t get. With the right technique, you can easily squeeze out a few extra stops compared with handholding, especially with a telephoto lens. 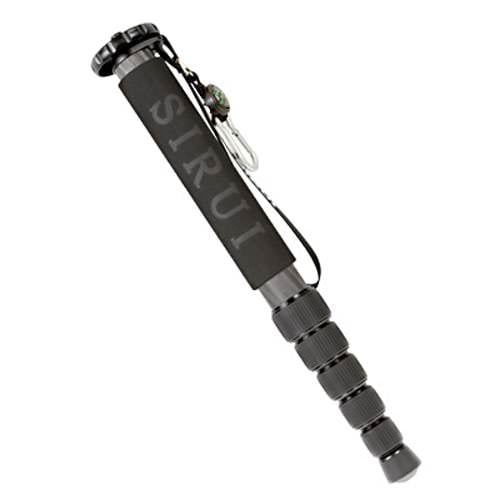 For travel, a monopod that’s small and light enough to keep in your camera bag just in case is ideal. There are a lot of places you can use a monopod that you can’t use a tripod.

In my experience, a lot of places that have explicit rules against using tripods don’t stop you from taking a monopod. Security guards tend to follow rules they’re given, and so long as something isn’t on their list of things that aren’t allowed, they don’t worry too much. I’ve rarely had a problem taking a monopod into places where tripods are banned. Sometimes security guards inside might object to actually using it, but the odds are much better than trying to use a tripod.

You can get hybrid versions of a tripod and a monopod that have splayed feet. There are also tripods that disassemble to give you a monopod. But with monopods, there’s often a lot to be said for keeping it simple.

The gold standard of compact travel monopods is the Gitzo GM5661T Series 5 Traveler Monopod. It’s tiny and has a very impressive weight limit of 55 pounds. But there’s a catch: it costs around $400. That’s a lot of dough to pay for something that’s a little too easy to leave on a train or under a seat in a restaurant. So while I’m a big fan of the Gitzo Traveler series of tripods, I frankly balk at spending $400 on a monopod.

So I went looking for a more cost-effective option. I needed it to be small and light. The bigger and heavier it is, the less likely I am to take it with me. And I needed it to support a reasonably heavy lens and camera combinations in the outdoors with a long telephoto lens as well as dark interiors. 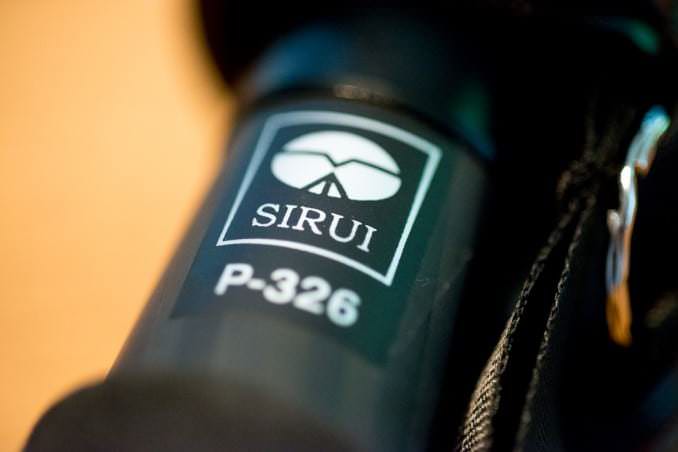 The Sirui P-326 Carbon Fiber Monopod is in 6 sections and collapses down to a tiny 15″ and weighs less and a pound (0.9 lbs, to be precise). It’s compact and light enough to just through in your bag and won’t eat into too much of your carry-on allowance.

Sirui wasn’t a brand I was familiar with. Based in Hong Kong, they’re relatively new and have focused thus far mostly on the Chinese market. They specialize in photographic equipment and design and manufacture their products themselves. Based on this monopod, I’m impressed and would definitely give their other products a look. 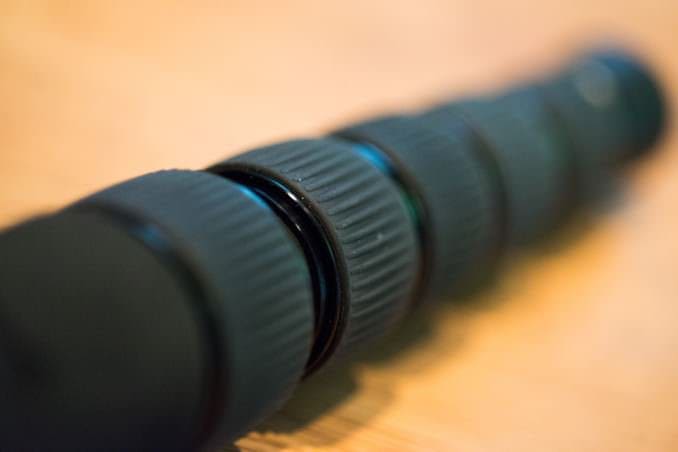 I’ve found that the twist-locks lock tight. As with nearly all types of extension locks, they don’t place nicely with sand and dirt, but I haven’t found them to be more of a problem than usual.

It supports a maximum load of 22 pounds. That’s quite a lot, and it’s good for a good range of camera and lens combinations. As examples, a Nikon D4S with a Nikon 70-200mm f/2.8 lens combination weighs in under 7 pounds. Even with a massive 600mm lens for wildlife or sport, the combination is going to come in under 15 pounds. So a 22-pound load limit is going to be plenty for most uses.

If you have some really seriously heavy glass, you’re better off with the stronger and more expensive Gitzo GM5561T Traveler 6x Carbon Fiber Monopod, which supports up to 55 lbs.

The maximum extended height is 60.6 inches. I’m about 6′ and find that just under fully extended makes for a comfortable shooting height on flat ground without a monopod head attached.

But it’s where it’s fully retracted that the P-326 really comes into its own. It retracts down to a tiny 15 inches. And the whole thing only weighs 0.9 pounds. So it’s easy to throw in the back and carry it around all day.

This is mostly a standard monopod. It extends. It collapses. It supports a camera. But there are a few little nice touches.

It comes standard with a hand strap and a carabiner clip to attach to the outside of your camera bag or backpack. There’s even a small compass, which is a bit of a gimmick, but why not? The carabiner clip works fine, although I’ve replaced the standard one with something a bit sturdier. All three sections are easily removed because the strap attaches to a collar that locks in under the attachment plate. If you don’t want them, just take them off. 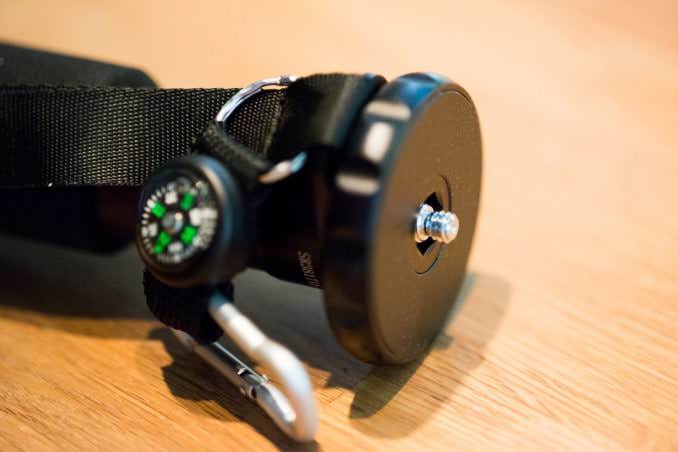 The attachment plate that comes with it is solid and wide, making for a good grip for the attachment to the camera or lens. And, of course, you can always add a quick-release head as well. I use Arca-style quick release plates, so I fitted a Desmond skeleton clamp to mine. The That’s small and light. The downside is that to shoot in portrait (vertical) mode, you either need an L-plate on the camera or a rotating lens collar. So for maximum flexibility (also a little extra weight and length) you can also add a ball-head like this one. 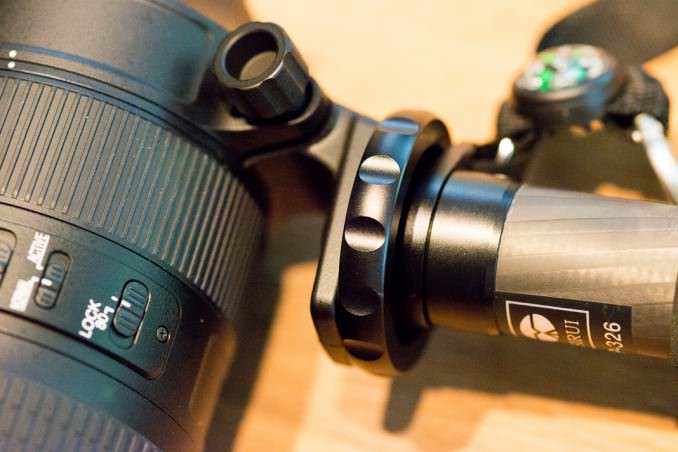 The foot of the monopod is fitted with a retractable steel spike. In its normal mode, the foot is rubberized, which is good for a broad range of surfaces. 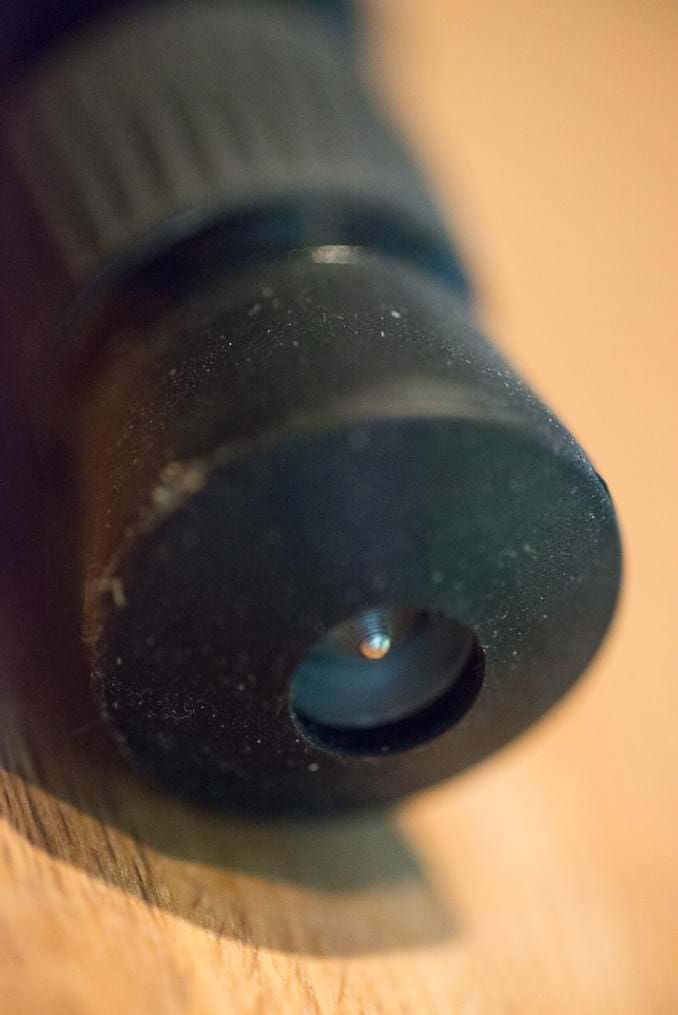 The steel spike is useful for ice, grass, or anywhere that a pointier tip will help keep the foot from moving around. It’s extended by just twisting the foot. And because of the way it’s designed, there’s nothing to clip off or remove, meaning there’s one less thing to lose. 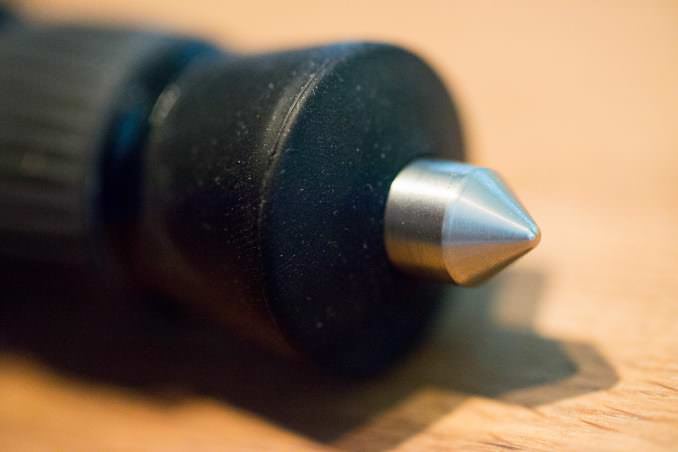 The mounting screw is also reversible from a 1/4 “-20 & 3/8 “-16 screw. The former is the standard size on the bottom of cameras and lens collars. The latter is the standard for heavier-duty attachments like the base of tripod heads. Having it come with both is nice to have. And, again, because of the way it’s designed to flip over, there’s nothing to detach and lose (or leave at home when you need it on the road).

And it comes with a 6-year warranty.

Would I Recommend It?

Yes. It meets all of my requirements. It’s strong. It’s sturdy. It’s light. And it’s small. And with a street price under $100, the price is very good. I didn’t know the brand before, but I’ve been pleasantly surprised.

There’s also an aluminum version, the Sirui P-306. It’s less expensive, has a lower load rating of under 18 pounds, and is about 20 percent heavier at 1.1 pounds.

Look for Them At

Images and product information from Amazon PA-API were last updated on 2022-07-01 at 00:00. Product prices and availability are accurate as of the date/time indicated and are subject to change. Any price and availability information displayed on Amazon Site at the time of purchase will apply to the purchase of this product.