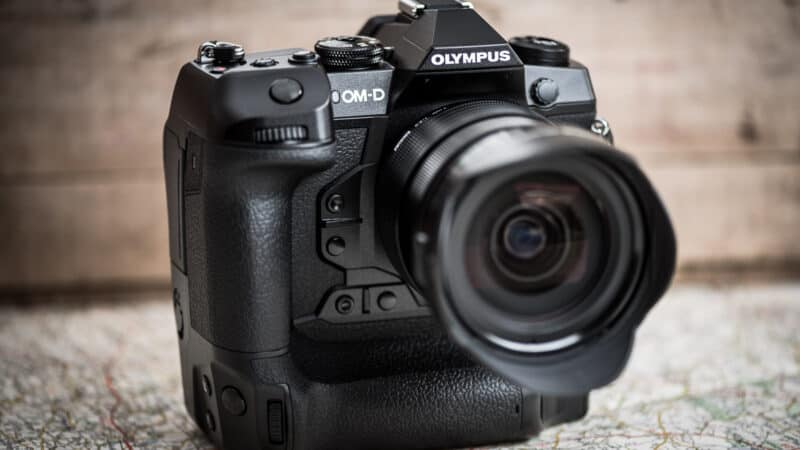 I’ve recently had the chance to shoot with the new Olympus OM-D E-M1X mirrorless camera. It’s a high-end mirrorless camera with a 20.4MP Micro Four Thirds sensor designed for very-fast capture and pro use. It’s especially well-suited to professional sports photography and, to a somewhat lesser extent, wildlife photography.

For a mirrorless camera, it’s big. That’s mostly because it has an integrated vertical grip that also serves as an oversized battery compartment that holds two batteries. It’s also quite heavy–the body, with the two batteries and memory cards installed, weighs in around 2.2 pounds (nearly a kilogram). The image quality is very good, and the cropped sensor amplifies the reach of zoom and telephoto lenses, something that can be especially useful for sports and wildlife photography. But the thing I’ve been most impressed with is the speed of its handling, with super-fast and accurate autofocus and responsive shooting.

After shooting with the E-M1X for a while, here’s what I think are some of the main pros and cons.

The E-M1X’s overall design is utilitarian in a very workhorse kind of way. It’s not a particularly pretty camera, and it’s quite boxy. The built-in vertical grip brings advantages–in addition to a more comfortable shooting hold when framing vertically, it provides space for an extra battery. But it also adds a lot of extra bulk. It makes the camera quite large, especially for a mirrorless camera. Overall, it’s smaller than a full-size pro DSLR with a grip attached, but not by much.

The body is made of magnesium alloy is weather sealed. I haven’t taken it out shooting in the rain or dunked it in the ocean so haven’t tested that aspect, but it feels solid in the hand–as you’d expect from a professional-grade camera body.

It sits quite well in the hand, in a boxy kind of way. The controls are generally logically laid out (although I’ve taken a while to get used to the power switch being on the left side) and responsive. One thing I like is that there’s plenty of spacing between the buttons, meaning there’s less chance of accidentally bumping the wrong one. Once you get used to where they all are, it makes it easy to use them quickly and in fast-paced or dark conditions.

The screen is a swiveling touchscreen. It’s bright and crisp for both the image view and the settings information. One feature I particularly like is that you can touch a point on the screen and it doesn’t just focus there–and it does that very quickly–but will also work as a shutter to take a shot.

The menu system could do with some work. The settings are there, but it’s somewhat jumbled, and many of the settings use acronyms and shorthand that don’t make them self-evident what they are. I found myself having to keep the instruction manual handy.

One of the headline features of this camera is its autofocus speed. And it really is quick. I’ve found the tracking feature to be excellent and accurate–I wish the tracking on all cameras was this good.

You have the usual shooting modes: aperture priority, shutter priority, program mode, and manual. You also have four custom slots that you can use to assign your own combinations of settings as a kind of speed dial for particular types of shooting. The shooting modes work basically how you’d expect them to, and you have the usual array of related settings such as auto ISO.

On many cameras, the shutter is unremarkable. A shutter is a shutter is a shutter. But with this camera, I feel as though it’s worth singling out. It has one of the most responsive shutters of any camera I’ve used. It’s quick and light, and the hair-trigger is especially good for fast-moving action, especially when combined with the super-fast autofocusing. And it’s backed up by a shutter mechanism that is both subtle and satisfying. It’s a combination I really like. The mechanical shutter has a fastest speed of 1/8000 second, which is pretty standard for top-shelf cameras these days, but you can also capture at up to 1/32000 second with the electronic shutter.

Unlike some other cameras these days that feature eye-poppingly high ISOs into six figures, the E-M1X has a fairly modest range from 64 to 25600. Of that, the native ISO range–that is, the true ISO that the hardware sensor is designed to handle–is 200 to 25600. The two lowest settings–64 and 100 (or close-to equivalents)–are actually in a Low extended range where software is taking over. I’ve posted some practical examples of the performance throughout the ISO range separately.

It’s especially well suited to capturing fast action. It has very high-speed burst modes, with up to 15 frames per second with the mechanical shutter and up to 60 frames per second with the electronic shutter. And we’re not talking about short bursts here. With the mechanical shutter option, it can take up to 103 consecutive RAW files, and up to 49 or 74 consecutive frames with the electronic shutter, depending on which autofocus mode you’re using. And if you’re shooting at a still-fast 10 frames per second, you can buffer up to 287 exposures in RAW format with continuous shooting, which is pretty impressive.

It also has built-in 5-axis sensor-shift image stabilization. Olympus claims it compensates for up to 7.5 stops of camera shake. I can’t independently verify that precise number, but I have found that the stabilization works well in low-light situations. It doesn’t help with the subject moving, of course, but it does help a lot with camera shake and lets you get away with slower shutter speeds for still subjects.

It has some pretty neat party tricks that make use of the sensor stabilization. They include a tripod high-res mode and a hand-held high-res mode that are basically multi-image stitched panoramas to create larger images outputting up to an 80MP RAW file (with the tripod mode) or 50MP JPG. There’s also in-camera focus stacking. There’s also a Pro Capture Mode that would be especially good for action shots such as sports of wildlife. With the shutter half-pressed, it starts recording and buffering full-resolution images. If something then happens, you can then fully depress the shutter and the previous 35 frames will be saved to the memory card. So it’s kind of like a retrospective capture.

Video recording to the memory cards is encoded with standard H.264 compression–there’s no H.265 HEVC. When recording to an external device, you can record at 4:2:2 8-bit recording.

There are also time-lapse video modes, although they’re a bit limited in their interval and output options. And there’s slow-motion available at 1080p by shooting at 120fps.

I’ve found that shooting video with the E-M1X works well, but it’s more of a stills camera with video capabilities, and if you’re shooting primarily video you’ll probably be looking at other more specialized options like the Panasonic GH-5.

It uses USB-C to charge and for data transfer from the camera. That’s not exactly cutting edge now, but surprisingly few cameras have caught up to this newer standard yet. So it’s nice that it’s there.

There’s also wifi and Bluetooth connectivity. I haven’t tried those and can’t speak to them, but those types of features are pretty much standard these days.

Here are some sample images I shot with the E-M1X. You can click on each image to open a full-resolution version. These were all taken with an Olympus M.Zuiko 12-40mm ƒ/2.8 Pro lens. I’ve posted a larger collection of sample images here.

You can find a PDF version of the instruction manual here.

Memory cards. It takes two SD cards and is compatible with SDHC and SDXC. If you’re shooting with the high-speed buffer modes or the high-bitrate video modes, you’ll be wanting a very fast SD card.

This is a camera designed for work rather than play. While the marketing materials use words like “compact” and “lightweight”, those are only relative to the kind of full-size pro DSLR that it’s taking on rather than compared to other mirrorless cameras. It’s solid and rugged. When you put it in your hand to shoot, it feels like a tool for a working pro.

The image quality is good without being remarkable in comparison with other market-leading cameras today. In shooting with it, the features I’ve been most impressed with have to do with its speed and responsiveness: the excellent autofocus features, including very good tracking, and the speed and responsiveness of stills shooting from individual shots to superfast burst modes.

Check the current price and availability of the E-M1X at: