Here’s my hands-on review of the Sony Alpha a6400, Sony’s newest addition to its compact mirrorless interchangeable lens range. 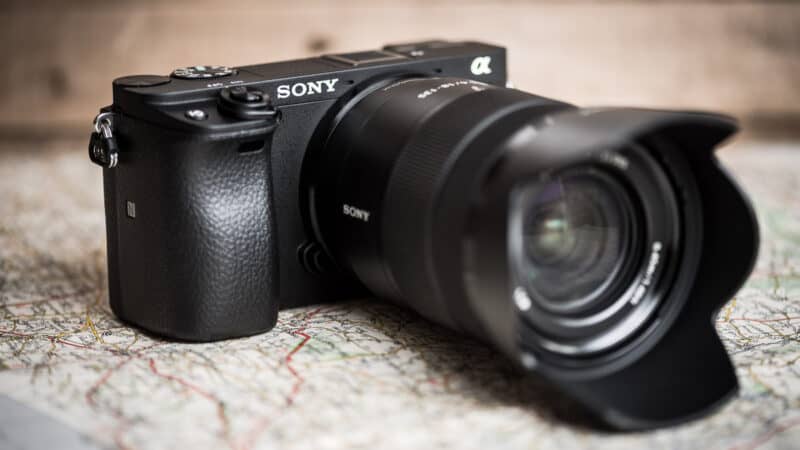 I’ve lately been out shooting with the new Sony a6400 mirrorless camera, the latest in the smaller APS-C cropped mirrorless cameras in the Sony Alpha range (they also have full-frame cameras in the Alpha range, such as the a7r III and a7 iii). It has a 24.2 MP APS-C Exmor CMOS sensor and Sony’s BIONZ X onboard image processor; these work together to give better-quality images.

I’ve spent quite a bit of time shooting with various cameras in the Alpha range in the past few years, including both their smaller APS-C sensor cameras and full-frame ones like the a7r IV and a7 III.

If you’ve used any of those cameras, the a6400 will feel instantly familiar. It looks and feels much like the other APS-C sensor cameras in the Alpha range and has essentially the same controls, layout, and menu system.

If you’ve held any of the other cameras in Sony’s range of APS-C Alpha cameras in recent years, the a6400 will feel instantly familiar. It has the same form factor and the same kinds of controls, buttons, and knobs. The main body is a rectangular box, with a raised handgrip that also serves as the battery compartment. It’s not the comfiest camera you’ve ever held, but with such a light and small camera, you don’t need ergonomic overkill.

On top of the body are a flash hot shoe, a selector dial for choosing the shooting mode, a scrolling dial for moving through menus or between images, and the shutter button/power switch.

A large screen dominates the space on the back of the camera. It’s a touchscreen. The touch control works for shooting photos–for selecting a focus area, for instance–but isn’t used for navigating the menu system. And the screen tilts vertically, making it easier to see what you’re doing if you’re shooting from high or low vantage points. It doesn’t rotate side to side.

At the top right is an electronic viewfinder. For an EVF, it’s sharp, bright, and responsive. Like most other EVF’s, it shows the same kinds of information as the back screen–in other words, a live view of the scene as well as any information overlays or menus you have set to display. Also on top is a tiny pop-up built-in flash. It only gives a tiny amount of illumination and isn’t something I’d generally use for many actual lighting purposes, although I might use it in some circumstances as an optical trigger for off-camera flashes or as a small catch light.

To the right of the screen is a cluster of dials and buttons that are used as shortcuts, for menu navigation, and for changing settings. You’re able to customize the function assignment of some of these settings from the defaults.

Tucked away on the top right, partially around the corner, is the video recording stop/start button, which you operate with your right thumb.

The overall design, while quite angular, fits quite comfortably in hand, although if you have particularly large hands you’re likely to find it a little cramped to use. The build feels solid without veering into the highly ruggedized bodies of some other cameras.

The menu system is the same kind used in most other Sony cameras these days. It’s clear and quite logically laid out. While the perfect way to cram so many settings and options into a single menu is yet to be invented, Sony’s current iteration is one of the better solutions, and they’ve clearly decided not to reinvent the wheel just for the sake of it. The upshot is that if you’ve used another Alpha camera, you’ll be right at home with this one.

Shooting Photos with the Sony a6400

The a6400 has a 24.2 MP APS-C sensor. The APS-C part stands for Advanced Photo System type-C, and it refers to a sensor that’s a little smaller than what is referred to as a full-frame sensor (which, in turn, is roughly the dimensions of 35mm film). So it’s smaller than the sensor in the flagship models like the a7iii and a7riii, but it’s significantly larger than the sensor in most compact cameras. And that larger sensor gives a number of advantages in terms of image quality, especially in low-light conditions.

At full resolution, the photos come out at a maximum of 6000 pixels by 4000 pixels. It shoots either JPG or RAW (or both at once).

Sony sensors are among the best in the business, and if you compare the results from this to a camera in the same price point even five years ago, it’s quite remarkable how good sensors have filtered down to even the moderately priced cameras. While it’s not up there with flagship models like the Sony a7r III, it’s also a smaller APS-C-sized sensor than those full-frame models, which puts it at a disadvantage in a direct side-by-side comparison (the a7r III and a7 III both use a larger full-frame sensor). That said, for an APS-C sensor, the image quality is very good.

The a6400 is a very easy camera to shoot with. I found that everything from autofocus to exposure works well and as you’d expect. I haven’t come across any surprises or specific shortcomings. The shutter response is quick and true. The autofocus isn’t perfect, but for a camera in this class, it ranks among the better ones.

Overall, the photo image quality is excellent, especially at ISOs under around 20000. While you can push the ISOs up into the extended range up to 102400, the image quality starts dropping off quite markedly, and those top ISOs aren’t ones I’d use in everyday shooting. I’ve put together a separate post on the a6400’s ISO range with plenty of examples here.

Here’s a small sampling of photos I’ve taken with the a6400. I’ve posted some more extensive collections separately, including general sample photos, examples across the full ISO range, and some photos taken at high ISOs.

Shooting Video with the Sony a6400

The a6400 has capable video options, although it’s not really a video-first camera in the way that something like the Panasonic GH5 is. Its top shooting mode is 4K30, which uses the XAVC S codec and records with a bitrate of around 100 Mb/s. You can also shoot in some resolutions/framerate combinations with the older, more compatible AVCHD codec at lower bitrates. While you lose some quality with those lower settings, they are also more widely compatible and make the storage space issue more manageable.

There are also various effects and looks that you can apply in-camera if you’re not inclined to do that on a computer in post.

I was a little surprised to see that it uses the older micro-USB style port rather than the newer USB-C system. It’s falling a little behind with this, but it probably meant less development time and expense. It’s not a big issue by any means, but it does limit the in-camera charging speed and means more cable juggling when on the road.

It also has a micro-HDMI port for sending a video signal out from the camera.

The a6400 is sold a body only or bundled with a 16-50mm zoom lens or 18-135mm zoom lens. It’s so similar in build and layout with other models in the lineup, such as the a6300 and a6500, that many accessories will work on all of these models, even things like underwater housings.

Instruction Manual for the Sony a6400

You can find the online manual here.

By default, the a6400 doesn’t come with a memory card. I’ve put together a more detailed set of recommendations on SD cards for the a6400 separately, but if you’re just after a quick recommendation, the SanDisk Extreme V30 card is a good place to start that combines good value and reliability and has the virtue of being readily available at retailers.

The a6400 comes with a rechargeable battery. If you’re looking for a replacement or spares, the model number is NP-FW50. You can get the Sony-branded original, of course, but some of the third-party aftermarket brands like Watson and Wasabi Power also make good-quality batteries that are compatible and significantly cheaper.

There’s a lot to like about the Sony a6400. I’ve found it to be a solid all-around performer, and it’s in a small, compact package. In terms of the lineup, it fits quite squarely in the middle of the Alpha range. It has several features and upgrades that make it a useful step up from the entry-level a6000 while not having some of the higher-end features (and price to match) of the full-frame cameras like the a7 III or a7r III.

The updates from the a6300 are generally incremental, but they’re all squarely steps in the right direction. The image quality is very good (or even better than that, if you consider the price point). The handling and the array of features are also very good. In fact, even if the update feels somewhat uninspired, there’s also really nothing that comes to mind that’s objectionable about this camera, and if you’re looking for a solid performer as either a small package for travel or everyday photography or as a backup camera for your main rig, the a6400 is well worth a look.

Check the current price and availability of the Sony a6400 at:

It’s available in a few different configurations, ranging from body-only to bundled with either a 16-50mm zoom lens or a 18-135mm zoom lens. You can also find good deals that include a bunch of accessories.

Images and product information from Amazon PA-API were last updated on 2022-09-25 at 21:00. Product prices and availability are accurate as of the date/time indicated and are subject to change. Any price and availability information displayed on Amazon Site at the time of purchase will apply to the purchase of this product.