The Benro GoTravel 2 GC269TB2 is a carbon fiber travel tripod that folds up into a small, portable package but offers impressive stability. It also has a couple of tricks up its sleeve. 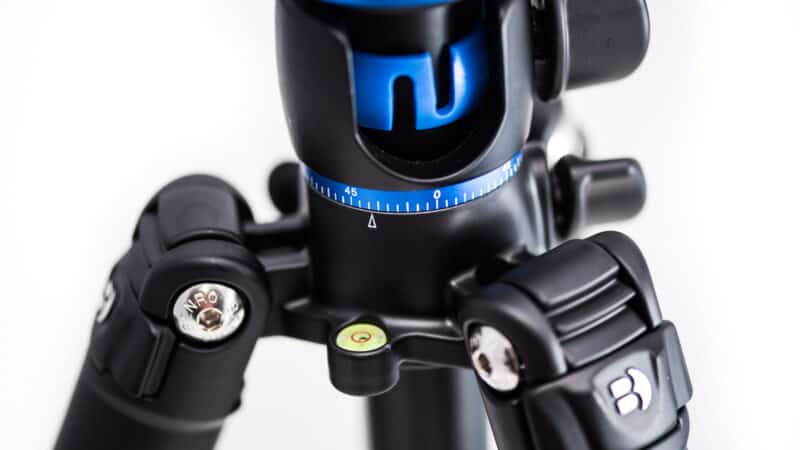 For this latest installment to my ongoing series reviewing travel tripods, I’m looking at the Benro GoTravel 2 GC269TB2. It’s a carbon fiber travel tripod with a load rating of over 30 pounds but folds up into a small, portable package thanks to the legs folding back on themselves. It retails for around $525.

The legs extend in 5 sections with twist locks, and the sections slide in and out smoothly (more smoothly than with some others).
A ratchet at the top locks them in place in three possible angles, from a regular stance out to splayed wide. Unlike some tripods, the ratchet lock isn’t spring loaded–it’s entirely manual, so you need to pull it out to move it and make sure that it’s securely pushed in to lock it in place. I personally prefer spring-loaded ones, but the manual ones work well so long as you make sure it’s properly in place to lock.

The twist locks are more substantial than on some other tripods, very easy to grip, and lock tight. As with some of the other new twist locks, it’s not purely linear in the way it locks. There’s a point just before it is rotated as far as it will go that it actually locks the leg in place. I like this approach because it prioritizes securing the legs rather than requiring that the lock be twisted as hard as it will go. I’ve not run into any issues with the sections slipping–the locks have worked well.

Fully extended, the legs get the tripod to a reasonable height–about 55 inches (1.4 meters). With the head and camera, that’s not quite eye level for me, but it’s a comfortable shooting height.

As with any of the others in this class of travel tripods, the bottom-most section of each leg is narrow. To maximize stability, if I don’t need the extra height, I often leave the bottom section retracted. But even fully out, there’s not much flex in them at all.

It comes with unusually large rubber feet installed, which have an angled base to maximize grip. And the feet are removable, so you can swap them out for spikes or some other kind of attachment if you like–a set of steel spikes are included in the case pocket.

It comes with a Benro B2 ballhead. There are three dials on the base. One controls the lateral rotation, another is the main clamp on the ballhead, and the other, smaller one, is for controlling the amount of drag (or tension).

It comes with an Arca Swiss-style quick release plate that has anti-slip locks, and there’s a bubble level on the QR dock. The QR dock knob has a quick-release mode by pulling it out.

In basic usage, the center column works just like any other–it extends up and down, with about the only thing making it ever so slightly unique being the measurement markings along its length.

It also comes out completely, and you can unscrew one of the legs, attach the two parts, and have a monopod as well. That, in itself, isn’t that remarkable–quite a few of the current generation of tripods offer that feature.

But you’ll also notice a prominent “patented” stamp at the top of the column.

That refers to a mechanism that allows you to rotate the column 90° so that it’s lying horizontally. That can be particularly useful when shooting straight down or up, such as shooting macros of wildflowers, for example, or looking for an angle that the traditional tripod position doesn’t allow.

The mechanism that enables this is a piece of bright blue plastic inside the column. Benro calls it the Center Column Turret Pivot Mount. To make it work, you extend the column as far as it will go, push in a small button at the base of the column, and then flip it.

The whole thing is quick and easy to use. One concern I have is that the pivot mount is entirely plastic, and I’m not sure how well it will hold up to repeated use. You can feel a bit of give in it when the column is mounted horizontally. While I haven’t run into any issue with it, when looking for potential weak points, that stands out at the top of the list.

It comes with a reasonably sturdy soft case. Inside you’ll find a set of steel spike feet, an Allen key, and a counterweight hook that you can attach to the base of the column.

The Benro GoTravel 2 is a nicely thought out and well-built tripod. Its locks and overall functionality are solid, and it is stable.

I have only two quibbles with it. One is that I don’t love the fully manual leg angle adjustment locks. And the other is pure speculation that the special pivot mechanism might be a potential point of failure with heavy use.

Aside from those two things, I’m impressed. Even very small things, like the gripper feet and larger twist-lock grips, contribute to the overall impression that this is a very good tripod that justifies its price of a bit higher than some of its competitors. I’ve previously reviewed the Benro C1682TV1, a smaller, lighter tripod. To my mind, the GoTravel 2 is a better tripod.

I found it to be stable, comfortable holding a Nikon D810 with a Nikon 80-400mm zoom, which makes sense with a load rating of over 30 pounds.

And if you’re looking for the flexibility of mounting the center column horizontally, the patented pivot mechanism is something unique to this tripod.