Benro says its Travel Angel II tripods are Triple Transfunctional Tripods. What that means is that it transforms into a tripod, monopod, or walking stick. Here’s a hands-on review of how it performs. 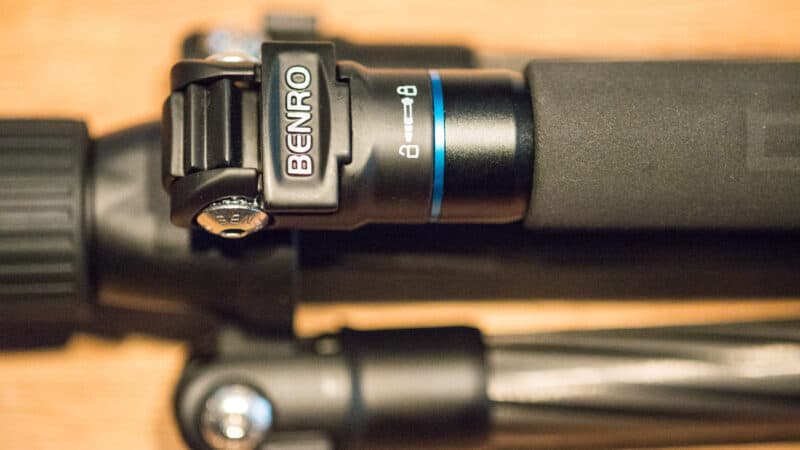 What that means is that you get a tripod, monopod, and walking stick in one. While I can certainly see situations where having a walking stick available might come in handy, I consider that as a bit of a gimmick. More important to me are the tripod and monopod functions. It’s not the only travel tripod that can be used as both–the MeFOTO Globetrotter, for instance, can also do it–but it can be a very useful feature if you’re not inclined to carry a dedicated monopod around with you.

This is another in my series in search of the best travel tripod. You can find the other reviews here.

The Benro Travel Angel II is another of the travel tripods that folds back on itself. This feature is something that Gitzo pioneered in its travel tripods, and it makes a real difference in being able to keep the overall package compact when folded up to the point that putting the tripod inside your carry-on is entirely possible.

The legs have three angles they can be locked at, ranging from the regular stance to essentially flat, where the feet are splayed wide, and the tripod is set close to the ground. To get even lower, you can remove the center column and swap it out for a short column (supplied).

You can also create a monopod. The leg wrapped in foam unscrews from the body. By itself, it’s tall enough to be a walking stick, and in a nice touch, a wooden handle with an embedded compass is included, as is a hand strap. You just screw them on the end. You can use it that way as a monopod–Benro includes it on its feature list as “compact monopod” mode–but for most people, it’s not tall enough for eye-level shooting while standing. To get it to a height that’s more comfortable for standing shooting, you unscrew the center column and attach that to the leg. That gives you the extra height to be shooting at eye level.

The angle locks aren’t spring-loaded–you have to manually push in the lock. But once in place, they’re secure. While I prefer spring-loaded ones like the ones Gitzo Traveler series uses in part because they make locking and releasing is easier to do with one hand, the ones here do what they’re supposed to do. With the Benro, you release the lock by pulling out the mechanism and then folding the leg.

The legs extend in four sections with rotating twist locks. The locks are rubberized and offer a good grip. Benro claims that the twist locks use something they call their “Dust Resistant System.” How well that works in practice is a bit hard to assess independently, but with proper care, twist-locks are reasonably good about keeping dust out and preventing lock-ups.

The rubber feet unscrew. A set of steel spikes are included, which is a nice touch.

It comes with a Benro V1 ballhead. It has an Arca Swiss-style plate (a quick release plate is included). A single large knob locks the ball, while another locks the lateral rotation. There are degree markings for lateral rotation and a bubble level on top. Overall, the head is very, very similar to the one on the Induro Grand Turismo.

It’s rated to hold up to 32.5 lbs, which is plenty for the kinds of uses you’re likely to be using a small tripod like this for.

The kit comes with a padded case. It’s reasonably well made, although it isn’t as robust (or as bulky) as the one that comes with the Induro Grand Turismo.

A set of steel spikes is included. As is a wooden knob handle if you’re using it in walking stick mode.

Overall, this tripod is very similar to the Induro Grand Turismo that I reviewed recently. Differences between the two are, for the most part, pretty minor.

Both are well-made and feel good to use. Both have essentially identical specs. Both come with a case, although the Induro one is more substantial and provides better protection. Both have removable feet, and both come with steel spikes. Both use the same kind of locking mechanisms for both extending the legs (twist-lock) as well as setting the angle of the legs (manual ratchet). Both come with an Arca Swiss-compatible head that operates in the same way, with one large knob for tightening the ball lock and another for locking the lateral rotation. Both come with a short center column that you can swap out with the regular one to get closer to the ground for a change in perspective or for low-down macro shots.

The key feature that the Benro has that the Induro lacks is that one of its legs detaches to create a monopod or walking stick. So you’re really getting a tripod and monopod in one.

Something about the Induro feels just a tad more sturdy to use. But the monopod capability of the Benro certainly has its appeal.

If none of those features is a deciding point, it really comes down to price. And the Benro is about $70 cheaper than the Induro.

Overall, the Benro C1682TV1 Travel Angel II is a very capable tripod that is well worth looking at. It’s sturdy, small, and light. So long as you’re realistic about supporting heavy gear and still conditions, especially when fully extended (as you have to be with all compact travel tripods), it’s a solid performer.

Images and product information from Amazon PA-API were last updated on 2022-06-30 at 01:10. Product prices and availability are accurate as of the date/time indicated and are subject to change. Any price and availability information displayed on Amazon Site at the time of purchase will apply to the purchase of this product.