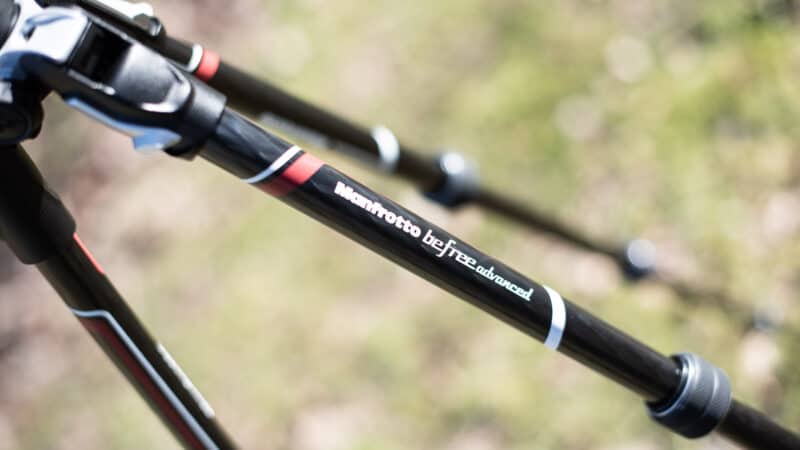 This one is called the Befree Advanced. As you’d expect from the names, they’re quite similar. Both are carbon fiber. 1 Both are similar sizes and weights. And both come with a small ballhead included.

But there are two key differences:

Like many other travel tripods these days, the legs fold back on the main body of the tripod to create a small package. It was an innovation first made in Gitzo tripods, a premium sister brand of Manfrotto. For travel, the whole thing packs down to a shade over 16 inches (41 cm) and weighs 2.8 pounds (1.3 kg). That’s on a par with similar tripods on the market, although a little on the heavier side.

The legs extend in four sections. They lock in place with twist locks. They have rubberized grips that are reasonably grippy with cold or wet hands but, at the same time, don’t stand out as the best available.

Manfrotto calls it their M-Lock system (a registered trademark, apparently). It’s a linear rotation lock, which is simple and works, but some of its competitors have what I regard as a subtly better approach. They add a slight step at the beginning of the rotation so that it’s not directly linear. That serves as a safety mechanism to ensure that the leg is less likely to collapse even if you haven’t rotated the lock as tight as it will go. The Befree Advanced has the simpler approach of a linear locking rotation. That’s not bad–but subjectively speaking, it’s just what I’d consider the second-best approach.

I have a few different quibbles with this tripod, but one of my biggest is with the locking mechanism used to lock in the angle of the legs. Manfrotto calls it a Side-Pull Selector. It’s fundamentally a spring-loaded ratchet mechanism, but the lock/unlock lever is actually a slide lock on the side that you’d normally operate with your thumb. So while it ultimately does the same thing–unlocks the ratchet to allow the angle of the legs to change–it goes about it in a different way. But it’s not what I’d call an improvement–in fact, I consider it a step backward. It’s plastic, doesn’t feel particularly sturdy (there’s a lot of give (or wiggle) in it), and it’s surprisingly hard to use. It strikes me as an unnecessary “improvement” and of doing something differently simply for the sake of doing it differently. Everyone obviously has different preferences, and some users might like it, but I’m not a fan.

None of the legs have foam/rubber grips. Those are only really for convenience when shooting in cold temperatures or to add extra grip when handling the tripod, and it doesn’t make much difference in general shooting.

In terms of sturdiness, the thinness of the lower leg sections does introduce some flex. That’s an issue that other small tripods have, too–it’s a symptom of trying to keep things as small as possible. But it makes it less suitable for larger DSLRs. If you’re using the tripod with smaller cameras, such as mirrorless bodies with small to medium lenses, you’ll be in much better shape. It’s not an ideal choice for very long exposures or time-lapse shooting in even light breezes, though, even with those smaller cameras, because there is a real risk of movement during the course of the exposure. It’s mitigated by simply not extending those lower sections, but you then obviously pay the price of reduced overall height.

It has rubber feet. They’re not removable. And they’re quite small and don’t afford a lot of grip.

The center column is roughly 12 inches long and is a straight up and down mechanism (i.e., it doesn’t swing out 90 degrees to the side, as some tripods to help with straight-down shooting).

The locking mechanism for the center column is a twist lock. It’s plastic and doesn’t feel particularly refined, but it works well enough.

There’s no hook on the bottom of the column to attach ballast, so if you want to do that, you’ll need to jury rig something with a cable tie or something similar.

Similarly, the main locking knob on the side is plastic and feels, well, cheap. It has a few large protrusions for grip rather than a ridged or rubberized surface. It works well enough, although I don’t find it especially easy to use with cold or wet hands or when wearing gloves.

One feature this head does have that isn’t often included on very basic ballheads is that there’s a tension fine-tuning dial built into the main locking dial. That’s useful for more precise framing to set smooth but controlled movement even with the weight of the camera.

The ballhead is included, and I’ve not seen a version of this tripod sold as legs-only. But the head is removable, so you can switch it out for another standard head if you like. The base plate isn’t very wide, so it’ll work best with narrow-base heads (which also makes the most sense with a small tripod like this, obviously).

What’s In the Box?

I confess that I’ve been disappointed with the smaller Manfrotto travel tripods I’ve tried. As a brand, they’ve been market leaders for a long time. They make excellent studio and mounting accessories, and I use more than a few of their products regularly and love them, from their excellent pano heads, mounting accessories, and I’ve used some of their heavier-duty tripods as reliable workhorses for years. And Gitzo travel tripods, another brand owned by the same company (Vitec Group) rank right up there among my favorites.

But for whatever reason, something seems to get lost in translation with the Manfrotto-branded travel tripods. They’ve struck me as trying to be too clever by half and ending up falling short.

This one is another that I’ve been disappointed by. It’s not that Manfrotto doesn’t know how to make excellent tripods and supports–they do. But these small travel tripods just seem to scream two things: cutting costs and innovating for the sake of being different rather than for making things better. Perhaps they’re just trying extra hard to differentiate from the premium Gitzo tripods and stand out from the Chinese-manufactured crowd.

I have three main quibbles with the Befree Advanced:

You can find the Manfrotto Befree Advanced at B&H Photo for $320. There’s also an aluminum version that is a shade shorter when folded but significantly cheaper at $190.