The Ricoh Theta S offers a simple and inexpensive way to shoot 360° virtual tours. So how well does it work for architectural and real estate virtual tours? 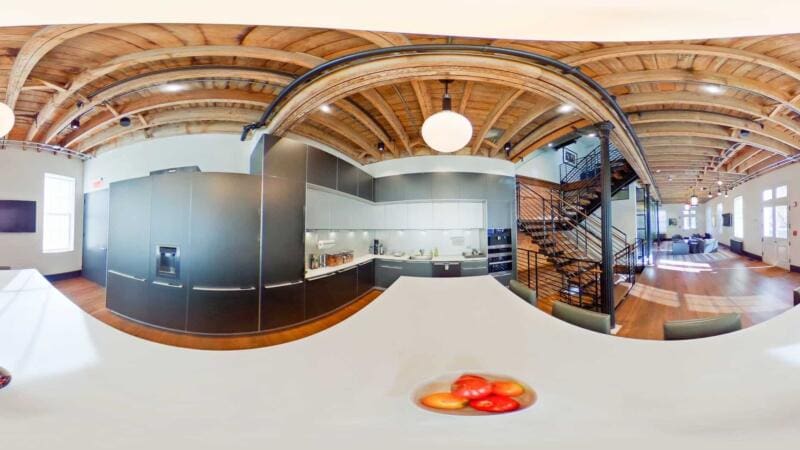 There are several new cameras that take spherical panoramas. For a long time, it’s been possible to shoot spherical panoramas with pretty much any old camera. But that has involved quite a lot of post-processing to stitch all the images together in a way that can be used for a virtual tour on a web page or on social media. The thing that’s different about these new cameras is that they do it in one click and process the image in the camera. It’s much quicker and simpler, and it opens up possibilities for shots that weren’t really possible before.

Ricoh has been a pioneer with this type of camera. The Theta S is their second-generation camera. It doesn’t look much like a camera–it looks more like an oversized thumbdrive—but it has two cameras and two sensors that shoot in opposite directions. The stitching of the images is done in the camera. And Ricoh has done some smart things in making it quick and easy to share the images.

One of the opportunities offered by these cameras is to shoot real estate or architectural virtual tours cheaply and quickly. So I’ve been trying it out for that purpose, and here’s what I’ve found.

First, though, here’s an example of what I mean. It’s an interactive 360° panorama that views can spin around and explore themselves.

This is the interactive version that’s created from the still image at the top of this page. Because it’s a still image shot from a fixed point, there’s no way to move through the space–you can just rotate and zoom in and out. But with other software, like Pano2VR, you can connect several of these together to create a more complicated virtual tour–moving through rooms of a house, for example, or galleries of a museum.

The gist, though, is that the 360° panorama can create a bit of novelty factor to grab attention as well as provide the viewer with a better sense of the space.

Lighting is always a major challenge with architectural photos, and that’s true many times over when it comes to 360° spherical images.

It’s very likely that your scene has areas of shadows and brighter areas. There are two settings in the shooting modes to help with this. The first is the DR compensation (i.e., dynamic range compensation). It takes a single photo and, through processing, boosts the shadows and smooths out highlights. If you’re used to using Lightroom, it’s basically the same thing as using the highlights and shadows sliders, except you have no control over the amount. The end result is a relatively subtle difference, but it’s good for handheld shots or where the subjects in the frame are moving.

Assuming you’re using a tripod or stand, for architectural shoots there’s a much better option: HDR Rendering. This takes several shots at different exposures and applies an algorithm to merge them so that it keeps the best parts of the various parts to preserve shadow and highlight detail. It’s a much more aggressive approach, and also much more effective, than the DR Compensation option. But a prerequisite is that the camera is mounted on a tripod or stand, because if there’s movement between the individual shots, you’ll end up with a faulty image.

The good news is that it’s all handled automatically in the camera, so there’s no need to mess with HDR software. Switch the HDR option on and click the shutter. It takes a little longer to render, but it’s not more difficult than a regular shot on default settings.

The bad news is that you have no control over the way in which the HDR algorithm is applied–it’s either take it or leave it.

Here’s an example, without any post-processing applied to the images: 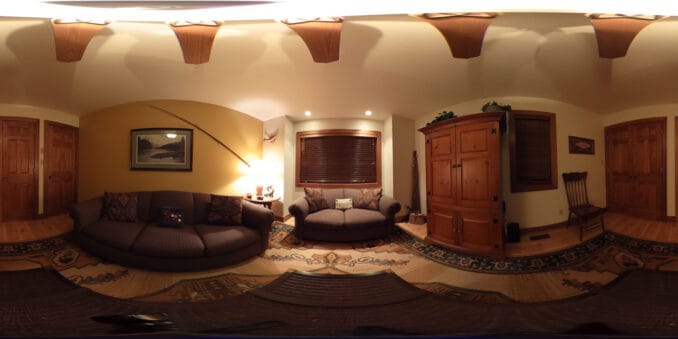 Each spring about 1,700 cherry trees around the Tidal Basin bloom in a colorful but brief floral display that brings large numbers of visitors to the region. The latest information on Washington DC’s cherry blossom bloom of 2014 is available here. 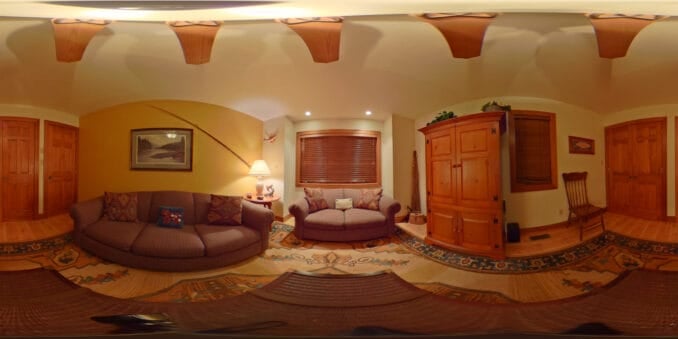 Each spring about 1,700 cherry trees around the Tidal Basin bloom in a colorful but brief floral display that brings large numbers of visitors to the region. The latest information on Washington DC’s cherry blossom bloom of 2014 is available here.

In practice, it certainly does even out the lighting and bring out the details in shadows and highlights. It also has the undesirable side-effect of creating some rather garish colors that are overly warm. Thankfully, that’s easy enough to tone down with some simple editing in Lightroom or any other image editing app by dialing down the saturation and perhaps adjusting the white balance.

After some light editing, and patching out the tripod, it ends up like this:

The camera actually creates a stitched, flat jpg. By itself, it looks like a long and distorted photo, which is, after all, what it is. But feed that image into an app or software that’s capable of converting it into a 360° panorama, and you’ll magically be able to interact with it.

I’ll have a separate post soon about ways to share the interactive panorama, but there are currently four main avenues for sharing the Theta S panoramas:

Ricoh’s Theta Service. Ricoh has their own service for sharing spherical photos and videos that’s designed as a support for the Theta S. It’s fairly rudimentary, and it’s not really a social media destination, but it’s a useful place to upload your image and have it display as an interactive spherical panorama. You can then embed it elsewhere. A catch is that you’re stuck with a “Theta” watermark on it.

Self-Hosted. The first two options are simple and quick, but you have limited control. You can also host the panorama on your own site. It gives you maximum control, but the cost is that it takes more work and requires more setup. You’ll also need your own website (obviously) and a plugin or script to display the panorama. How to do it is too involved for here, but it’s definitely possible—the ones on this page are self-hosted, for example. I’ll be doing a write-up for some options for self-hosting spherical panoramas shortly.

Unfortunately, there’s no remote shutter release for the Theta S–I wish there was. But there is a mobile app that can be used for that purpose (and more). And for real estate and architectural virtual tours, that remote function is essential. You don’t want to be in the frame, after all.

The remote app connects via wifi. The camera makes its own closed network that you can connect your phone’s wifi too, so you don’t need a separate router.

The remote app gives you a view of what the camera is seeing as well as providing access to the various settings and modes of the camera. Once the photo has been taken, you can preview it as an interactive spherical image right on the phone. And, of course, the simplest but most important function–it has a shutter button.

Another option, if you’re quick, is to use the self-timer option. On the plus side, it can be operated without using the mobile app–here are the instructions. On the minus side, you only have 5 seconds.

It might be possible to clone yourself out of the shot later, but that’s going to depend on the individual image and will involve using something like Photoshop.

There are a few ways to handle the issue of the tripod in the bottom of the frame, or nadir, of the panorama.

The simplest is to leave it in and ignore it. You can minimize the amount of frame it takes up by using a tripod or stand with a small footprint.

You can also patch over it, either cloning it out or putting a branding patch over it with a logo or copyright notice. But those take extra work and extra software. The method I use, Pano2VR in combination with Photoshop, works wonderfully but involves several steps. That’s what I’ve used in the examples on this page.

If you’re going the self-hosted route, there’s another option. Some of the pano display apps will let you limit the vertical tilt of the viewport, in which case you can simply prevent the view from pointing completely down.

So are the spherical panoramas created by the Ricoh Theta S usable for architectural and real estate clients?

Yes, with some pretty major caveats. In terms of convenience, speed, and price, it’s hard to fault. It pretty much aces all of those.

The issue is quality. And underlying that is the matter of expectations. For clients focusing specifically on creating a 360° virtual tour as a centerpiece of marketing, there’s a good chance they’re expecting high-end image quality. And while the image quality you get out of the Theta S is good for a dedicated 360° camera, it doesn’t compare with the kind of quality you can get from a high-resolution panorama shot with a DSLR and stitched and post-processed on a computer. For architectural clients like that, I use a high-end DSLR with something like a Manfrotto 303SPH QTVR Spherical Panoramic Head. It’s slow, cumbersome, heavy, and expensive, and there’s a lot of stitching and post-processing involved before you end up with a 360° spherical panorama. But the resolution and quality far exceed what you can get out of the Theta S.

But there are plenty of situations where the quality falls squarely in the “good enough” category. Where I’ve found the Theta S to excel is in a new opportunity to offer clients something that they weren’t otherwise thinking of. If I’m shooting regular still photos of an architectural shoot, I’ll often take a few extra minutes to take some spherical panoramas with the Theta S that I can then offer (or sell) to the client for their social media use or their web page. They make for fun social media posts that grab attention with minimal extra expense or effort on my part.

And it’s for that reason that the Theta S has found a regular place in my camera bag. It’s not that it’s a replacement for high-end virtual-reality shooting but that it creates a new opportunity.

It would also come in as a particularly handy option where budget constraints are tight. Most real estate shoots, for example, or for holiday rental listings (as far as I’m aware, AirBnB doesn’t currently allow 360 panos in their listings). And Google Street View has now embraced the Theta S along with other non-DSLR cameras.

So even if it’s not a replacement for high-end virtual tour shooting, the Theta S does have a lot of attractions as an inexpensive, simple, and quick way to create decent-quality spherical panoramas.