Shooting spherical 360° panoramas with a Ricoh Theta S has a distinctive challenge: having the tripod take up as little of the frame as possible. Here are the stands that have become my favorites. 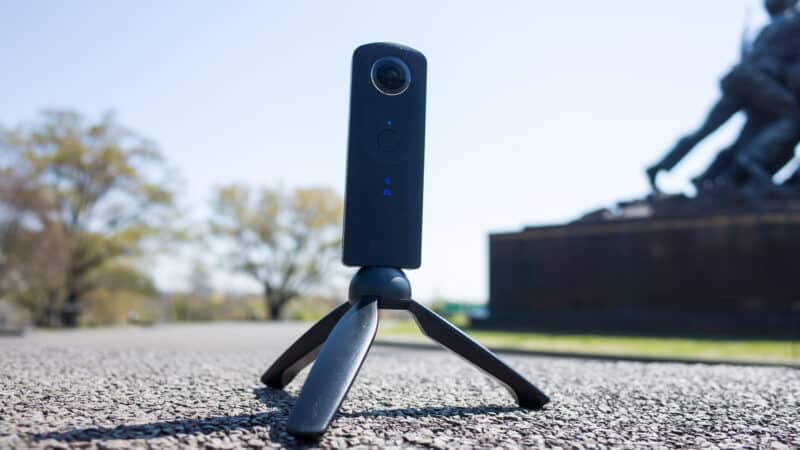 I’ve been using Ricoh Theta S cameras since they first became available last year, and as any other users of that camera have also found, one of the big challenges of a 360° camera like this is keeping out of the frame. If you hold the camera in your hand, you’ll end up with your thumb and hand prominently in the shot. And while you can use the phone app to trigger the shutter, you’ll still need to stand the camera on something.

You can, of course, use any tripod. But there’s a catch that’s distinctive to spherical photos and footage when using most standard tripods, and that is that they have a relatively broad footprint. That helps with stability, but with a 360°, it also means that it takes a sizable part of the image real estate when you look down. That’s not a deal-breaker issue, but I prefer to try to maximize the image space and keep the tripod footprint as small as possible.

That view—looking down—is known as the nadir of the spherical image. With a traditional stitched spherical panorama, there are ways to shoot around it with some creative maneuvering of the camera and tripod. And you can, of course, edit still photos in post-processing to patch the nadir (or any other part of the image, for that matter); my preferred way of doing that is with Pano2VR’s patch function. Pano2VR will also let you limit the view screen, so you can just make the nadir off-limits. But those things are much harder to do with video without overlaying a solid patch.

So if you’re working with the 360° video function or if you want to keep post-processing still photos to a minimum, there are also ways to minimize how prominent the support is in the frame by using a support that has certain features. Specifically, you want something that’s tall but still has a very small base footprint. The Ricoh Theta S is very light—only about 4.4 oz (125g)—and has a very simple center of gravity, so you don’t need anything especially heavy-duty to put it on.

I’ve been experimenting over the past seven months or so with different supports for the Ricoh Theta S. These are the two I’ve settled on as my favorites. Each has its benefits in certain situations.

As its name suggests, the Accmor Pro Selfie Stick is a glorified selfie stick. But it comes with a couple of features that make it especially useful for a Ricoh Theta S.

It’s an extendible selfie stick that uses twist locks and comes with both a GoPro and regular tripod attachment on top. It’s lightweight and compact and stashes easily in my camera bag. It extends up to 39 inches (about a meter) and weighs under 5 ounces (about 137g grams).

But the part I find particularly useful is that it comes bundled with a compact and detachable tripod base. That can be used to hold the whole stick upright or detached to be used on its own, like this:

And in situations where using a tripod is problematic, which might be for any number of reasons, you can use it as a selfie stick above your head. That’s how I took these panos in the Freer Gallery of Art where the security guards weren’t happy with anything that looked remotely like a tripod.

They can be found at Amazon. Other manufacturers have very similar products, like this one.

But it’s not perfect. The biggest issue is that that very small footprint relative to its height comes with a high risk of it falling over if the ground isn’t perfectly flat or there’s a bit of a breeze. I’ve had more than a few shots ruined when it’s toppled over. And in a bad case, because of the way the lens of the Theta S protrudes, you can very easily scratch or break the lens if it falls. So I’m very careful about using it in those kinds of conditions. Which is where the second option comes in…

The Griffiti Nootle Stand is more like the base of an old-fashioned music stand. On the positive side, it is much more stable than the selfie stick tripods, especially on uneven ground, thanks to its significantly wider base footprint. It’s also a lot taller than a standard selfie stick, rising up to around eye level. Here’s an example of it standing fully extended next to a fully extended Accmor Pro Selfie Stick:

It’s that height relative to its low-profile base that makes it better suited for spherical panoramas than a regular tripod.

Here’s an example of its footprint in the nadir. Again, the shadow is rather noticeable because it was taken a beautifully clear morning, but the tripod base itself is pretty small in the frame.

On the negative side, it’s also bulkier than most selfie sticks, and is therefore less convenient for traveling. Here it is fully collapsed (top):

The base doesn’t unfold quite as smoothly as I’d like and requires two hands, and while the click locks on the central column work perfectly well, I prefer good quality twist locks most of the time.

The small ballhead on top works well and provides an easy option to level the camera if the ground isn’t flat.

You can find them at Amazon. It comes with a small ballhead with a regular tripod attachment and a surprisingly good travel case. 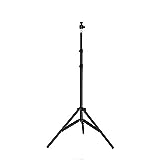 Which One Is Better?

I use both, but I don’t often carry both with me. For travel where using the Ricoh Theta S is something I might shoot with but isn’t the main purpose, I’ll typically throw the Accmor in. But if I’m heading out with the intent of mainly shooting with the Ricoh Theta S, and particularly if I want the extra stability for 360° video (like this), I’ll take the Nootle Stand.