The Ricoh GR III has a built-in macro close-up shooting mode. Here’s how to enable it and what it does. 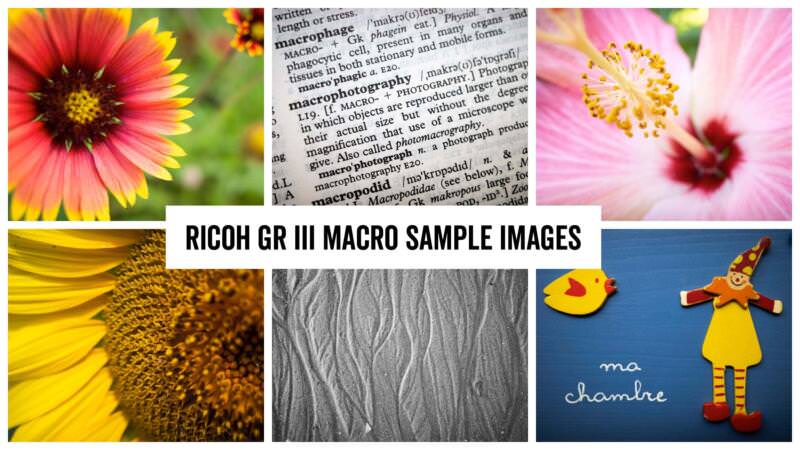 The Ricoh GR III is a pretty remarkable little camera. The GR series goes back a long way–back to film days–and it has a cult following, particularly for street photography. I’ve had the past few editions and really like it as a pocketable take-anywhere shooter.

One of its less-heralded features is that it has a built-in macro mode. Macro isn’t something you naturally think of when considering a camera built for the street, but I’ve found that it comes in surprisingly handy.

The GR III’s macro mode allows you to take photos that are much closer up than the camera typically focuses—it works in the range from 6cm to 12cm (2.36 to 4.72 inches). Which is a closer focus than some of the GR III’s main competitors. 1

And even if it might not appear to be an essential feature, I’ve found it surprising how useful it can be. If you’re using the GR III as a travel camera or shooting street photography, having a macro feature can open up all sorts of extra photographic opportunities. It might be the textures of an ancient door, the tiny artistic details of a doodling graffiti artist, a bug on a flower, shells on a beach, some of the local cuisine, or any number of other tiny subjects that can only be captured up close.

In other words, macro is another feature that adds to the GR III’s impressive versatility.

How to Turn on Macro Mode on the Ricoh GR III

Macro mode on the GR III is easy to use. There are no lenses or adapters to attach or dials to rotate. You simply press the top of the rotary dial on the back of the camera. It has a flower icon on it.

Once you turn it on, you’ll see a flower icon on the left-hand side of the back screen (if you’re using the on-screen display, obviously). 2

Alternatively, you can enable Macro mode through the menu system. You can find it under:

How to Turn OFF Macro Mode on the Ricoh GR III

Turning off Macro mode is as simple as pressing the same button. But you do have to turn it off—otherwise, it stays on.

So if you’re shooting macro, then go to shoot a subject further away and can’t get it to focus, it’s usually because the macro mode is still on.

You can also cancel the Macro mode through the menu system. It’s under:

Here are some examples of macro close-up photos I’ve taken with the Ricoh GR III recently. I’ve tried to include a sampling of different sizes and subjects to give a bit of a sense of what it can do under varying shooting conditions.

There are distinctive challenges with all macro photography, from camera shadows to trying to establish critical focus (especially when shooting handheld or the subject is moving). While there’s no particular solution to these with the GR III, I do find the tracking focus feature to be useful when shooting close-ups handheld.

If you have the focus set to Snap or Infinity, the Macro mode will override that by activating the Select AF focus mode.

Again, there’s no particular reason you have to use the official GR neck strap, but there is one. The main part is leather, and it even has a discreet, embossed “GR”.

There’s even an official “GR” leather hand strap! But, again, aside from the branding, there’s no special reason to use the official strap. If you do use a different one, you might need D-rings if the thread doesn’t go through the camera’s small attachment loops.