The Sony RX0 is tiny and looks like an action camera that’s built for shooting video, but it’s a surprisingly capable stills camera as well. Here are some example photos I’ve taken with it to give a sense of its real-world performance. 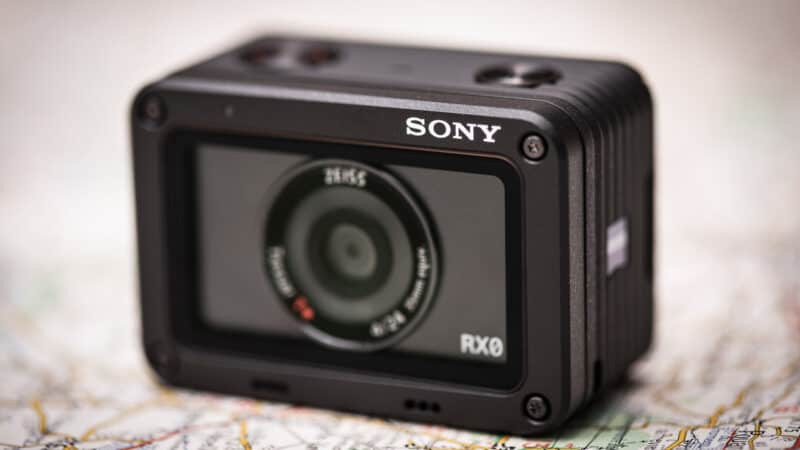 The Sony RX0 camera looks for all the world like Sony’s answer to GoPro, but its looks are a bit deceiving. Yes, it’s tiny, rectangular, and waterproof, but it’s not accidental that Sony has put it in their digital stills camera series (its full model number is DSC-RX0) rather than with their camcorders or action cams series. It has some unique and impressive video features, but its photo capabilities strike me as the most developed.

It has a 15MP sensor, 24mm (35mm equivalent) focal length lens, and shoots RAW (.arw). 1 It has multiple shooting modes, including a full manual mode. You can choose from different drive modes, including bracketing, as well as different focus modes. In short, its features and settings for shooting still photos are in many respects the types of things you would expect on larger, full-featured cameras like market-leading Sony’s mirrorless cameras.

Sony’s marketing for this camera has treated it as a niche offering, with an emphasis on professional video. While it’s a little outside the primary target use, it has grown on me for travel photography. There are quirks to using it, such as the slowest shutter speed available being 1/4 second. And there are frustrations, such as the camera overheating and a slower-than-it-should-be automatic focus. But the RX0 is rugged and discreet and takes great photos. It has therefore earned a place in my regular travel kit, and I often find myself taking it out when I might otherwise have reached for something like a Ricoh GR II.

I’ve posted a detailed review of the Sony RX0 separately. I’ve also posted some examples of its high-ISO photo capabilities.

What I’m focusing on here is providing some general examples of photos taken with the RX0 under a variety of lighting conditions and with different mixes of tones and detail in the hope that they might be helpful to someone trying to get a sense of how it performs as a stills camera in real-world shooting.

These were all shot in RAW (.arw) and processed in Lightroom. As RAW files, they’ve required at least some processing to be usable, but in many of the shots here the processing has been done with quite a light touch. What I haven’t done with any of these is apply any additional fixes to optical issues like chromatic aberration, noise reduction, or sharpness beyond the Lightroom defaults. Those are things I’d normally address in the workflow, but I wanted to retain any of those issues here to give a better sense of what you can expect out of the camera.

You can click on each individual image to open a full-size version.

Price & Availability of the Sony RX0

The Sony RX0 has since been replaced by the RX0 II, so the original model is harder to find in stores. The key differences between the models don’t really affect stills photo shooting: a tilting back screen, 4K30 video recording, and a thicker body (to accommodate the tilting screen).

2 thoughts on “Photos Taken with a Sony RX0 Camera”