A Grip, Table-Top Tripod, and Shutter Release for the Sony RX0 Camera

The Sony RX0 is compatible with just about any grip that folds out to a table-top tripod. But Sony makes one that adds a built in shutter release. 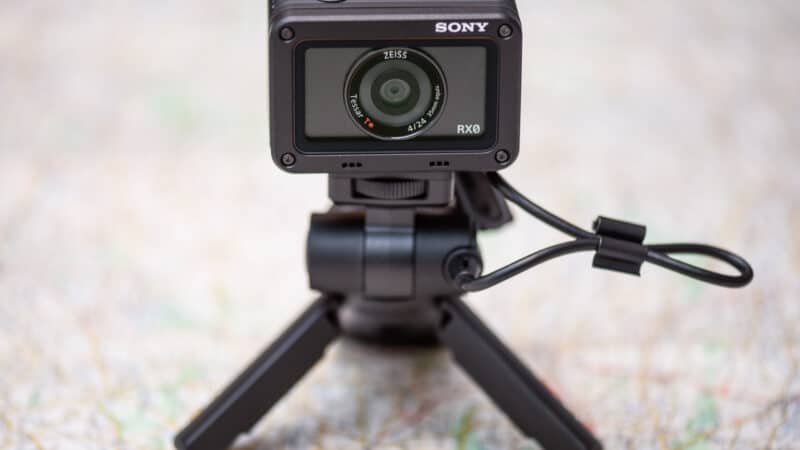 Grips that fold out to small table-top tripods are very common these days, and they come in useful if you’re looking for a versatile but lightweight option to take with you on the go.

The Sony RX0 will, of course, work with just about any of these convertible grips/tripods because it uses a standard 1/4-20 tripod attachment. So there’s no reason you have to use a dedicated one. But Sony makes a small model that makes a particularly good pairing because it adds an extra trick–it has a built-in remote shutter.

Its model number is VCT-SGR1 and Sony has priced them at just under $100, which is much higher than your run-of-the-mill grip/tripod.

It works with several Sony camera models, including cameras like the a6000 or a6500, but I’ve been using it with the Sony RX0, which is about the perfect sized camera for this tiny grip and stand. Some of the larger camera, especially with longer lenses, can become unwieldy with the very narrow center of gravity of this tiny stand.

It’s very straightforward to use. You simply plug in the attached micro-USB cable to the camera.

There are two shutter buttons, one for shooting stills and the other for starting and stopping the video recording. In addition to the convenience of a more comfortably-placed shutter that is less likely to cause bumps than reaching to the top of the camera, you also get a small but useful feature that you don’t get on the camera itself. That is, if you’re going back and forward between stills and video, you don’t have to go back through the menu system every time you switch, as you do if you’re using the camera by itself. Just pushing one or other of the shutters will start that mode.

There’s also a zoom rocker in the middle, but that doesn’t do anything on the RX0 because it has a fixed prime lens.

The RX0 by itself is waterproof. But that’s not true with the doors open, which you have to do to attach the micro-USB cable. So this is not a good option in damp or dusty conditions. Technically, you could remove the cable from the camera, seal up the door, and just use it as a grip or tripod without the shutter functionality, but that’s still going to leave the micro-USB plug exposed.

In addition to the grip/stand, it comes with a lightweight wrist strap that can be threaded through the bottom of one of the legs and a soft pouch.

The cable is attached to the stand and isn’t removable.

Unlike most other remove shutters, this one doesn’t need its own battery power, so you don’t need to pick up batteries for it.

While using it, I couldn’t think that there were ways that it could be improved. For what it’s worth, here are some ideas:

I bought mine at B&H Photo. You can also find them at Adorama and Amazon.

1 thought on “A Grip, Table-Top Tripod, and Shutter Release for the Sony RX0 Camera”

A Grip, Table-Top Tripod, and Shutter Release for the Sony RX0 Camera