Some practical recommendations on which SD cards to get to be able to use all of the Sony RX0’s features. 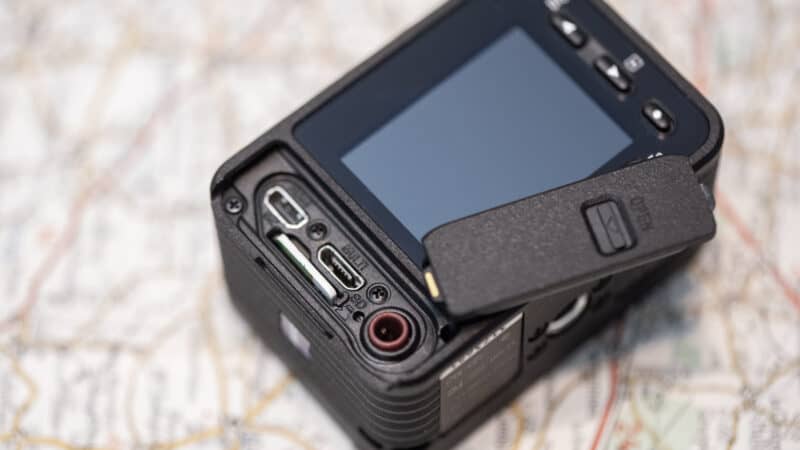 As with many of today’s higher-end cameras, you can’t just put any old microSD card in the Sony RX0 and expect it to work perfectly.

If you happen to have lucked out with the right kind of card, great. But if you use the wrong kind, you can get some unexpected side effects like video recording stopping or the camera freezing up. That’s because some microSD cards aren’t fast enough to keep up with the camera. So if you want to make full use of the RX0’s impressive capabilities, you’ll want to make sure you’re using a suitable microSD card for it.

If you just want to get right to it, here are some quick recommendations for microSD cards that work well in the RX0. You can find more detail below. 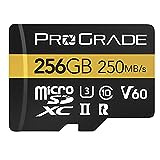 Which SD Card to Choose for the Sony RX0 and Why

While you do need a microSD card that’s relatively fast, the Sony RX0 isn’t the most demanding on memory cards of today’s cameras. The RX0’s most powerful video capabilities involve off-camera recording, so the memory card speed isn’t a consideration specifically for 4K recording. The camera’s highest video modes that use the onboard recording (and, therefore, an internal memory card) are 1080p60. The critical measure, of course, is bitrate, and at the highest setting for on-camera recording (1080p60 in XAVC S HD format), it records with a variable bitrate of around 50 Mb/s. The other formats record at lower bitrates.

When it comes to microSD writing speed, a video bitrate of 50 Mb/s is high-ish, but by no means pushing the envelope. The latest GoPro, the HERO7 Black, records at up to 60 Mb/s, and even cameras like the Sony a6500 (which uses the larger SD cards) record at up to 100 Mb/s. Cameras like the Panasonic GH5 and FujiFilm X-T3 go way higher, up to 400 Mb/s. So 50 Mb/s is respectable and offers very good video quality (especially at 1080), but it’s by no means the bleeding edge of bitrates.

So while you need a fast memory card for the RX0, you don’t necessarily need the fastest, fanciest memory card that money can buy. The problem is that if you look at Sony’s official recommendations, they’re not all that helpful, in part because they don’t add much clarity in terms of choosing from the memory cards that are actually available in the marketplace today.

What it boils down to is that if you’re not going to be shooting XAVC S video, you can get away with a slower card. But when I’m out shooting with a camera, I’d rather be able to use all of its features rather than hobble it by using a memory card that’s not fully compatible. That’s especially true of a camera like the RX0. It’s not just some cheap point and shoot–it has high-end features and capabilities that are going to appeal to people who take their photography and videography seriously. So that’s what I’m focusing on here: cards that are fast enough to work with all of the RX0’s features, including the highest-quality XAVC S video codec mode.

Having been shooting with the RX0 for a while now (and here’s my review), and having been testing the speeds of microSD cards for some time, here are some practical recommendations on good memory cards to get for the RX0. The good news is that cards that are fast enough to use all of the camera’s features are easy to find now and relatively inexpensive.

This is by no means a comprehensive list of every microSD card that will work well in the RX0. What I’m aiming for is to put together some practical recommendations for cards that work well in the RX0 and are a good combination of performance, value, and availability. So that if you’re trying to find the answer to which SD card to get for the Sony RX0, hopefully this will help.

Here are some more detailed recommendations for specific cards.

SanDisk uses a three-part model numbering system in the format SDSQXA1-064G-AN6MA. In this example, SDSQXA1 is the model number, 064G refers to the amount of memory, and the last 5 characters are used by the marketing department for different parts of the world but the cards are otherwise the same. So the first part is the crucial part if you're looking to see which model the card is, and you don't have to take much notice of the last 5 characters.

Samsung makes several excellent microSD cards, but they also have a confusing way of naming their cards that doesn't always make clear what the difference between the models is. The Select is one of their better cards, but it's also very good value.

Like SanDisk, Samsung recycles the series names. The latest version of the EVO Select is available in 32GB, 64GB, 128GB, and 256GB sizes. If you can't find the EVO Select line at your preferred retailer, the EVO Plus line also works well.

ProGrade Digital is a new brand, but they're not just another no-name rebrand that has sprung up from nowhere. They're an American company with a very experienced team. They're focusing on high-end memory cards, and they have no-frills packaging and minimal marketing so far. But I've been impressed with what I've seen so far--their SD cards are among the fastest I've tested and have become a fixture in my primary camera. This brand-new microSD version, the first microSD they've released, isn't the fastest card I've tested, but it's comfortably fast enough.

It's rated for V60 (or sustained minimum write speeds of 60MB/s) and is UHS-II.

Lexar has had some corporate upheaval in recent years, including an ownership change, that has disrupted the availability of their products in retail outlets. But that seems to have settled down somewhat now, and many of their cards are readily available again.

Lexar has always to put more emphasis on marketing the read speeds of their cards--in this case, 1000x or up to 150MB/s--but several of their cards have write speeds fast enough for GoPros shooting 4K video. This is one of the newer ones and is rated for a write speed of up to 45MB/s. It comes in 32GB, 64GB, 128GB, and 256GB versions. It includes a USB thumb drive card reader. 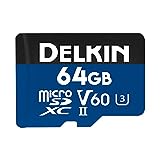 These cards by Delkin are one of the few currently available that come with the new V60 rating for recording 4K and 8K video. It's also a UHS-II card and comes with a UHS-II SD adapter cartridge (most other adapter cartridges are UHS-I).

Delkin as a brand isn't as well known as some of the other brands with bigger marketing budgets, but they've actually been around a long time and I've always had good experiences with them. I use this particular model often in my GoPros and have found them to be fast and reliable. 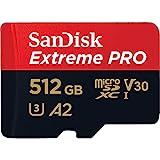 The Extreme PLUS line is a newer addition to SanDisk's product lines and, as you'd expect, this is a step up from the standard Extreme (but a step below the Extreme Pro).

This is the latest version of this card--you can tell it apart by the V30 rating on the card. Older versions didn't have the V30 on the packaging, but in practice even those older versions of the Extreme PLUS cards will also work well; because it's a relatively new line and they've always been among the faster lines, there aren't any older versions that are too slow.

What Size SD Card to Use in the Sony RX0

The most common sizes available for microSD cards these days is between 32GB and 256GB. The Sony RX0 can work with any of those, and is compatible with both microSHDC and microSDXC cards (and, for that matter, basic microSD, but using one of those smaller, older cards doesn’t make much sense anymore). Right now, the sweet spot in terms of storage capacity, convenience, price, and availability is probably in the 128GB or 64GB cards. Of those, I’d be more inclined toward the 128GB size, mainly for the convenience of the extra filming and shooting you can fit on it.

How to Format Memory Cards in the Sony RX0

It’s not complicated to format memory cards in the RX0, but the option is a little buried in the settings menus.

You want to move across to the tab with the toolbox icon. Then you need to scroll through to page 4 of 6. The Format function is on that page.

Once you start that, you get the obligatory warning that you’re about to wipe everything from the card.

When you confirm, it will do its thing and show you a progress bar. It does what’s sometimes known as a quick format, which basically deletes the references to the directories and files but doesn’t drill down to initialize the files at a granular level, so the process should only take a few seconds even for large-capacity microSD cards.

How to Format microSD Cards with a Computer