The Sony RX0 is a tiny but surprisingly powerful camera. Here’s what I’ve found when shooting photos with it in the ISO 3200 to ISO 12800 range. 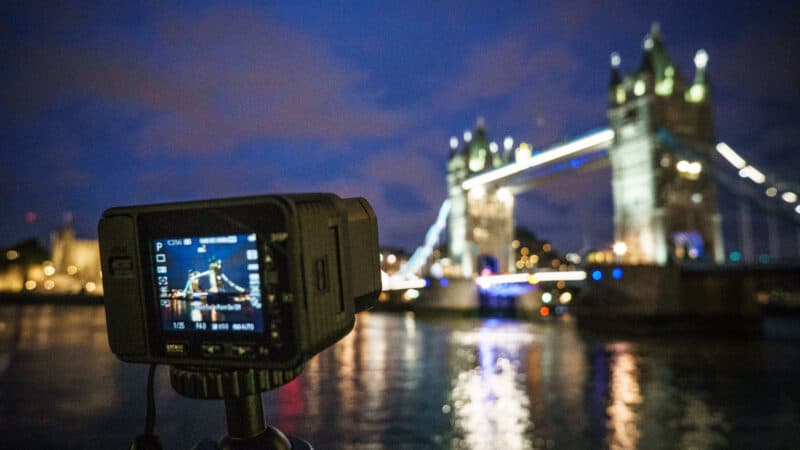 When I’m traveling, I like to take photos in low light. Whether it’s a smoky morning market, a quiet but pretty street at night, or the inside of a grandly decorated cathedral or mosque, there are plenty of times that the scene isn’t going to be picture-perfect bright sunshine. So one of the things I’m particularly interested in when testing out cameras is how they perform in low light. That generally comes down to a combination of lens speed (ie. maximum aperture), image stabilization, and high ISO performance.

The Sony RX0 is an unconventional choice as a travel camera, and it’s not without some issues, but it’s also a surprisingly powerful camera. While it looks for all the world like a GoPro competitor, it’s waterproof, and it boasts an eclectic mix of high-end video features. Yet its pedigree is actually Sony’s DSC digital stills camera line rather than the separate camcorder and action camera lines. That shows in how the RX0 operates. In many ways, it’s more like a miniaturized addition to Sony’s impressive Alpha line of cameras than a GoPro. 1

I’ve posted a more general collection of photos taken with the Sony RX0 separately. I’ve also been putting the RX0’s high-ISO capabilities to the test, and that’s what I’m focusing on here. While the camera’s sensor is small relative to a DSLR or many mirrorless cameras–all of which are much larger cameras–its 1-inch sensor is surprisingly large for a camera this tiny. Combined with Sony’s market-leading expertise with sensors–they make some of the best in the business–it promises very good image quality.

The RX0 has a minimum available ISO of 80, and its maximum is ISO 12800.1 I’m focusing here on the upper end, from ISO 3200 through ISO 12800. And these are with its still images; I’ll tackle video separately. I’ve included some real-world examples below to give a sense of how it performs.

All of the images on this page were shot in RAW. So that we’re getting a better sense of the camera’s performance rather than just how aggressive the noise reduction software is with the embedded previews, the versions here are rendered from underlying RAW data and discard the previews generated in-camera.

They’ve been lightly processed in Lightroom, mostly bumping up the contrast a little, some white balance tweaks, and, with some, adding a little extra vibrancy. I’ve not added any extra noise reduction but have left the default Lightroom setting of 25 on the color noise slider; zeroing that out does have some pretty ugly results. But obviously, there’s a lot of room to further tweak the noise reduction results, whether in Lightroom’s built-in functionality with applying the luminosity slider or the built-in features of a different RAW processor, or with a dedicated noise reduction app like DxO’s DeepPrime and Topaz Labs’ DeNoise AI.

Here are some side-by-side examples at ISO 6400 through ISO 12800. They were taken on a tripod so as to keep the scene consistent, although there’s obviously some movement in the clouds and water between shots. They were taken with the P setting with manual ISO settings using the mobile app to trigger.

You can click on each image to open a full-size version and use the link in each caption to download the original RAW (.arw) file.

Here’s another short series. These were taken hand-held, so the alignment isn’t perfect, but they’re useful to complement the shots above because they have more and different color tones.

You can click on each image for a full-resolution version and use the links in each caption to download the corresponding original RAW (.arw) version.

If you use the Auto ISO setting on the camera, you’ll get a maximum ISO of 6400. If you want to access the one options above that–8000, 10000, and 128000–you need to select them manually. While Sony’s marketing specs say that there’s a way to adjust the maximum ISO ceiling used in the Auto ISO feature, that’s not true with the current firmware (v. 2.00)–but you can adjust the minimum shutter speed.

For such a tiny camera, the RX0 has remarkably good image quality. While still a small sensor, it’s nevertheless considerably larger than the sensors in similarly-sized miniature cameras. And that extends to its high-ISO photos. While it has nothing like the low-light performance of its full-frame siblings like the a7r iii and a7 iii, of course, it creates quite usable images all the way up to ISO 12800.

Up through ISO 3200, the results are excellent and I’m more than happy using images even at ISO 3200 in everyday shooting. Once you get beyond that, the noise grain, dynamic range, and color rendition start noticeably deteriorating, but it never really drops of a cliff like it can with some other cameras, even at ISO 12800. And that, in itself, is impressive, because even with cameras with larger APS-C sized sensors, the results above ISO 3200 can become problematic very quickly.

Something that would make the RX0 an even better performer in low-light conditions would be a faster lens; it has a relatively slow f/4 fixed-aperture. Bringing that down to f/2.8 or even faster would be a welcome improvement. (Somewhat related, it would also be nice to have longer exposures than the current limit of 1/4 second.)

Overall, I’m impressed with the RX0’s high-ISO performance without being blown away by it. The results are quite good, especially for a camera this tiny.

I’ve posted a detailed hands-on review of the Sony RX0 here, as well as a larger collection of sample images at other ISOs.