Here’s a rundown of how to use Disk Drill to scan and recover photos and videos that have been accidentally deleted from your memory card. 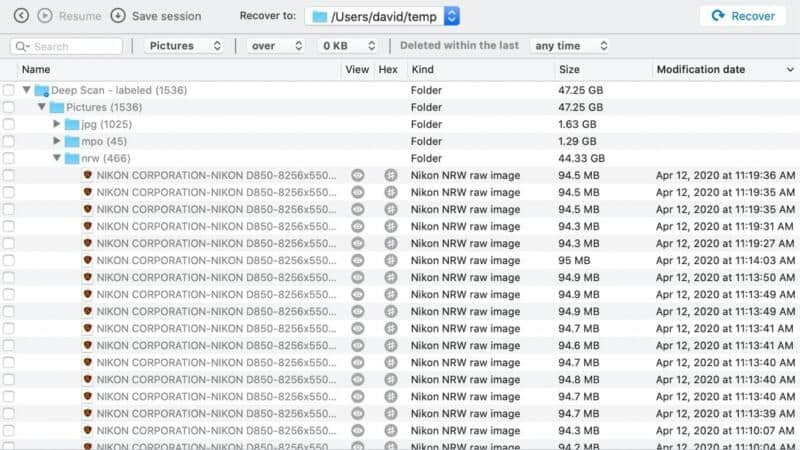 If you shoot enough photos, it’s going to be more a question of when, not if, you find that your photos are missing from your memory card. Maybe it’s from faulty hardware, perhaps the camera or the memory card. Or perhaps it’s from user error of accidentally formatting the card before you’ve fully downloaded all the photos to your computer. It’s happened to me and every photographer I know at some point.

For whatever reason it happens, there are ways you can try to recover your photos and videos from your memory card, whether it’s an SD card, microSD card, CompactFlash, CFexpress, XQD, CFast, or another kind of memory card.

I’ve covered several options for how to recover deleted photos from an SD card before.

I’m focusing on recovering deleted photos from a memory card, like an SD card or microSD card. It’s basically the same process if you need to recover them from your hard drive, whether that’s an internal hard drive or external hard drive, but it will often take longer there simply because they often (but not always) have more storage space and have far more files on them.

For this demo, I’m starting with a 256GB SD card that I’ve formatted in the camera (in this case, a Nikon D850). So it’s the process you’re likely to do if you’ve accidentally deleted the photos using the camera’s formatting option, something I’ve done prematurely by accident more than once before.

When trying to view the card in the camera, it shows that the card is completely empty. Ditto if I insert it into a card reader connected to my computer. So that’s our starting point. But as you’ll see, that’s not the last word and what’s recoverable, and it’s not yet time to give up hope of recovering your photos. And I’m just covering the basics here–there are a bunch more ways you can tweak the scan and recovery operation to your specific situation and needs.

Disk Drill is set to work as is right out of the box, but there are a number of preferences you can apply. These are some suggestions, and they’re entirely options—they’re not required to run the scanning process. These include S.M.A.R.T. Monitoring, which watches your drives for potential hardware failures.

But the most directly relevant to what we’re trying to do here are the preferences related to file types.

Disk Drill can find most types of files on a hard drive, not just photos and videos. But if you’re trying to recover photos and videos, it can be useful to reduce the clutter in the scan results by specifying the categories of files you’re looking for.

You can do this in the Settings/Preferences under the File Types tab. There you have sections for Pictures, Videos, Audio, Documents, and Archives. Each of those is a category, and if you click in the small arrows next to each, you can find specific file extensions. 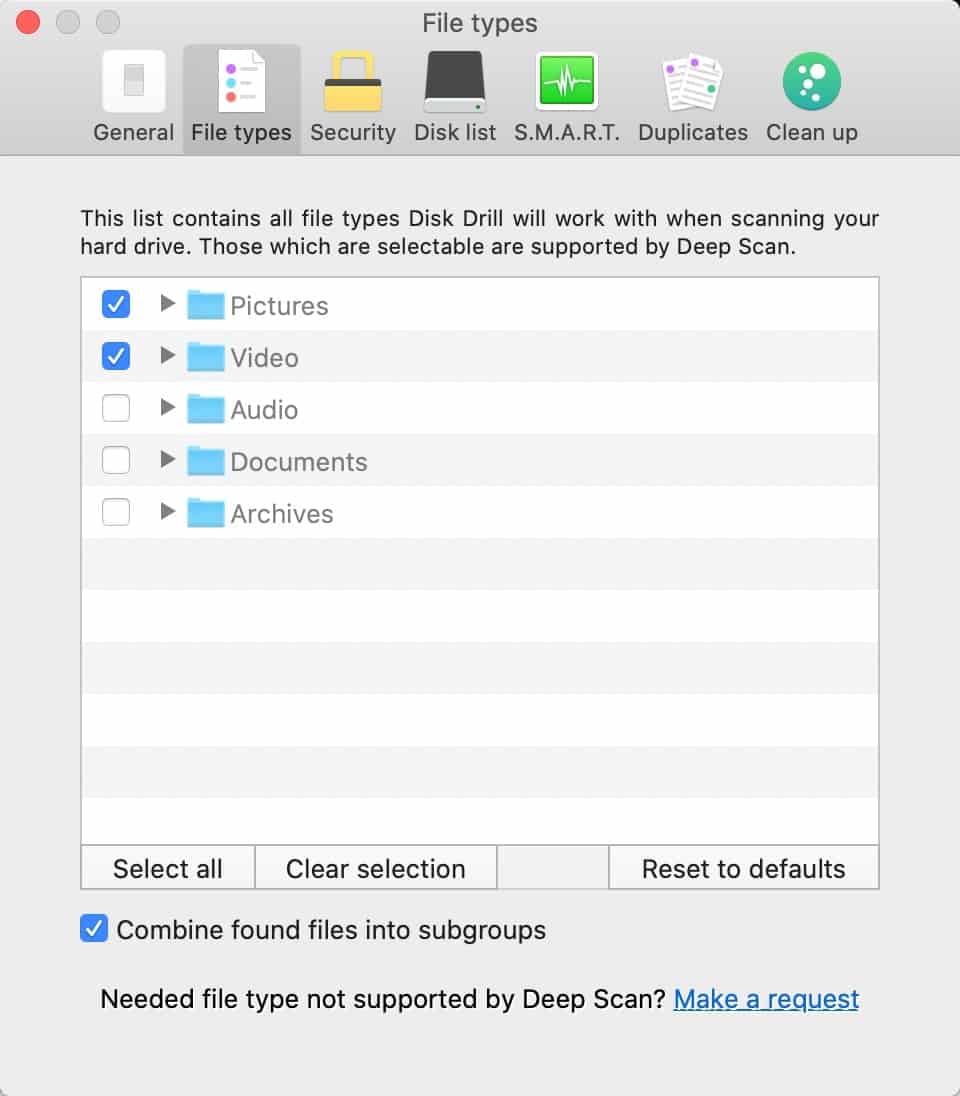 If you want to drill down further and be more specific about file extensions and types, you can. 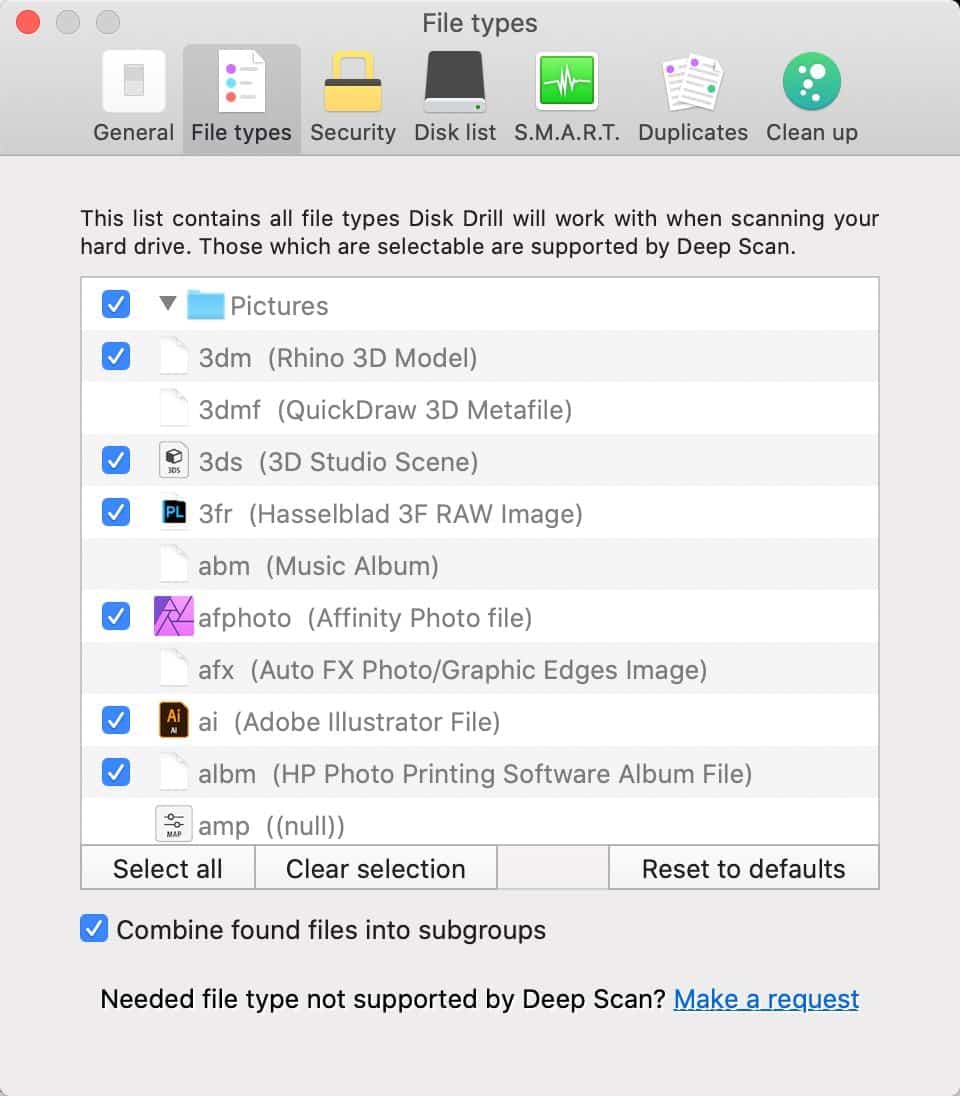 The next step is to move onto the actual scanning and recovery. First, though, you need to identify the disk you want to scan. You’ll see two sections in the main window. At the top is a list of hardware disks that the app can see (you will probably also have some hidden; you can reveal them with a link at the bottom left of the window).

But a simpler option is often to scroll down to the section under “Logical volumes.” These usually have more user-friendly names and factor in any partitions on the drives (there’s another RAIDs section below that as well).

Find the drive you want to scan, and then click on the Recover button on the right.

In the main scanning window, you have another opportunity to narrow down the types of files you’re looking for. You can select the type (e.g., Pictures), by file size, files that have been deleted within a specific timeframe, or even running a search (not as useful as it sounds for searching by filenames because the filenames you’re expecting might not be retained).

You have a choice of a quick scan or a deep scan. In this example, I’m just going to cut to the chase with a more thorough deep scan.

You can find the progress indicator at the top of the window. 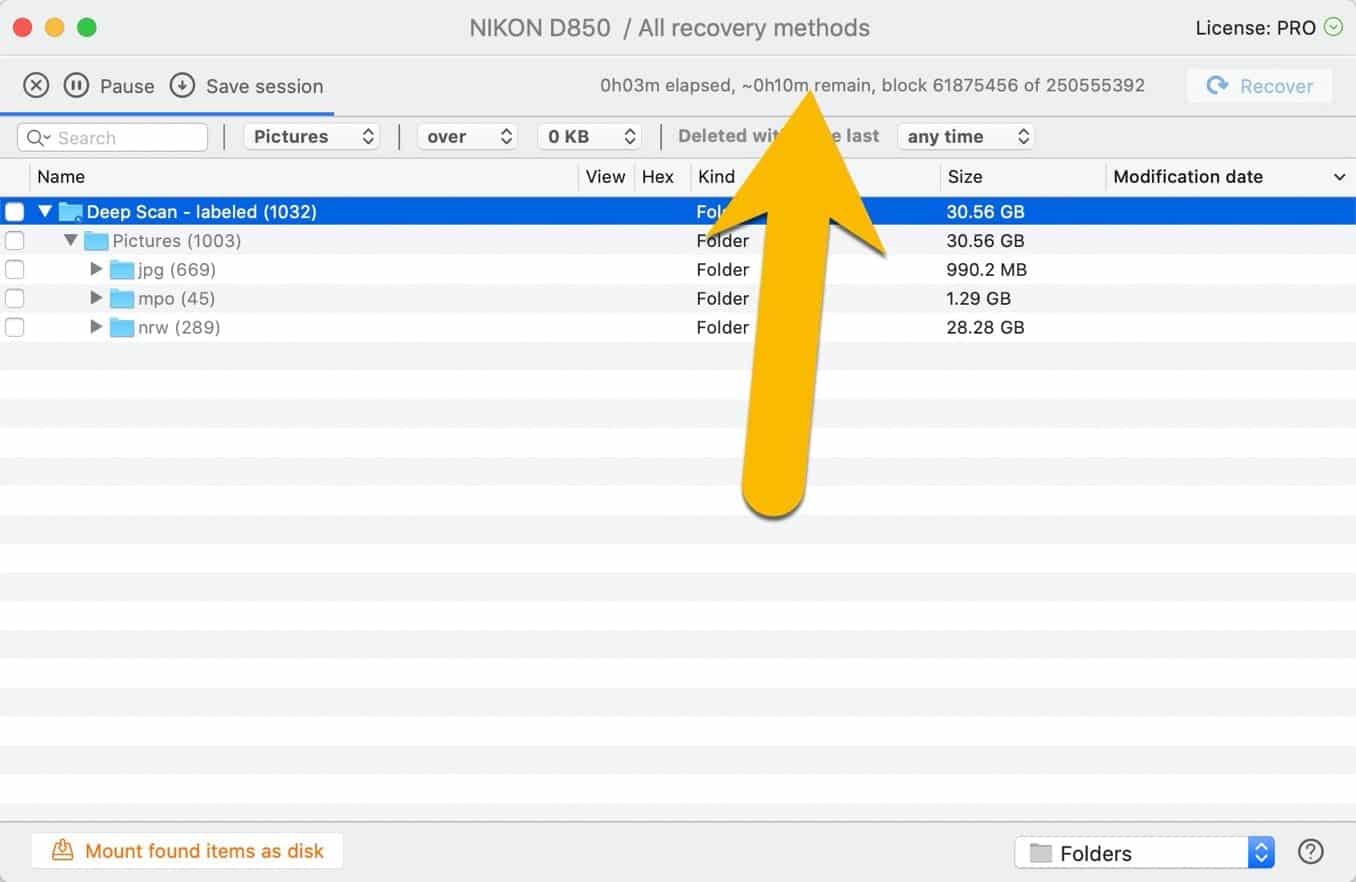 It will show up with the files it can find as it finds them. 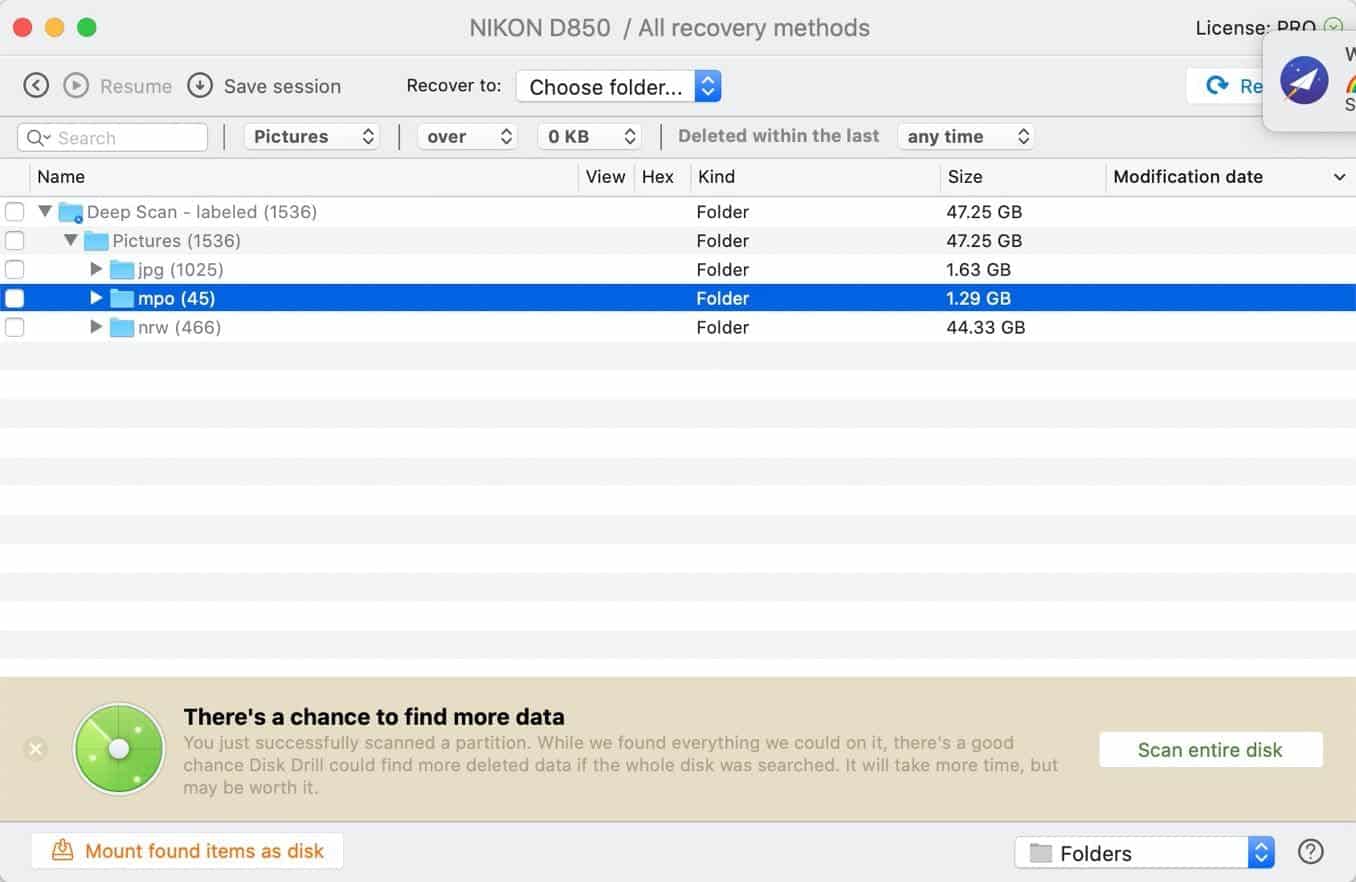 They’re organized into folders by types, but you can dig down into each to find specific folders you want. 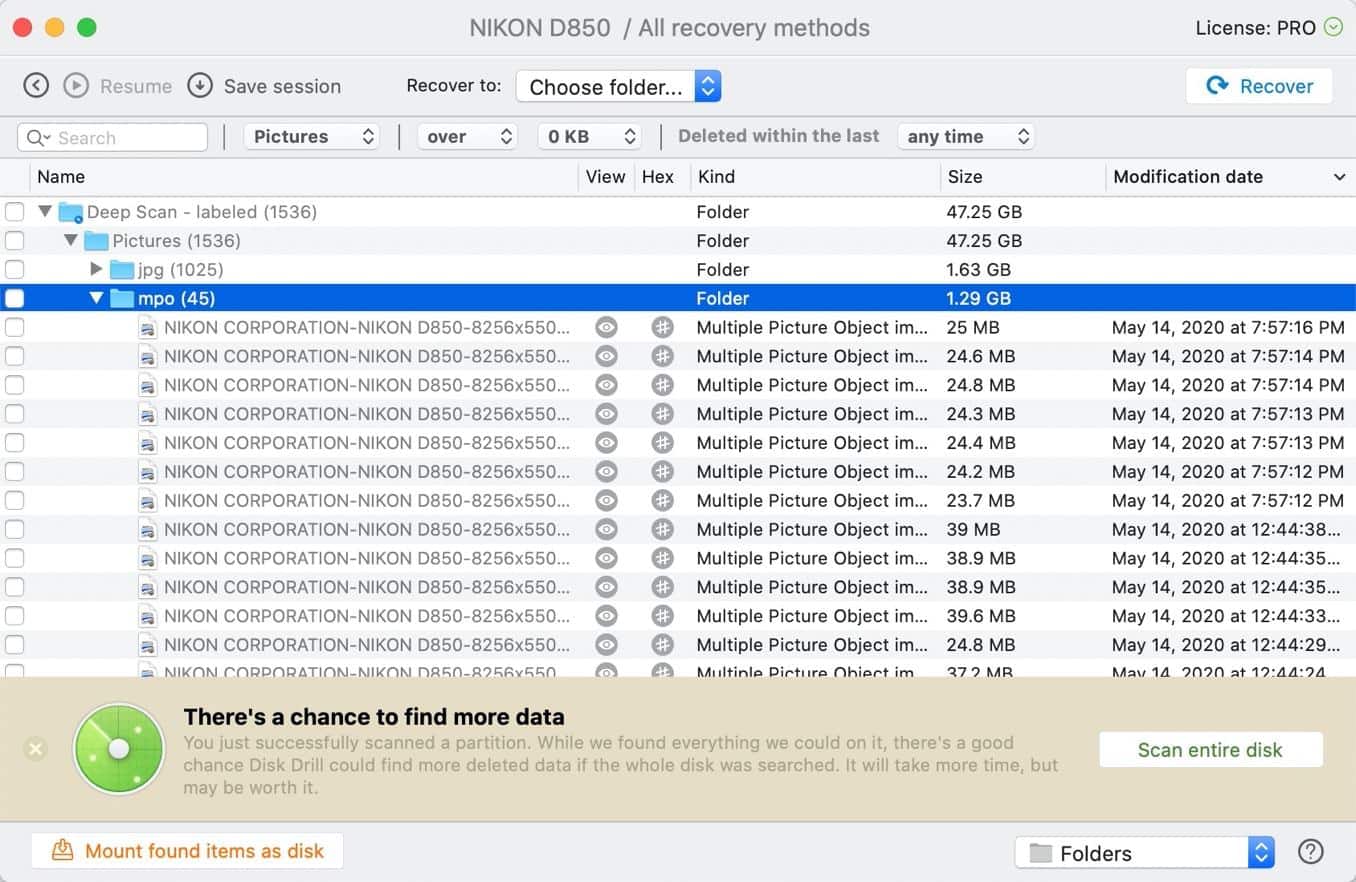 If you’re looking for JPGs, it’s straightforward. Just drill down into the JPG folder. But if you’re looking for RAW files or video files, it might not be so self-evident. That’s because the filetype identification might not match the file extension you’re expecting. Here, for example, I’m looking for Nikon .nef files. At first, it looks like it hasn’t found any, but has instead found a bunch of “mpo” and “nrw” files. But if you look closer, you’ll see that the “nrw” files are, in fact, the NEF files I’m after. In the “Kind” column, they’re described as “Nikon NRW raw image,” and the file size matches what I expect. (NRW is one of the RAW image formats used by Nikon.) 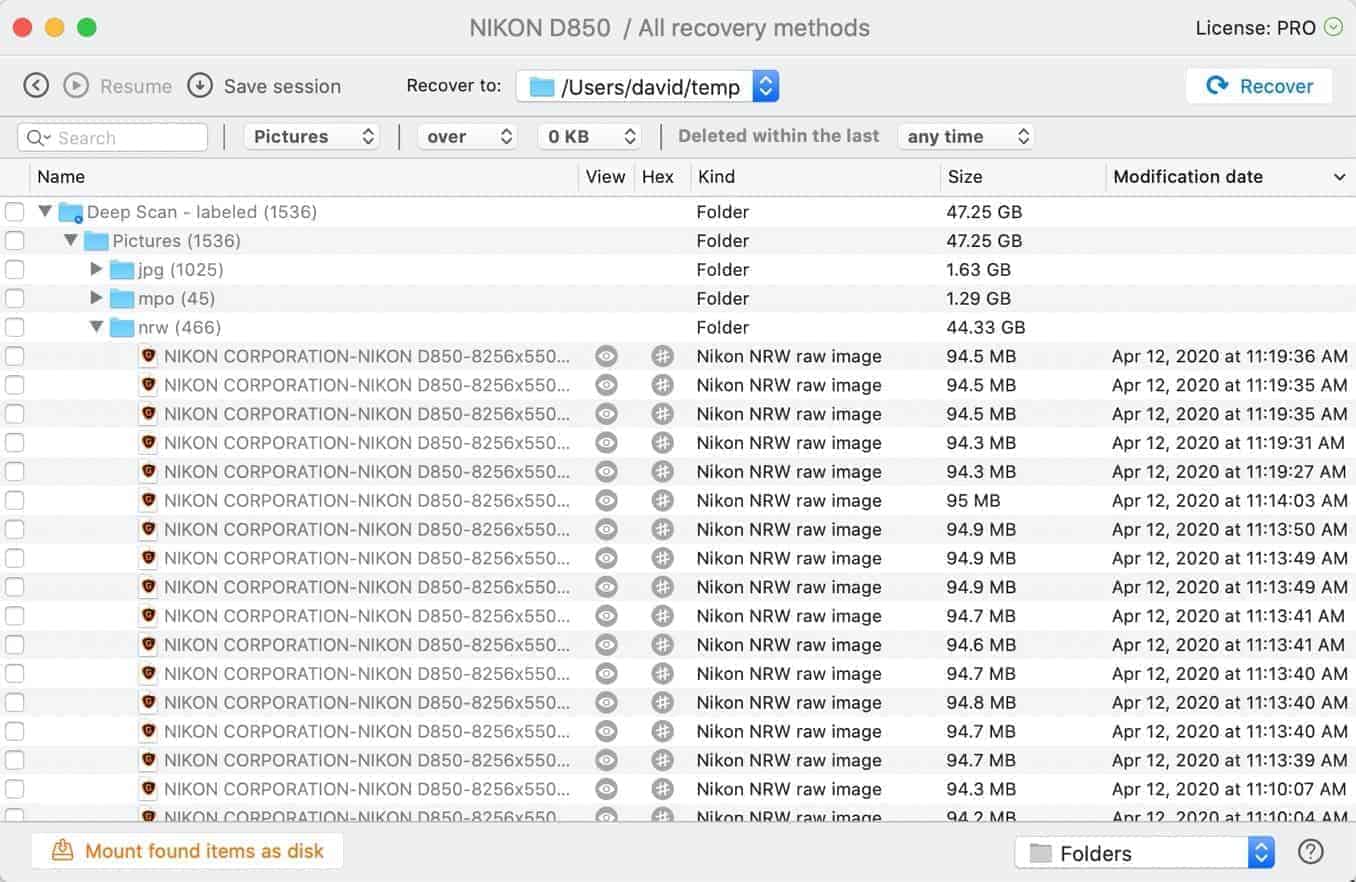 You can highlight each individual line and press the space bar to preview the image. 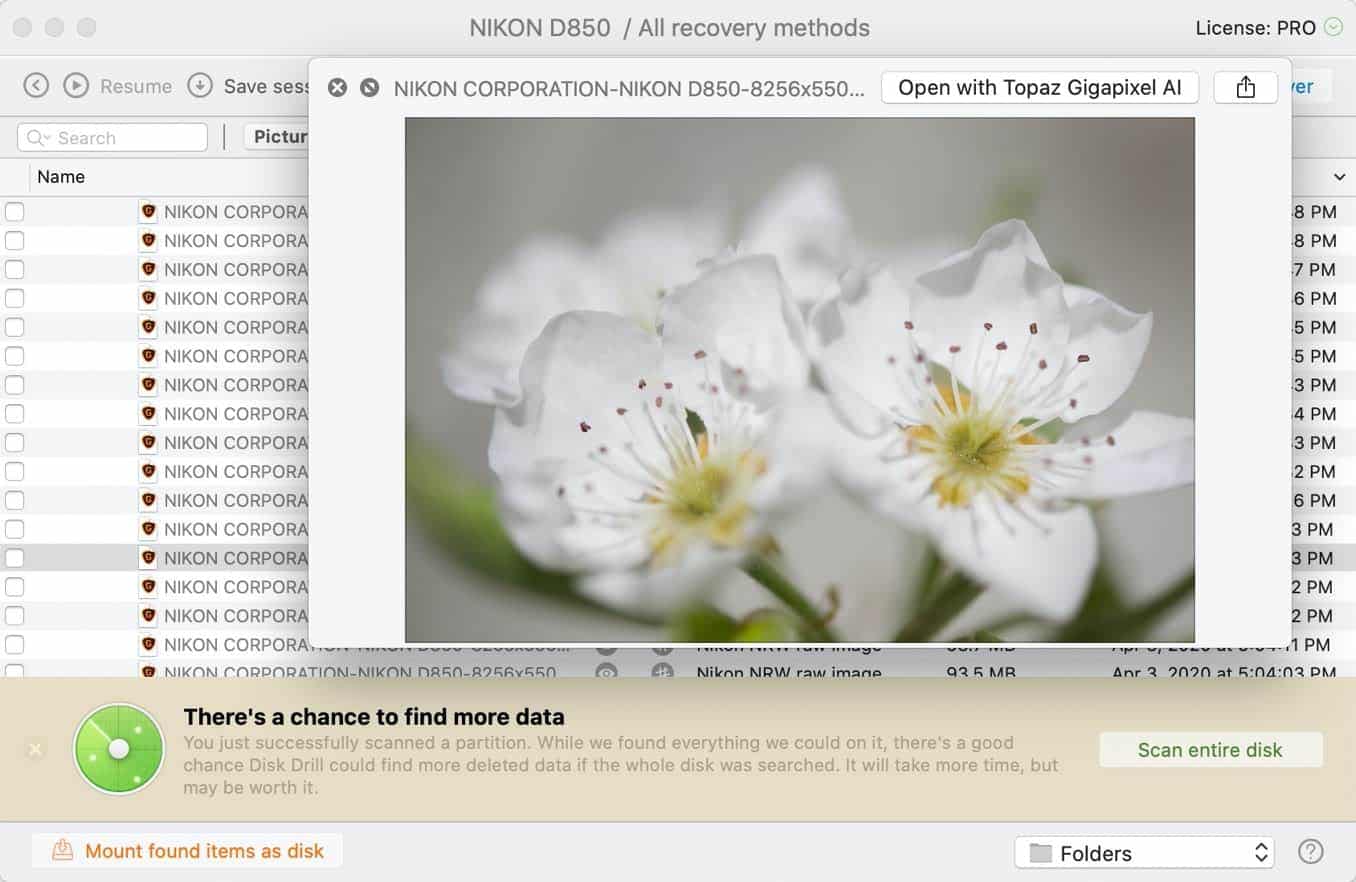 Once the scan is completed and you’re located the images you’re after, it’s time to move onto the recovery process. To perform the actual recovery, you’ll need a licensed version of the app. (See below for a 10% off coupon code.)

First, you’ll need to choose where you want the recovered files to be saved. Do that with the box in the middle at the top. 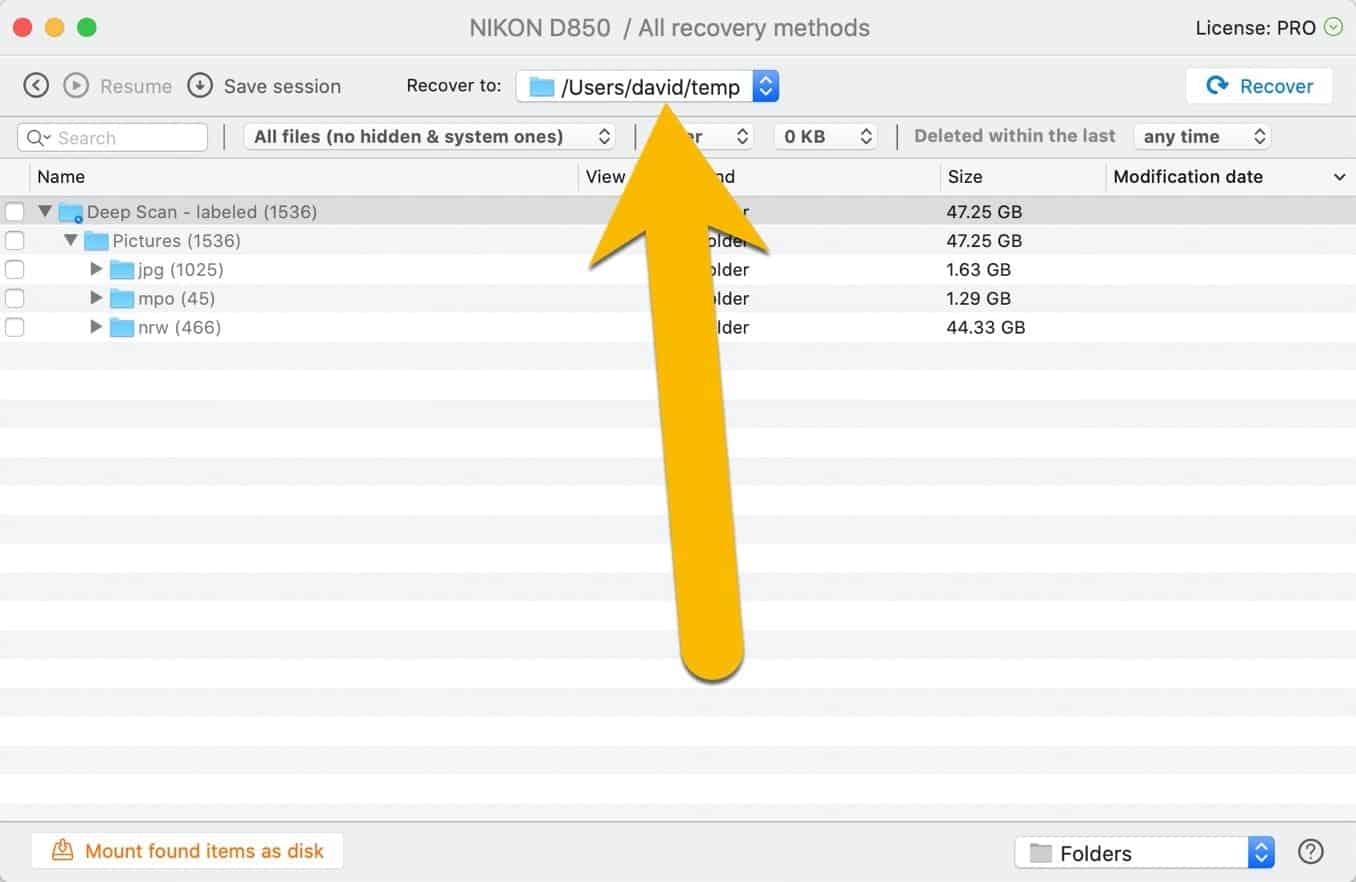 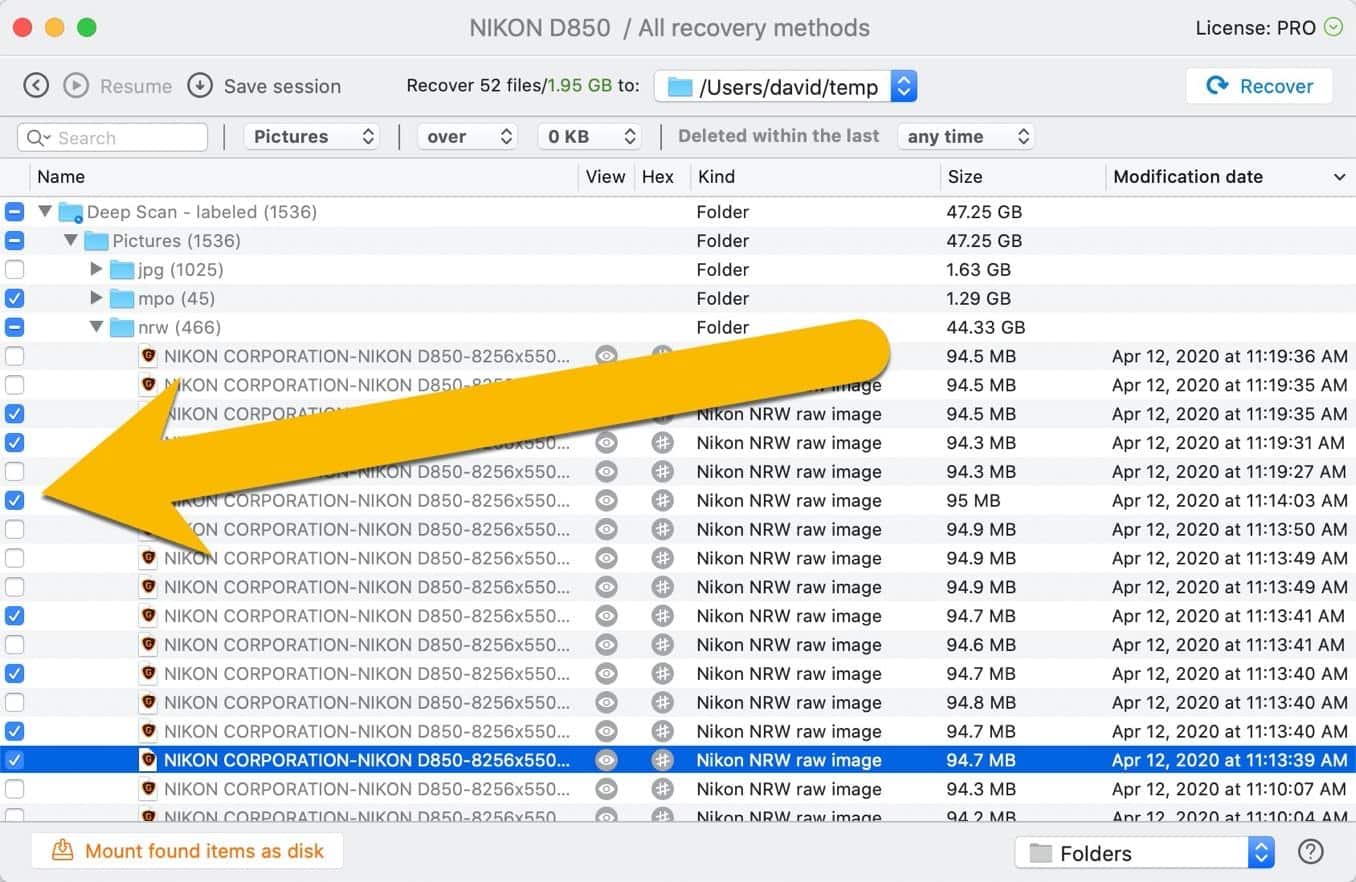 Once you’ve selected the ones you want, hit the Recover button at top right. 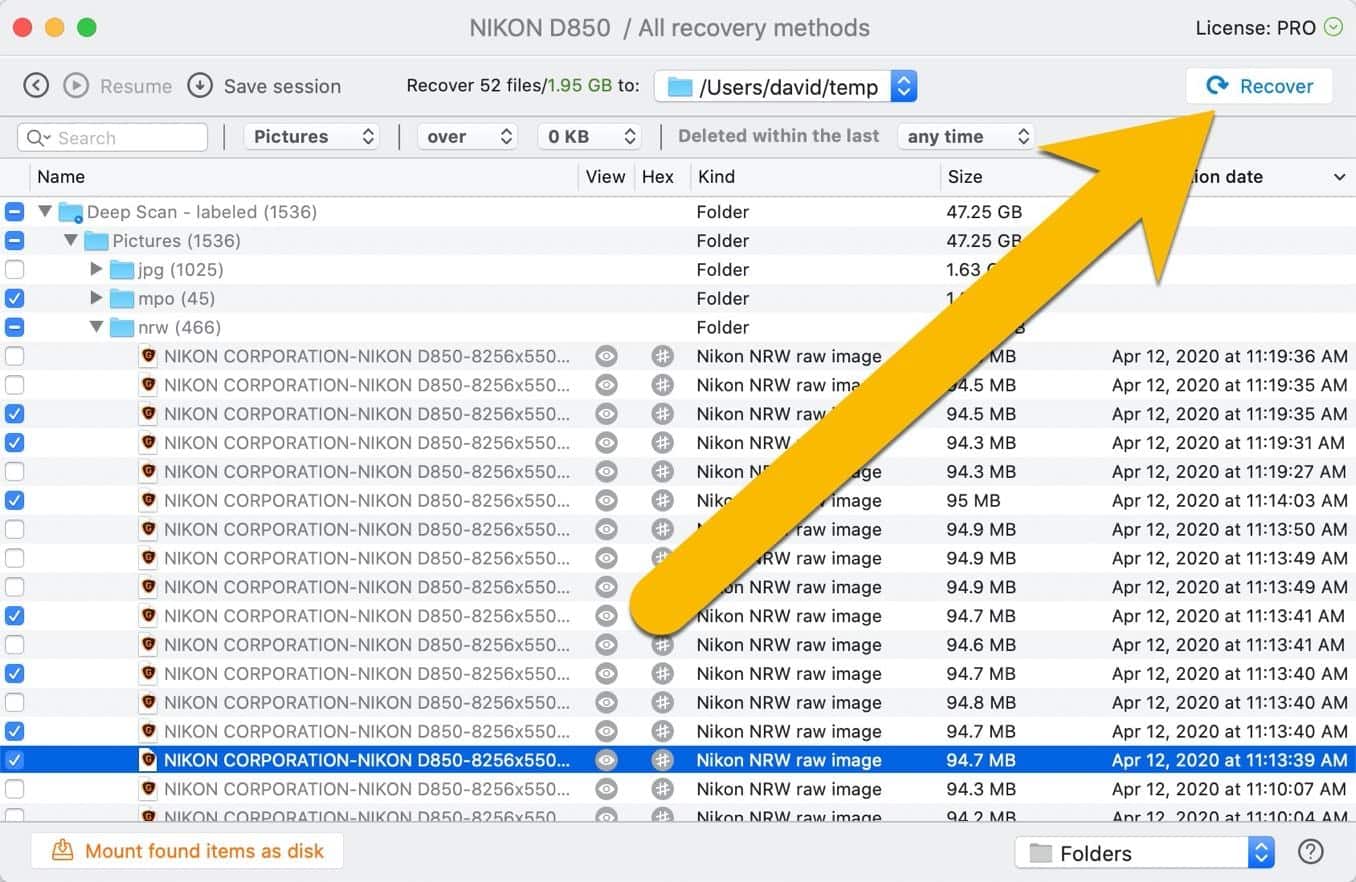 You’ll then get a progress screen that will tell you whether the recovery of each individual file was a success or resulted in an error. 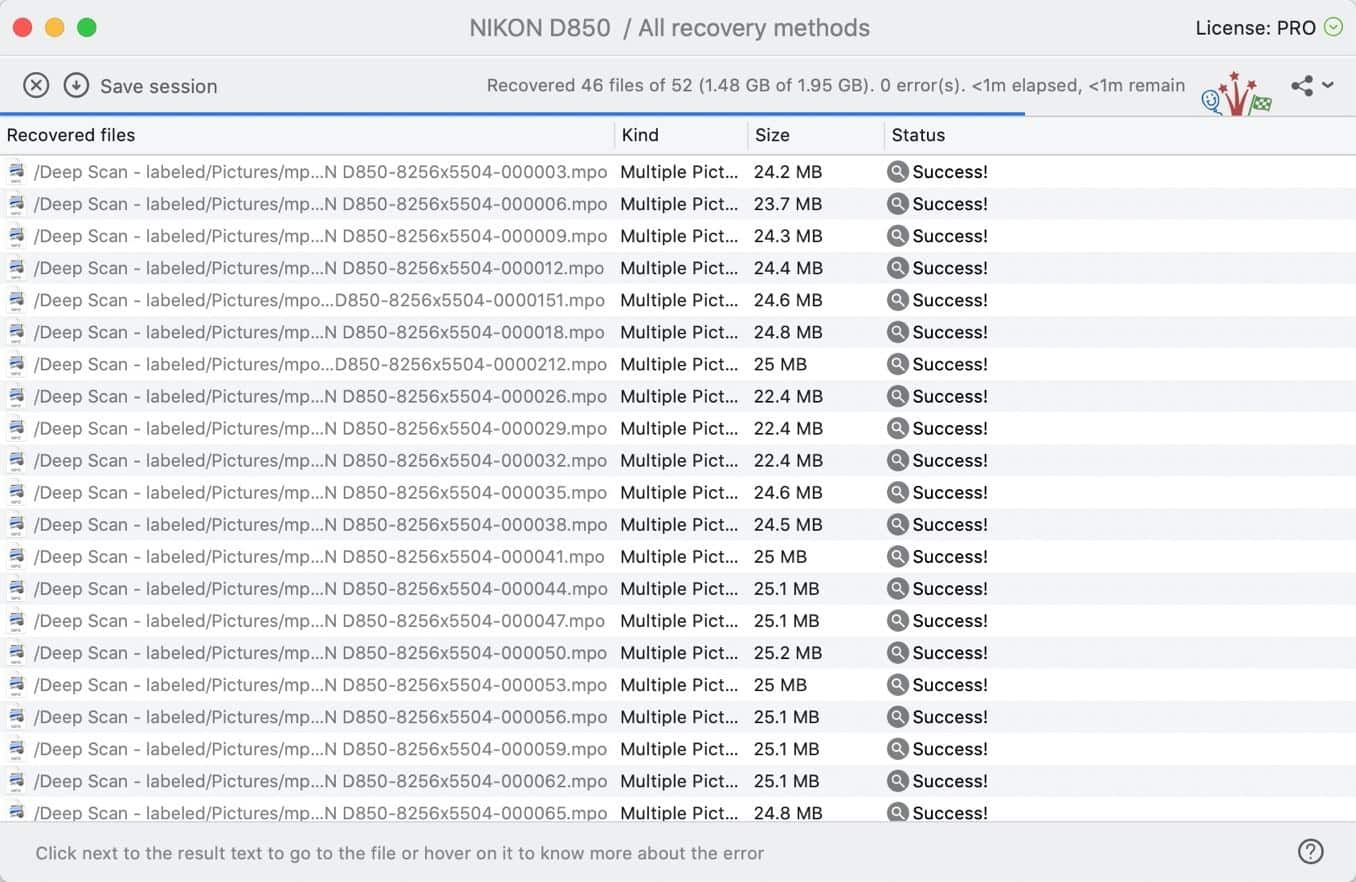 Once that’s done, the files are back on your hard drive (or wherever you chose to save them) and can be used as normal files. In some cases, you might need to rename the files.

While I’m focusing here on photo and video files on a memory card, Disk Drill will happily work with just about any filetype on just about any type of local storage device.

In this case, the NEF files were recovered as NRW files, but on my Mac, those are treated as if they were NEF and work normally (both extensions are used by Nikon for RAW files).

In some cases, it might be possible to recover most of an image file, but it might have white bands (or multicolored bands) across it. This is usually the result of a partial corruption of the file and often results if you’ve been reusing the memory card so that data is getting written over it. For those cases, there’s not much you can do, unfortunately—the data is only partial and corrupted.

There are two ways to get Disk Drill:

There’s a free trial version that will run the scan and show you what it can find—i.e., a preview of what’s possible to recover. If you’d like to go ahead with the actual recovery, you can upgrade to the Pro version.

If you decide to buy a license to run the recovery operation, you can get 10% off with the code HAVECAMERA at checkout. There are versions for Mac and Windows.

Get Disk Drill as Part of Setapp

If you’re using a Mac, an alternative way to get Disk Drill is as part of the Setapp subscription, where you get a large number of really great Mac apps for a monthly subscription fee. I’m a paying subscriber to Setapp myself and find it to be a simpler and cheaper way to get many of the apps I was already using but was paying and upgrading individual licenses.