How to Update GoPro HERO6

Running the latest firmware on your GoPro HERO6 is important for compatibility, stability, and performance. Here’s how to check and update the firmware of the HERO6 Black. 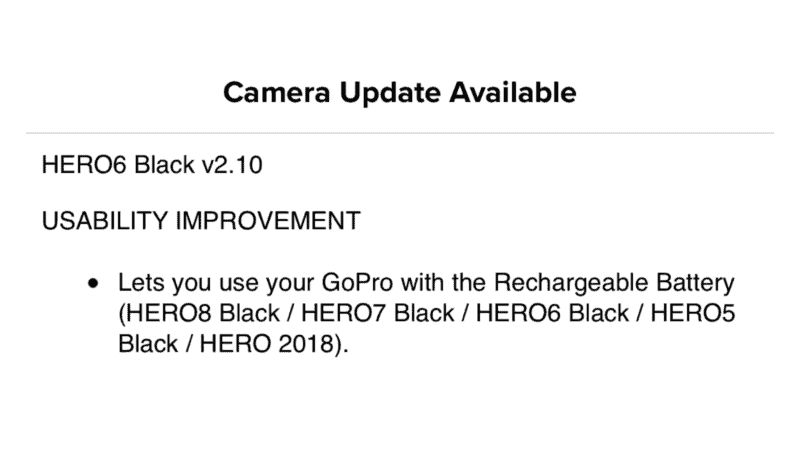 Firmware updates improve the performance of your camera. They can add features, improve stability, improve compatibility with accessories, and fix bugs. So it’s always a good idea to keep your HERO6’s firmware up-to-date.

There are three methods you can choose from to update your GoPro HERO6:

There’s no particular benefit to doing it one way rather than another–it’s mostly a matter of convenience. And in terms of convenience, the first method, using the GoPro Quik app is probably the most convenient–it’s the method I use most often.

However, if you need to roll back to a previous version of the firmware–which is rare, but it happens–then you’ll need to use the manual firmware update process.

With all of them, make sure that your HERO6’s battery is charged. This is to avoid interruptions to the update process, which can cause problems.

1. How to Use GoPro Quik Mobile App to Update GoPro HERO6 Black

Connect the GoPro Quik mobile app to your HERO6 Black. (If you haven’t done that before, here’s a guide.)

Once the wireless connection is established and the camera and phone paired, the GoPro Quik app will automatically check the firmware version. If a newer version is available, it will prompt you. You can choose to proceed with the update or skip it.

2. How to Manually Update the Firmware of Your GoPro HERO6 Black

With this method, before you can download the firmware file, you’ll need to have your camera’s serial number, and you’ll also need to register the camera with GoPro.

Go to the HERO6 page on GoPro’s website and scroll down to the “Update your camera manually” link.

Once you’ve done that, you’ll be able to download the update file. The site will prompt you for the next steps, and there’ll be some variation depending on which computer operating system you’re using, but the basics are that you copy the file to your microSD card, insert the card, and update the firmware.

3. How to Use the GoPro Quik Desktop App to Update GoPro HERO6 Black

This works the same way as the mobile app method, with the exception of the connection method. Instead of using a wireless connection, you connect the camera to your computer with a USB cable.

The Quik desktop app is now discontinued, but you can still download it here. It’s free.

With the camera connected (and powered on), when you fire up the Quik app it will prompt you to update the firmware if there’s an update available.

What is the current firmware for the GoPro HERO6 Black?

The most recent version is probably still v.02.10, which was released on October 17, 2019. It added compatibility with the new version of the battery released with the HERO8. It’s unlikely that there’ll be more firmware updates for the HERo6 after that one.

How often should you update the HERO6’s firmware?

GoPro’s firmware updates are often quite important–they have a tendency to fix problems after the camera has been released rather than exhaustively test before release. They also release new accessories–such as batteries–that can be backwardly compatible with earlier cameras if those cameras’ firmware is updated. That was true with the HERO6, for example. Firmware version 2.10 updated the HERO6 to work with a new, tweaked battery that was released with the HERO8.

Yes, you need both a battery (charged) and an SD card (formatted) in your HERO6 in order to update the firmware. It won’t let you proceed with the update without them.

How do I check what version of the firmware is on my HERO6 and whether it’s up to date?

You can also find this information by using the GoPro Quik app. Once you’ve connected wirelessly to your HERO6, go to Settings (the gear icon), and then scroll down to the Camera Info section. The Version field is the current firmware running on the camera.

Armed with that information, you can check the latest firmware released for the HERO6 Black on the GoPro website.

How to Update GoPro HERO6