Here are some recommendations for which SD cards to get for the GoPro Fusion 360° camera. And you'll need two of them. The GoPro Fusion is GoPro’s first dedicated 360° camera. While GoPro has waded into 360° waters before, this is the first time they’ve built the capability into a single camera (their previous efforts involved multi-camera rigs that end up being far more expensive before you got up and shooting).

It does it with an approach similar to how the Ricoh Theta S does it, with two sets of sensors and ultra-wide lenses facing in opposite directions. But where the Theta S doesn’t take memory cards–it’s all handled with internal memory–the Fusion has two microSD slots. The data captured by each sensor is written to its own card. Slot 1 is designated as the back camera, while slot 2 is the front. The footage (or photos) from each sensor is then stitched together later in the Fusion app.

When it comes to choosing a memory card, even though the Fusion is a 360° camera, the considerations are mostly similar to the more conventional HERO6 Black. Like other high-end GoPro models, the Fusion records high-bitrate video that requires SD cards that are fast enough to keep up. Both record video streams with a maximum bitrate of 60 Mbps. So you can’t just throw any old microSD card in it and expect it to work. If you use cards that aren’t fast enough to keep up with that, you run the risk of the recording stopping unexpectedly or the camera locking up.

But there’s also one big extra consideration with the Fusion: you’ll need two SD cards. Most other GoPros use only a single SD card, but the Fusion records to two simultaneously–one for each lens/sensor.

There are several cards that work well in the Fusion, but it helps to know what to look for. I’ve been testing the real-world speeds of microSD cards for a while now, and I’ve recently been shooting with a Fusion and getting a sense of what works and what doesn’t. So combining my hands-on experience with GoPro’s official recommendations1, I’ve put together this guide in the hope it helps others find the right card to go in their GoPro Fusion without the frustrations that come with trying to use cards that aren’t fast enough.

The recommendations below aren’t designed to catalog every card that will work in the Fusion. My focus here is on cards that offer a good combination of being fast enough to work well in the Fusion, coming from reliable and reputable manufacturers, being readily available at major retailers, and being cost-effective. I also have a more general guide to the best SD card for GoPro cameras.

Quick Recommendations on SD Cards for the GoPro Fusion

If you want the short version, here are some quick recommendations. These are fast and reliable, cost-effective, and readily available. Any of these make for a good choice. If you’d like more detailed recommendations or other brands and models, you can find them below. And don’t forget that you’ll need two cards!

SD and microSD cards have several different codes printing on them and the packaging. Here’s what they mean and what to look for when choosing cards for the Fusion.

SDXC or SDHC? Either will work. The Fusion can work with cards that have either the SDXC or SDHC spec, so you can safely choose either. Technically, the difference is that the SD Association has assigned the SDHC spec for cards that use the FAT32 filesystem, while the SDXC spec applies to cards that use the exFAT filesystem. There’s really no performance difference when you use them in a GoPro, but there is a practical difference when it comes to choosing an SD card for your Fusion: all of the cards 32GB and smaller will be labeled as SDHC, while cards 64GB and larger will be labeled as SDXC.

Recommendation: either SDXC or SDHC will work fine.

V60, V30, U3, U1, or Class 10? These ratings refer to the card’s designated speed category for recording video data.

Recommendation: V60, V30, or U3. There are U1 cards that are fast enough, but it’s less of a sure thing. Class 10 cards are not reliably fast enough for the Fusion.2

What size? With the high-bitrate recording, the cards fill up quickly. GoPro doesn’t recommend using smaller than 32GB. The sweet spot of convenience and cost-effectiveness is probably around the 64GB to 128GB sizes. If you want to use larger, such as 256GB, you can.

Recommendation: Use 32GB or larger. I generally use cards in the 64GB to 128GB range.

UHS-I or UHS-II? Either will work. This designation refers to the bus type of the card. While UHS-II is potentially faster, there are many factors that come into play. Most importantly, you need a device that itself has a UHS-II bus interface. If you put a UHS-II card in a device with a UHS-I interface (like the GoPro Fusion), it will fall back to the UHS-I performance.

Recommendation You can pretty much ignore this as a decision-making factor. The Fusion can’t take advantage of UHS-II, so you won’t get any advantage in the camera from a UHS-II over a UHS-I card. If a UHS-II card happens to meet all your other criteria, then by all means go with that.

How many? Two. It won’t work with just one memory card installed. If you only insert one, you’ll get an error message on the small front screen prompting you to insert the second one. Like this: Do the memory cards need to be identical? No. So long as the cards both meet the camera’s requirements, you can mix and match brands, speeds, and sizes. It can be simpler to use a pair of the same card, but it’s not required.

Video Bitrates in the GoPro Fusion

The GoPro Fusion has two video modes, each of which can be used with Protune turned on or off. Turning on Protune increases the bitrate of the recording. It uses a variable bitrate codec with target average bitrates of either 60 Mbps or 45 Mbps, depending on the video mode.

It’s also worth mentioning that when you look on GoPro’s website, it lists the max video bitrate of the Fusion at 120 Mbps. That’s true, but they’re arriving at that number by combining the bitrates being recorded by each of the two lens/sensor combinations. So yes, the stitched video can potentially be up to 120 Mbps. But the video streams are recorded to the memory cards pre-stitching, and in terms of what’s being written to the memory cards, which is what I’m focusing on here, the maximum bitrate being written to each card is 60 Mbps.

The biggest demand that the Fusion makes of the SD card is that it be fast enough. But it has to be a specific type of fast. That is, memory card manufacturers often put a speed rating on the card that sounds impressive but is referring to the read speed, or the speed at which data can be downloaded from the card. That’s not the most relevant measure for using in a GoPro.

What you need is a card with a fast write speed, and more specifically a fast sequential write speed. You don’t necessarily need the fastest card with bleeding-edge technology–they can sometimes also be ridiculously expensive. But you will need one that’s fast enough to keep up with the recording of the Fusion’s high-resolution video.

If the card is too slow, the recording can stop, you can get an error message, you can lose footage, or the camera can lock up (and perhaps all of the above). Some memory cards can also provoke write error messages and cause excessive battery drain, although those issues tend to be less common.

Here’s a longer and more detailed list of cards that are fast enough for the Fusion, are from well-known manufacturers, are readily available at major retailers, and tend to be cost-effective.

SanDisk's Extreme cards are a safe bet for using in GoPros of all stripes. It's the card that GoPro itself often bundles with some of their cameras, and it's one of the ones they've officially recommend in their Works with GoPro program.

The current versions of these cards are easily fast enough for the Fusion. From my speed tests, it has plenty of headroom for the 60 Mbps video recording of the Fusion. It comes in 32GB, 64GB, and 128GB.

As with most of its product names, SanDisk recycles them with newer, faster cards. So you can find "Extreme" cards that are actually several years old. It's therefore worth checking the model number, although in practice even some of the older versions of the Extreme cards will also work well in GoPros. The newest version of this card has a model number that starts with SDSQXA1.

SanDisk uses a three-part model numbering system in the format SDSQXA1-256G-GN6MA. In this example, SDSQXA1 is the model general, 256G refers to the amount of memory, and the last 5 characters are used by the marketing department for different parts of the world but the cards are otherwise the same. So the first part is the crucial part if you're looking to see which model the card is and you don't have to take much notice of the last 5 characters.

Samsung makes several excellent microSD cards, but making sense of their model naming system and how they're different from each other isn't easy. The EVO Select cards are a relatively small step up from Samsung's standard EVO card, these EVO Select cards are also quick, reliable, and offer good value. They come in sizes from 32GB up through 256GB.

As you can guess from the name, the Extreme Pro line is SanDisk's top-of-the-range offering. It's faster and fancier than the Fusion needs, and you won't see any extra performance benefit in the camera over the regular Extreme and Extreme Plus cards, but it works well. 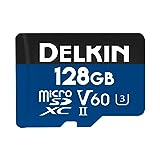 These cards by Delkin are among the first to carry the new V60 rating for recording 4K and 8K video. It's also a UHS-II card and comes with a UHS-II SD adapter cartridge (most other adapter cartridges are UHS-I). I use these a lot in my GoPros and have found them to be fast and reliable.

Lexar memory cards seem to have (so far) survived some upheaval at the corporate level, and you can still find these cards available.

Lexar has always to put more emphasis on marketing the read speeds of their cards--in this case, 1000x or up to 150MB/s--but several of their cards have write speeds fast enough for the Fusion's 60Mbps video. This is one of the newer ones and is rated for a write speed of up to 45MB/s. It comes in 32GB, 64GB, and 128GB versions.