A rundown of the various video modes, resolutions, framerates, fields of view, formats, bitrates, and stabilization options available on the GoPro HERO5 Black. 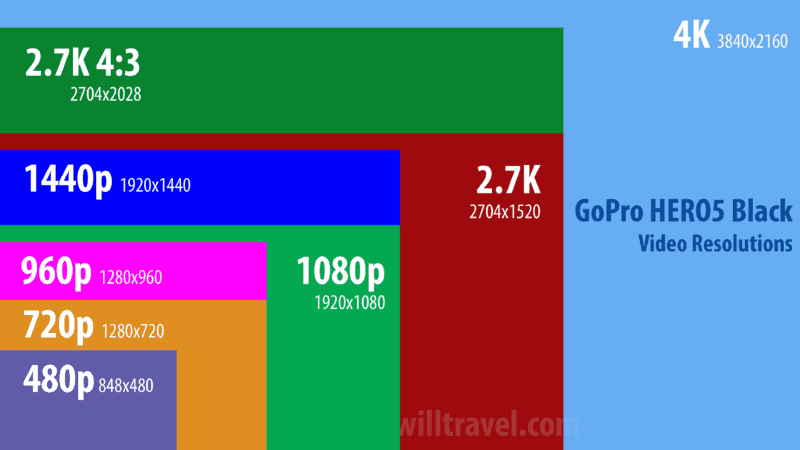 The GoPro HERO5 Black shares many of the same video modes with its predecessor, the HERO4 Black.

Two new additional features are available in many, but not all, video modes. They are the new Linear FOV mode, which corrects for fisheye distortion in-camera, and the built-in video stabilization that smooths out the footage in the camera.

Here’s a graphic showing the relative sizes and aspect ratios of the available video resolutions. Click on the image to open a full-size version at 1:1.

Note that in practice the zoom is done from the center of the frame.

The HERO5 Black outputs .mp4 files in 8-bits with a variable bitrate setting. They’re encoded with the widely compatible H.264 (AVC) video codec, so you can edit and share them just about anywhere and with nearly all video editing, playing, and sharing software and services.

Fields of View When Shooting Video with the HERO5 Black

The GoPro HERO5 has a fixed lens, but it’s capable of outputting video in five different fields of view, or FOV settings (FOV is also often known as lens perspective).

Not every FOV setting is available in every combination of resolution and framerate–see the table below for details. The different video FOV settings available are:

Unique to GoPro (and trademarked by them), SuperView is an even wider view than the standard wide view. It’s good for an exaggerated immersive look such as from chest harnesses or helmets, but it also adds even more distortion by stretching the content.

This is with the most commonly used settings. It provides a large field of view in wide-angle but also adds that distinctive fisheye look that GoPro footage has become known for.

(It’s possible to correct the fisheye distortion in post-production.)

This is a zoomed-in field of view, focusing on the center of the frame. Note that the “zooming” is a digital manipulation, not an optical change in the lens. That is, it’s really a type of cropping, although the output dimensions remain the same.

This is a new setting with the HERO5 line that corrects for the fisheye distortion in-camera rather than having to do it in post-production. It’s good if you want a more traditional perspective, for aerial drone footage, or you don’t want bendy lines that should be straight. It does reduce the field of view around the edges of the frame.

I have more detail on the linear FOV setting here, along with more examples.

This is the most-zoomed-in perspective. But again, it’s really a type of digital cropping, not optical zooming (although the output video dimensions remain the same).

It’s also worth noting that there are actually two versions of the Narrow FOV: the one used in the ultra-high-speed 720p240 setting is smaller than at the other resolutions and framerates.

Protune Settings on the HERO5 Black

Protune is GoPro’s name for its suite of expert controls that lets you override some of the automatic exposure settings.

Here’s a master list of all the video resolutions and framerates, along with the corresponding bitrates and whether or not stabilization is available with that setting.

The HERO5 Black can shoot in NTSC and PAL formats—you choose which in the main camera preferences, not in the video settings where you might expect it.

Some FPS settings are only available in the corresponding format. For instance, if you want to shoot at 50fps, perhaps to match some existing footage, then you’ll need to first put the camera into PAL format.