The Manfrotto 190go! M-Series Carbon Fiber Travel Tripod is a 4-section tripod that’s rated for a load capacity of about 15 pounds, stands up to 58 inches tall, and weights under 3 pounds. Here’s my hands-on review. 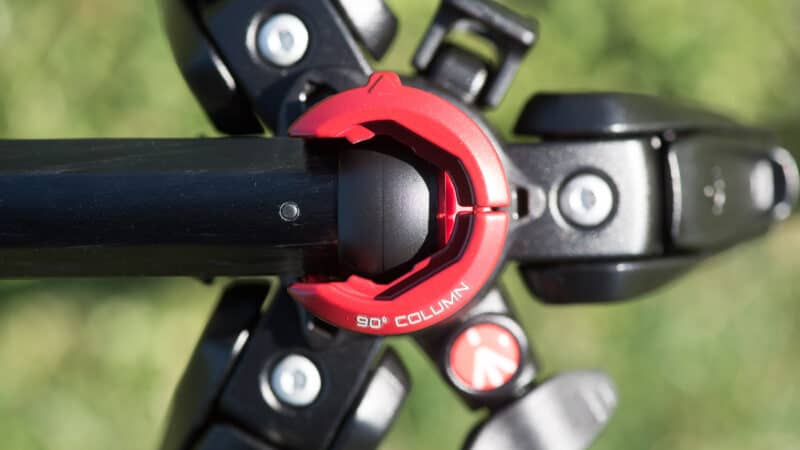 This review is another in my ongoing series of hands-on reviews of travel tripods. In this one, I’m looking at the Manfrotto 190Go! M-Series tripod.

There are two versions of it. The one I’m using here is the carbon fiber version. There’s also an aluminum version that has very similar specs but is a little heavier, a little less stiff, and quite a bit cheaper. The carbon version has a load capacity of 15.4 pounds (7 kg), a maximum height of nearly 58 inches (147 cm), folds down to under 18 inches (45 cm), and weighs under 3 pounds (1.4 kg).

Manfrotto, of course, has a long and distinguished history with photography gear. They’re an Italian brand (now owned by a British company)–with much of their gear made in Italy–that is famous for their tripods and accessories.

Manfrotto’s tripods tend to cater towards the middle of the price range to distinguish them from the higher-end gear of their sister brand Gitzo.

Many of the other travel tripods on the market fold back on themselves to minimize their packing size. After Gitzo introduced it several years ago, many other brands have since copied it, and it has become the new standard way for travel tripods to fold down to their minimum size. This one doesn’t do that. It folds up the old-fashioned way.

The leg extensions use standard twist locks. They might look a little more industrial than some of the others, but they function the same way. They’re a grippy rotating lock. These have a linear locking mechanism rather than the fancier mechanism that some other tripods use. I’ve found them to lock tight and be easy to use even with cold hands.

The angle locking mechanisms are distinctive. In broad outlines, they’re essentially a spring-loaded ratchet lock. But they’re a little more quirky than is standard. Normally, I prefer spring-loaded locks, but I’m not entirely sold on the way the method has been implemented here. On the plus side, they’re streamlined and flush to the legs. But I’ve found them a little awkward to release. They also have quite a lot of movement in the mechanism. It’s secure enough, but it just doesn’t feel that secure when you’re operating it.

This tripod’s party trick is that center column can be switched out to a parallel bar to make it easy to shoot straight down. It’s not the only tripod that can do this–the Benro GoTravel does this too, for instance–but I’m impressed with the mechanism of this one. It feels solid (more solid than the Benro, for example) and is easy to use.

The version I’ve been using comes as legs only, but you can also pick up kit versions sold with a ballhead or a 3-way head.

With the legs, you can attach pretty much any head you like. One notable thing about this one is that it has an unusually broad baseplate. While you probably wouldn’t want to add a big (and therefore heavy) head to these relatively lightweight legs, the option is nevertheless there if you want it.

It comes with angled rubber feet. They have surfaces that lie flat to the ground, so they’re a little more grippy than the more standard conical feet.

The feet are not removable.

There is one small thing that’s sacrificed to accommodate the mechanism that swings out, and that’s a hook on the bottom of the center column to attach weights or ballast. There isn’t one on this tripod. Instead, there’s a release button that you use when you want to swing the center column out.

On the side is what they call an Easy Link. It’s basically just a threaded attachment point, but it can come in handy as a kind of utility attachment.

Specs of the Manfrotto 190Go! M-Series

Not much. This is a bare-bones tripod. It doesn’t include a bag or any accessories.

Aside from not being particularly sold on the leg angle locking mechanism, I haven’t found much to complain about with this tripod. After shooting with it for a while, I’ve found it to be a good, reliable tripod.

But, for the most part, there’s also not a lot that stands out. Part of the problem is that it’s probably a little overpriced for what you get. With some solid competition from Chinese companies like Sirui and Oben, the travel tripod market has become quite crowded and very competitive. And it’s just a type of product where it’s hard to stand out from the crowd.

One thing the Manfrotto 190Go! has going for it is the 90° center column to be able to shoot straight down. I like the way the swivel mechanism on this one works better than how Benro does it. And it’s something that would appeal especially to macro and product photographers who need that straight-down shot.

Overall, I’ve found the 190Go! M-Series to be the typical good quality that Manfrotto produces with just a hint of quirkiness in things like the swivel center column and the leg angle locks. While it’s not remarkably strong or stiff–there’s some give when the legs are extended–but it’s well within the normal range for this type of lightweight, portable tripod.

If there’s an area where it’s let down, it’s that it doesn’t include some of the things its less-expensive competitors throw in as standard, such as removable feet and not including things like a tripod bag or steel spike feet.

Price & Availability of the Manfrotto 190Go!

You can find the Manfrotto 190Go! Carbon Fiber M-Series Tripod at B&H Photo.