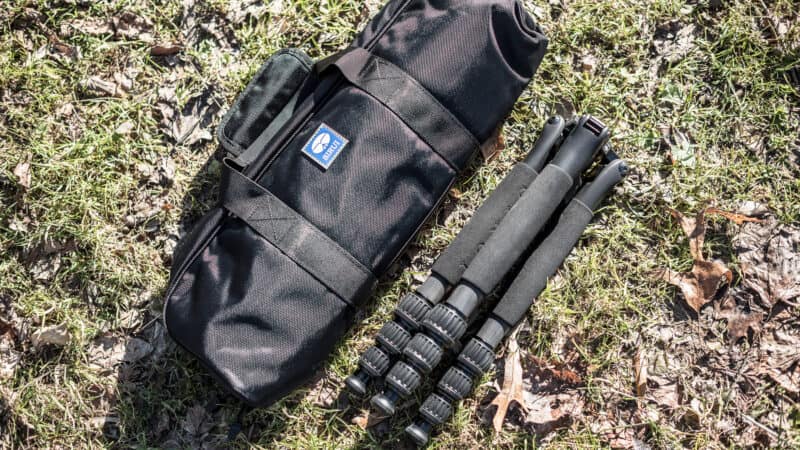 Its larger sibling, Sirui T-2205x, has been one of my favorites for a while now. And the W-2204, again slightly heavier duty, is a great option if you’re going to be shooting in damp conditions because it has waterproof seals to reduce the risk of the legs getting waterlogged or grit getting caught in the locking mechanisms.

As with many of the other travel tripods on the market these days, the Sirui T-1204 collapses down by folding back on itself. That creates a highly portable and compact package that’s still easy to unfold when you get on location.

While it has an impressive load rating of 26.5 pounds (12 kg), the T-1204SK is one of the smaller tripods in Sirui’s lineup–they also have a slightly larger and stronger Sirui T-2204SK as well as an aluminum version, the T-1004SK, that shares many of the same specs but is a bit heavier and slightly less rigid.

Sirui hasn’t been making tripods as long as some of the more established brands, but I’ve found that with each new generation they’ve been making small but useful refinements in their locks and levers. They’re not revolutionary changes, and they’re not trying too hard to do something different just for the sake of being different, as some brands seem to, but these incremental improvements suggest a company that is putting the effort into improving their products. And that’s something that I appreciate.

Most tripods are all about straight lines, all up and down. This one has some subtle but strategically placed curves. They’re especially noticeable at the top, and it’s designed in such a way that the tops flare out slightly so as to broaden the base that the head sits on. That slight spread helps ever so slightly with stability.

The legs of the T-1204SK extend in four sections. The locks use twist locks. I like that the lock grips are unusually grippy, which is useful in cold and/or damp conditions.

When unlocking, some tripods use a simple linear tension lock. This tripod uses a slight refinement of that by adding a short step when you feel a slight bit of resistance before it fully unlocks. I like this because it reduces the risk of not having the leg securely in place and having the leg collapse.

There are foam grips on all three legs, not just the usual one leg as with many other tripods. While this does a few extra millimeters across, it is also a useful touch when shooting in cold or damp conditions.

The angle of the legs are locked in place with a spring-loaded ratchet lock. It works well and is easy to use with one hand.

It comes with rubber feet fitted. They’re removable by screwing them out, and there’s a set of steel spikes included that you can swap them out for.

It comes with a center column that’s about 11 inches long. If you don’t need or want that, or if you want to shoot especially close to the ground, there’s also included a much shorter column (a little over 5 inches) that you can swap it out for.

The center column is a straight up and down affair–it doesn’t swing out sideways for vertical or macro shooting.

The bottom of the column has a hook for attaching stabilizing ballast.

The T-1204SK doesn’t come with a head as standard–it’s just a set of legs–but it uses the standard 3/8-16 thread on its mount plate, so you can attach any standard head of your choosing. The base plate is also quite broad, so you don’t have to stick to just the tiniest of heads if you won’t wish to.

You can unscrew one of the legs, remove the center column, and then attach the column to the detached leg to make a monopod. So it’s effectively a tripod and monopod in one.

I’ve been impressed with the Sirui products I’ve tried so far. They’ve been well-made and competitively priced. This tripod is another one that falls into those categories. It feels good in the hand, and I’ve found the locks to be secure and easy to use.

Overall, it’s conventional but well-executed. It’s not fancy, it’s not the lightest tripod I’ve used, and it’s not especially tall, but it meets the core expectations I have of a travel tripod: it’s stable under decent loads, it folds up into a compact travel form, it’s relatively light, I can trust it even in less-than-ideal shooting conditions, and it’s affordably priced.

You can find them at B&H Photo for $199. If you don’t already have a tripod head on hand, you’ll also need to factor in the cost of that.