Manfrotto’s Befree carbon fiber travel tripod aims to be lightweight, and lightweight it is. At only 2.4 lbs–and that’s including the head–it qualifies as ultralight. Here’s my take on how it performs in real-world use. 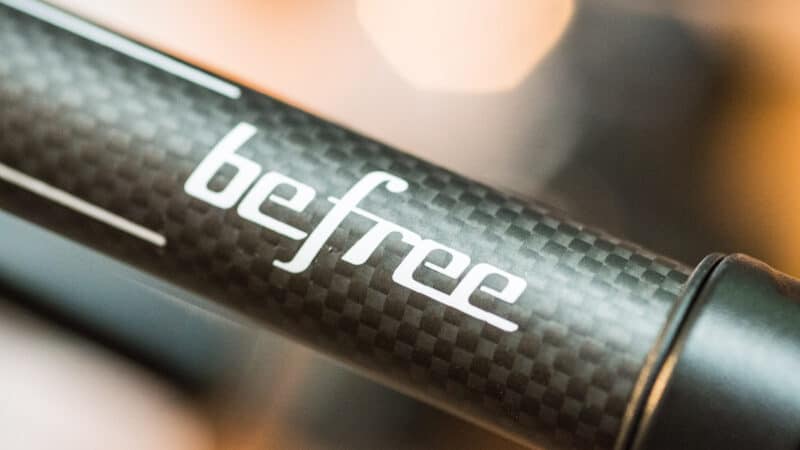 The Manfrotto Befree Compact Travel Tripod is tiny and light. The carbon fiber version retails for about $350. The aluminum version is 0.6 pounds heavier, at 3 pounds, and sells for $200.

Like most of the current crop of compact travel tripods, it folds back on itself. The plate adapter is specially designed with deep notches so that the legs will fold straight. But that only works if the quick release plate is not attached—not really an issue, since normally the quick release plate would be on the camera anyway.

The legs are thin. Spindly even, especially the bottom section.

Angling the legs out uses a locking system I haven’t seen before. There’s a kind of rotating latch with three possible positions: folded, normal angle, and splayed wide. Basically, whatever position it is in blocks it from moving any further. It’s surprisingly simple, and it’s certainly novel, but I’m not sure I’m sold on it. I found that the catch sometimes missed, which can be a problem at times when you’re focusing on other things like what’s in front of you.

When extending the legs, the locks use a traditional Manfrotto lever style. They’re bulkier than most of the rotating twist locks on the Gitzos or the MeFOTO Globetrotter. On other Manfrotto tripods I’ve used with the lever locks, they can sometimes loosen over time, although it is possible to tighten the screw to adjust the tension. The levers can also snap off, in which case you can order a replacement lever. I also dislike how the levers tend to catch on things like camera straps.

The feet are fixed–you can’t remove them and replace them with spikes or some other kind of foot.

There’s no weight hook under the central column, a feature that can be used to add heft and stability to an otherwise light tripod in a breeze.

The ballhead that comes with the Manfrotto Befree is very lightweight, and I found it a bit underwhelming. Overall, the head feels and looks a bit cheap and plasticky.

There’s a single plastic knob to lock and loosen that controls both the lateral rotation and loosening the ball. I found that getting a really secure lock for, say, using a heavy camera or making sure that it doesn’t creep during a timelapse shoot wasn’t easy. In fact, I found it almost impossible to get it to lock as tight as I’d like and am used to with other ballheads. It works well for mirrorless cameras, but it is less suited to heavier DSLRs, especially when you’re using them in portrait orientation with the ballhead angled to the side.

Manfrotto has several different quick release systems. The one that comes with the Befree is the RC2 system with a 200PL plate.

It comes with a case that fits snugly. It doesn’t have much padding and isn’t sturdy enough for me to consider checking it as luggage in a pinch. The zipper is also a bit flimsy and unlikely to stand up to regular use. Overall, the case is more of a storage case than a daily use case.

The Manfrotto Befree Compact Travel Tripod is tiny and light. The carbon fiber version retails for about $350. The aluminum version is 0.6 pounds heavier, at 3 pounds, and sells for $200.

The Manfrotto Befree succeeds in being very lightweight and is impressively compact.

For a lightweight mirrorless system like a Fujifilm X-T1 or a Panasonic Lumix GH-4 it works well.

But I found it too lightweight to be useful for DSLRs. It’s smaller and lighter than some other alternatives in its price range like the MeFOTO Globetrotter. But while the Befree wins on weight and size, the Globetrotter wins on just about everything else. You can find my review of the Globetrotter here.