There are a few different ways to change aperture on the Nikon D3500. Which method you use depends on the lens and shooting mode you’re using. Here’s a guide. 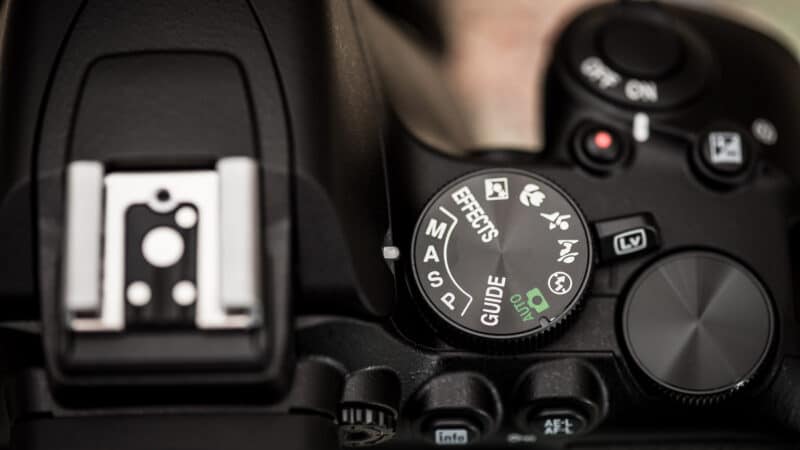 There are a few different ways to change the aperture on a Nikon D3500, so it’s not as simple as saying “press this button” or “turn this dial.” Which you use at any given time depends on the lens you’re using and the shooting mode you’re in. None of the methods is complicated, but there are some differences in how they work. And it works a bit differently from changing the ISO or changing the shutter speed, even though those three parts of the exposure triangle work together.

So here’s a rundown of how to change aperture on a Nikon D3500 DSLR.

First, though, a point of clarification. Aperture refers to the size of the opening that allows light in. So it’s actually something that refers to the lens rather than the camera—and on a DSLR like the D3500, that’s an important distinction. If you’re stepping up from a compact camera or smartphone, they generally work as an integrated system, and you often don’t have separate controls for the camera and lens. But on a DSLR or mirrorless camera with interchangeable lenses, you can often find some controls on the lens itself.

On older DSLRs and film cameras, you would usually adjust aperture by rotating a ring on the lens itself. But many modern lenses, including many that are most commonly used on the D3500, don’t have an aperture ring and instead make use of two-way electronic communication between camera and lens. That opens up the possibility to change the aperture using one of the dials on the camera body.

Which Lenses Does This Work With?

But making use of that two-way electronic linkup is not always true. There are still lenses that you can use on the D3500 that have their own aperture ring. If that’s the case, then you use that to adjust the aperture. It’s possible to use older F-mount Nikon lenses, or fully manual (i.e., not autofocus) ones for that matter that won’t allow the camera to control the aperture electronically. The way to change the aperture on those lenses will depend on the specific lens, and there are far too many different lenses to provide a one-size-fits-all answer for all of them. But by far the most common method is to use an aperture ring on the camera that rotates around the lens. You’d typically adjust that with your left hand as you support the camera and frame the shot. With most of those lenses, you won’t be able to see the aperture in the viewfinder or live view display; the lens can’t transmit the information to the camera, and the camera can’t instruct the lens to change the aperture.

What I’m referring to in this how-to guide are the lenses that are most commonly used with the Nikon D3500, lenses like the 18–55mm and 18–300mm. Or other lenses, such as Nikon’s G Lenses. Those lenses don’t include an aperture ring, so any aperture changes have to be done through the controls on the camera body.

In Which Shooting Modes Can You Change Aperture on the Nikon D3500?

You can’t change the aperture in all shooting modes.

Shooting modes that you can change the aperture:

D3500 shooting modes that you can’t change the aperture:

If you’re shooting in M (Manual) or A (Aperture Priority), you obviously can, because being able to change the aperture is a key element to making those modes work.

So the first thing to check is that you’re in a shooting mode that allows you to adjust aperture. Then there’s a different method depending on whether you’re shooting in Aperture-Priority (A) mode or Manual (M) mode. In both of the methods I outline here, I’m assuming you’re using a lens that is compatible with the camera’s dials changing the aperture.

If you’re shooting in Aperture-Priority (A) mode, the dial to change the aperture on the Nikon D3500 is at the top of the back of the camera, on the right side as you’re shooting. Its placement is the same as on the D3400, although the dial’s design has been modified somewhat.

Rotating the command dial clockwise (i.e., right to left) will lower the aperture number. That corresponds to making the size of the opening larger to let more light in.

Rotate the command dial counter-clockwise to increase the aperture setting (ie. a larger number=smaller aperture). That corresponds to making the size of the opening smaller to let less light in.

If you’re shooting with Auto ISO turned on, both the ISO and shutter speed will automatically adjust to compensate.

How to Change the Aperture on Nikon D3500 in Manual Mode

Nikon D3500 Shutter, Aperture, and Exposure Compensation You can see the +/- exposure compensation button at the bottom of this shot. Just below it, you can see the icon that looks like the internal blades of a camera lens—it denotes aperture.

Things Worth Knowing About Changing Aperture on Nikon D3500

Lens aperture works in concert with the other two sides of the exposure triangle: ISO and shutter speed. To maintain the same exposure, if you adjust one, you need to adjust at least one of the other sides.

As an example, if you reduce the aperture, it will make the opening smaller, which will let less light in. If that’s all you do, the exposure will be darker. If you want to maintain the same exposure, you’d need to either slow down the shutter speed to keep the shutter open longer or increase the ISO to make the sensor more sensitive (or some combination of both of those things).

When to Use a Small Aperture on Nikon D3500

Using a small aperture, such as f/16 or f/22, is useful for a few different shooting scenarios:

When to Use a Large Aperture on Nikon D3500

Using a large aperture, such as f/2.8 or f/3.5, is useful for a few different shooting scenarios:

Apertures work somewhat counterintuitively in that a large number (eg. f/22) actually refers to a smaller aperture (ie. a smaller physical opening to let light through). Conversely, a large aperture is referred to by a smaller number (eg. f/1.8 or f/2.8).

In other words, the larger the physical opening, the lower the number.

What does a “fast” lens mean?

But there’s not a fixed threshold. In part, because it’s subjective. And in part, because focal length matters. If a long telephoto lens of 400mm has a maximum aperture of f/3.5, it’s considered fast (and will almost certainly be expensive). But for a 50mm lens to have a maximum aperture of f/3.5 it would be considered quite slow (fast 50mm lenses are more in the f/1.4 and f/1.2 range).

Some lenses, such as Nikon’s 18–55mm and 70–300mm, both of which are often included as kit lenses with the D3500, have a range in the aperture area for its name. What that means is that the maximum aperture available depends on how much it is zoomed.

This is due to the optical design of the lens. There are other lenses that have a constant maximum aperture throughout the zoom range. They’re often higher-end lenses (and more expensive).

What is the Nikon D3500 Aperture Range?

The aperture range is a characteristic of a lens, not the camera. And since the D3500 is an interchangeable-lens camera, the whole point of that is that it can be used with different lenses.

I have a separate post on how to change the ISO on a Nikon D3500.

How to Change Shutter Speed on Nikon D3500?

I have a separate post on how to change the shutter speed on a Nikon D3500.