The MantisPod Pro is a Versatile Camera Grip & Tabletop Tripod 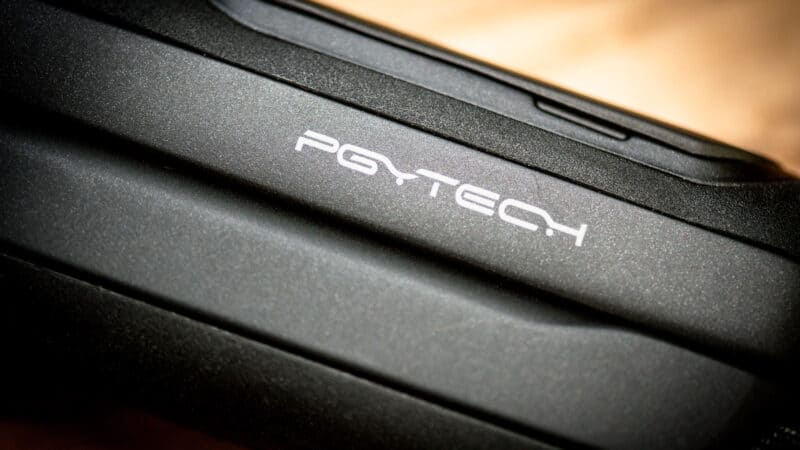 There are a million different ways to mount your camera and almost as many accessories to do help do it. Much of the innovation in this space these days is with manufacturers finding ways to combine different kinds of mounts in one device. So instead of carrying a tripod and a separate monopod, some of the newer tripods have legs that detach to become a monopod. Or some camera grips turn into tripods or selfie sticks or tabletop tripods or float–or all of the above.

I’ve recently been trying out the PGYTECH MantisPod Pro. PGYTECH sent me one to try, and I’ve been putting it through its paces.

PGYTECH markets this as a vlogging tripod. And it’s great for that. But I don’t do vlogging–I hate being in front of the camera. But I do a lot of on-the-go photo and video and time-lapse shooting where I’m trying to keep things light and highly portable, and I’m using a bunch of different cameras in a bunch of different locations. And that is the type of use where the MantisPod appeals to me and how I’ve been trying it out.

To cut to the chase, this is one of the most versatile handheld mounts I’ve seen. To say it’s a grip and a tabletop tripod doesn’t really do it justice–there are a lot of those on the market. But there are several things about this one that set it apart from the others I’ve tried.

For one, it’s very solidly built. This isn’t some flimsy plastic contraption. All of the key parts are metal, and you can feel that it’s solid the moment you pick it up. The joints are snug and don’t have any extra wobble. There are a few sections that are rubberized for better grip, but they’re layered on top of a metal base.

There are a few sections to the MantisPod, and they work in different combinations to accomplish different stances and supports.

Here’s a quick rundown of some of the sections and configurations I’ve found useful. 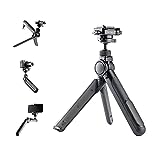 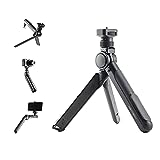 NB: There are two versions of the MantisPod available. The ballhead is included with the MantisPod Pro. The regular MantisPod only includes the simpler head described below.

Starting at the top, there’s a ballhead. Well, actually, it’s one of two heads that come with the MantisPod. The ballhead is the better and more capable of the two, but there’s also a simpler head that has the virtue of having fewer moving parts (more on that below).

And it’s a surprisingly solid one. Again, it’s metal rather than plastic. And it locks into place well. It even comes with an Arca-style quick-release plate. The locking mechanism around the ball is a simple lever lock, but it’s also very effective–I’ve found it locks much more reliably than the usual twist-lock that you often see on smaller ballheads. The ball isn’t the smoothest I’ve seen–in fact, it’s a little on the rough side–but it works well enough for the purpose. This isn’t the type of support you’d probably choose for panning shots, but for positioning and locking into a fixed position, the ball is more than smooth enough.

Quick-Release. It uses a standard Arca-style quick-release plate, and in a nice tough, it even comes with a plate. But if you already have this style of plate on hand, it’s probably compatible. I like to use the Peak Design quick-release plates on my cameras, and it works just fine with those.

The top section of the ballhead rotates independently of the ball. There are markings on the dial to help identify degrees.

And, finally, the whole ballhead is actually part of another quick-release mechanism. Rather than screwing onto the legs, the ballhead slides into another slot—a cold shoe—and there’s a small locking mechanism for it as well as a rotating locking ring to hold it firmly into place and prevent wobble. And if you’re wondering why you’d want to have the ballhead on a quick-release mechanism, it’s because you can detach it and re-attach it to another mounting point on the side of the legs.

This brings us to the legs.

The legs collapse together to form a shooting grip. A button at the top of the largest of the legs releases them so that they can be pulled apart. There are positive clicks are preset angles to lock the legs into position when they’re splayed.

To alter the angle of the head assembly, push on the largest button on the side.

And in another nice little touch, they’ve also made sure that the bottom of the legs are covered in just enough rubberized material that it provides grip for the parts in contact with the surface it’s sitting on.

NB: The MantisPod Pro includes both the ballhead and this second head. The regular MantisPod only includes this head.

I mentioned that there’s a second head included in addition to the ballhead. This one is simpler and has fewer moving parts. But it still has some nice touches.

It uses a standard 1/4-inch tripod screw rather than a quick-release plate. There’s a dial on the side that you use to tighten into your camera.

There’s a button on the side that unlocks the rotation, and there are click-stops every 90 degrees. Which would be very handy for going from a selfie shot to spinning it around to face away without having to rotate the entire tripod.

And like the ballhead, this head is also on a quick-release mechanism, so you can easily and quickly detach it and swap it onto the top mount.

The MantisPod is a pretty flexible grip and tripod, but it gets its name from its party trick. They’re calling it Mantis Mode.

One leg has a short clip that flips out. You can use that to lock onto a thin vertical surface, with the clip hooking over the top. Picture something like a car window (the glass, not the door frame). Or a thin horizontal railing. Or a wooden fence (the plank style).

The catch is that it doesn’t work on thicker surfaces; it has to be less than 3.5 inches / 90 millimeters for it to get a secure grip. And the other two legs have to be supported against the surface–they can’t be hanging loose.

Obviously, common sense is required when using it in this way in particular. It’s held in place by gravity–there’s no clip or lock. So it’s not going to be good mounted on things that are moving, like a boat or car, or in high-wind situations. But for a quick hang-it-from-this mount, it works well.

There’s a different way of mounting this that PGYTECH calls Mantis-mode. There’s a small hook arm that folds out from under the main leg. You can use that to hang the mount off a fence or railing. And while you obviously have to take some care, especially with a larger camera, it’s a surprisingly secure way of mounting to some vertical surfaces.

It also comes with a smartphone holder. You won’t see it in the box–it’s neatly tucked away in a compartment inside one of the tripod legs. To access it, locate the largest (thickest) of the legs. On the underside of the leg is a recess, and wedged in there is the small smartphone holder contraption.

On the largest leg, you’ll notice a compartment. Inside is a button that says “Press.” It took me a minute initially to figure out what this was. But it’s another mounting point. And it would be especially useful for an accessory such as an external microphone, a small light, or a remote shutter release or intervalometer. You could even mount a smartphone on there.

There’s no extension pole to get extra length, and it definitely doesn’t float.

I’m lucky enough to get the opportunity to try out a lot of different mounts and tripods and other kinds of supports. I usually only review and post about the ones I find most interesting. And only the ones I find truly useful earn an ongoing place in my bag. The MantisPod is one of those rare supports that has earned a place in my travel kit.

It’s light, well-built, and extremely versatile. And it’s rare that I don’t come away from using a support where I’m thinking, “I wish it did this,” or “I wish this doohickey was designed a little differently.” The designers of the MantisPod have clearly really thought about their product rather than just slapping together yet another camera grip to go along with the hundreds of others that are already available. There’s no particular technological breakthrough with it–it’s just very well designed and built.

And it’s strong. In addition to smaller cameras, I’ve had no problem using it with a large DSLR–a Nikon D850–mounted with a “normal” sized lens. I wouldn’t trust it with a large telephoto, naturally, but that’s not what it’s designed for. And you obviously have to use common sense to make sure the center of gravity isn’t going over the front of the skis and is at risk of tipping. I’ve also used it with a GoPro, and for point of reference, the camera in some of the shots above is a Nikon D3500, a smallish DSLR.

I have found that it takes a little while to get used to naturally configuring it without looking. There are several buttons and levers and dials that lock and release various aspects of it, and at first, I had to keep stopping and thinking which controlled what. But it gets more natural the more you use it.

Overall, the MantisPod is well worth a look, whether you’re vlogging or, like me, shooting stills, video, and time-lapse on the go while packing light. In a crowded marketplace of cheap accessories, this one comes at a premium price. But from using it for a while now, it also earns that premium price with thoughtful design, solid build, and high quality.

Price & Availability of the MantisPod Pro

There are two versions of the MantisPod available.

The MantisPod Pro includes both of the heads described above, including the ballhead with the quick-release plate.

You can find it at Amazon, B&H Photo, Adorama, and directly from PGYTECH.

The standard MantisPod includes only the simpler screw-on head.

You can find it at Amazon, B&H Photo, Adorama, and directly from PGYTECH.

PGYTECH also sells reasonably priced Arca-style quick-release plates that you can use as a spare for the MantisPod or for other compatible systems (eg. many tripod heads and the Peak Design range, for example).

The MantisPod Pro is a Versatile Camera Grip & Tabletop Tripod