How to Format a Memory Card in the Sony a6000

This is a straightforward guide on how to format memory cards in the Sony a6000 camera to free up space and to prepare the memory card just the way the camera wants it. 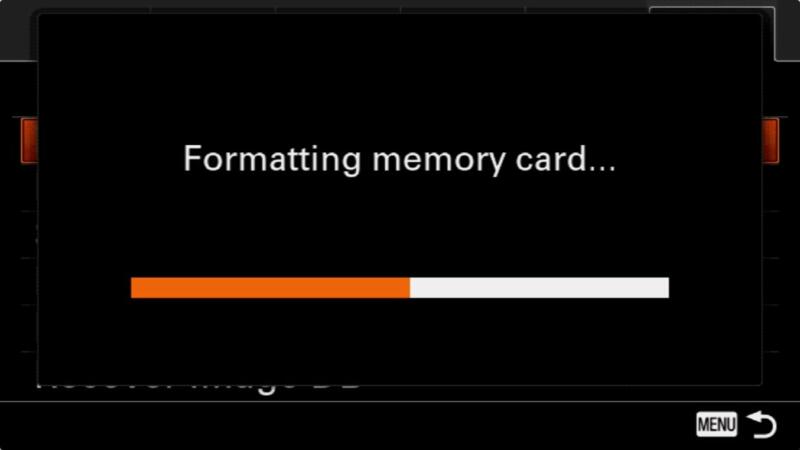 Once you’ve downloaded all of the photos from a memory card in your Sony a6000 and saved them in a safe place (with a backup, of course), it’s time to delete the photos from the card to free up space for new ones.

While you could, technically, delete them individually using the delete button (trash can icon), that’s an awfully slow and tedious way to do it. A much better way–and, as it happens, a safer one, too–is to format the memory card.

Formatting the card not only deletes the photos and videos from the card–it also sets the card up in the way that the camera wants and expects it. And that reduces the risk of errors. 1

On the Sony a6000’s menu system on the back screen, you’ll find the Format item under page 5 of the tab with the toolbox icon.

Formatting the memory card deletes all the data on it (although it might still be recoverable). So when you click on that option, you’ll be asked for confirmation.

It’ll then take a few moments to format the card, giving you an orange progress bar.

Once it’s done, it’ll return you to the main menu automatically.

What to Do if You Accidentally Format Your Memory Card

Despite the extra confirmation step, it can still happen that you realize too late that you didn’t really want to format the memory card. In theory, your images are gone. But in practice, it might still be possible to recover them.

The first thing to do is to stop using the memory card. You don’t want to be writing anything else to it if you can help it. Then it’s time to break out some data recovery software. There are several available, and while they all do similar things, they do it in different ways. Some are free, and some are paid, although many of the paid ones have a trial version that at least allows you to see what’s recoverable and then decide whether or not to buy a license so that you can actually make a recovery.

I’ve put together a roundup of the best software to recover deleted photos here.

How to Format SD Cards on a Computer

It’s always best practice to format memory cards in the camera you’re going to use them in, but if that’s not possible or not what you want to do, you can also format cards using a computer. But there are some things to know when formatting SD cards to minimize the risks of your camera having problems with them. So I’ve put together guides on how to format SD cards on Mac and how to use the free SD Card Formatter app for Windows or Mac.

How to Format a Memory Card in the Sony a6000