The Sony a7R IV gives you several options when it comes to choosing which file image file format to use and how to work them into your workflow. Here’s a rundown. 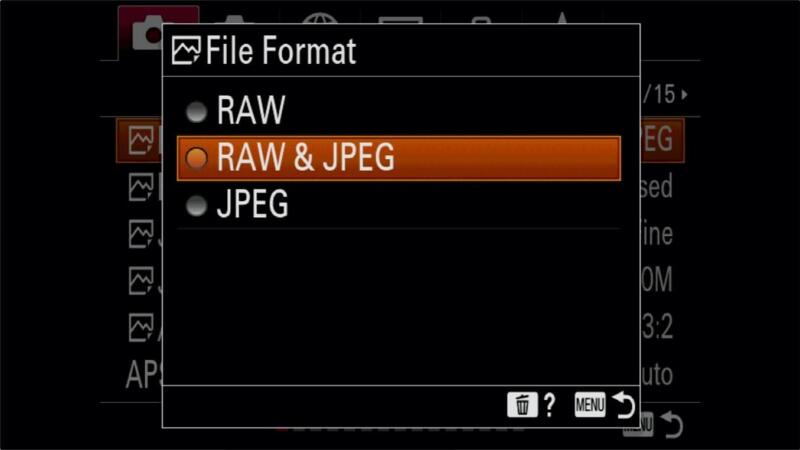 Many cameras that let you choose the RAW image format also make available the option to shoot RAW+JPG that saves a file in each format simultaneously. While it obviously uses up more filespace on the memory card and adds extra files to contend with in your processing workflow, there are several reasons that it might come in handy. You get a backup copy. You have a version that’s ready to share without any post-processing. And the in-built processing power of modern cameras can create better-looking photos in challenging conditions, especially at very high ISOs.

Unsurprisingly, the Sony a7R IV also has the RAW+JPG option available. Here’s a rundown of how to work with it in the camera and in your workflow.

Applying the setting is simple enough, but there are some extra considerations such as how to save the different image files and then how to use them in your workflow. I have more on those aspects below.

The option you’re looking for is the very first setting in the menu. Specifically, it’s under:

When you first fire the a7R IV up, it’s set to JPEG by default. 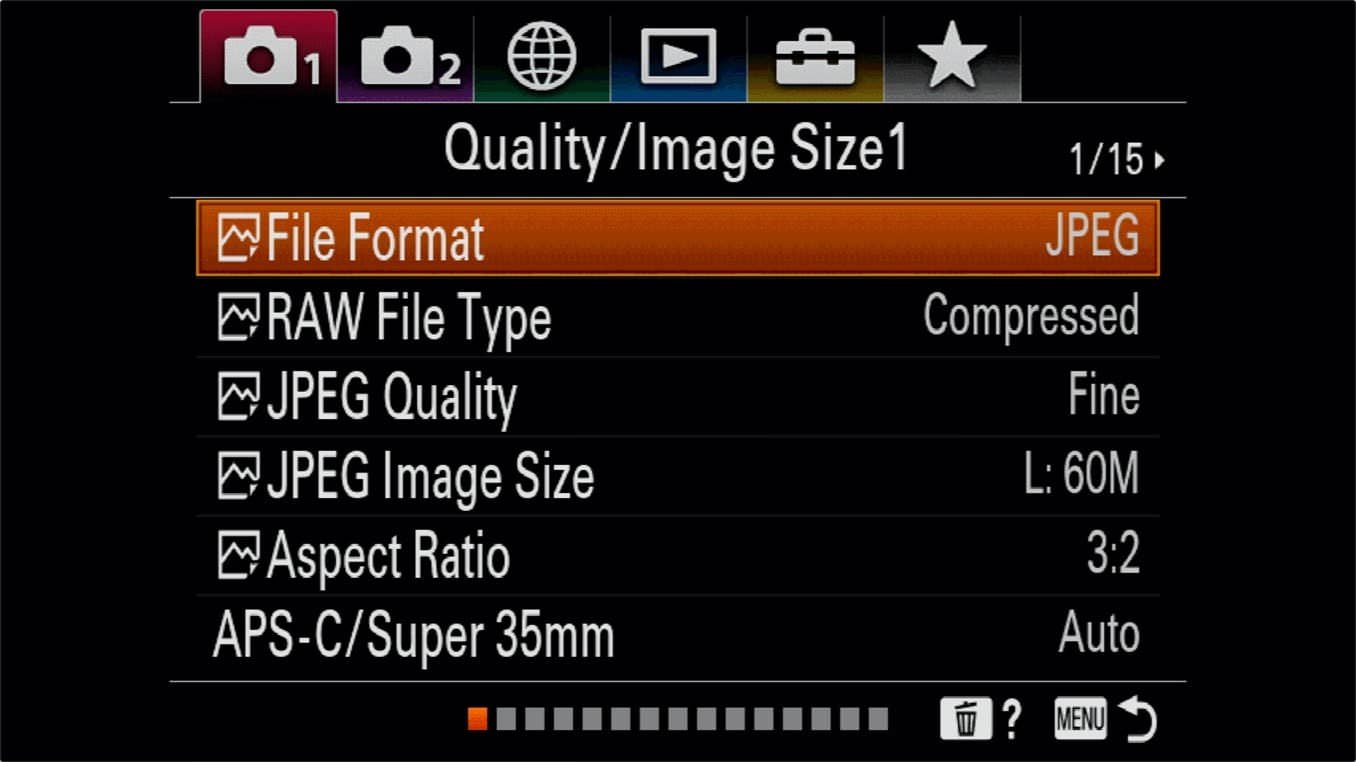 Once you go into that setting, you have a choice of RAW only, RAW and JPEG, or JPEG only. 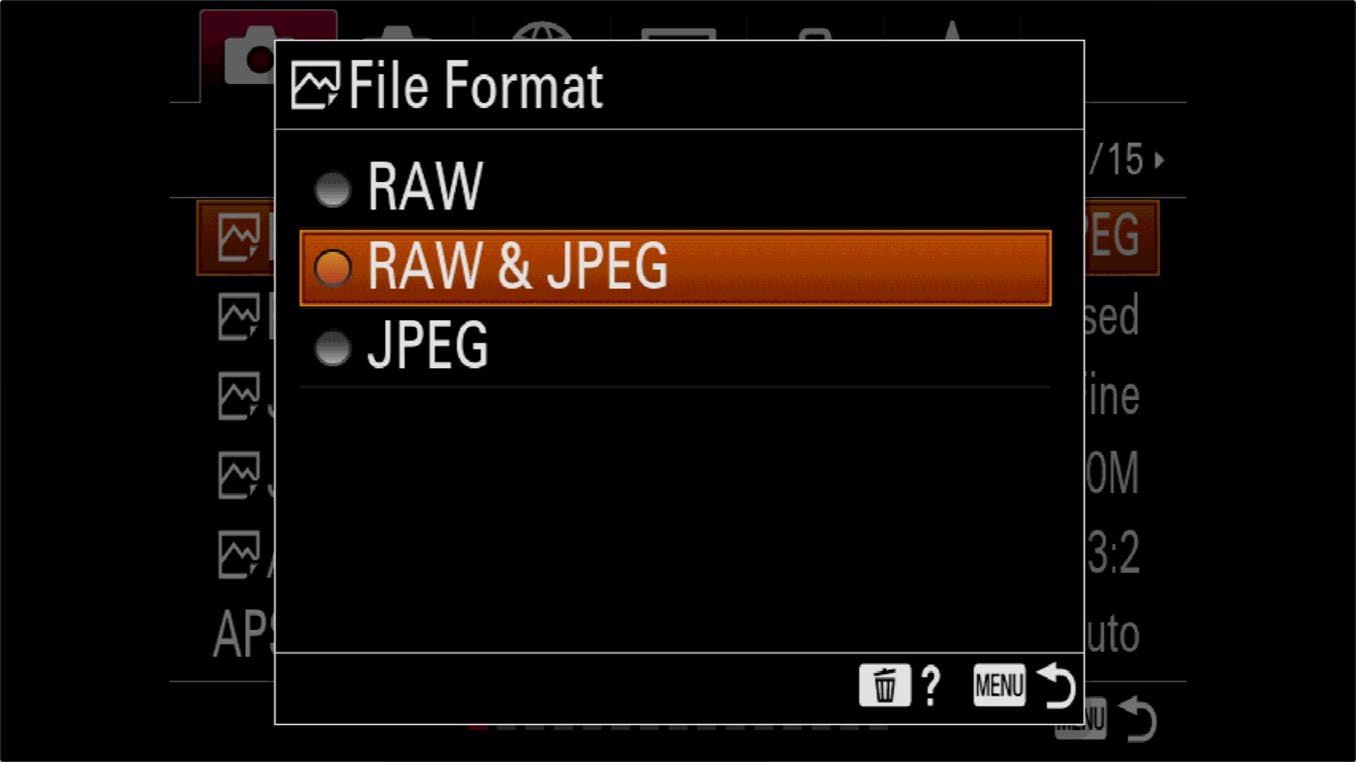 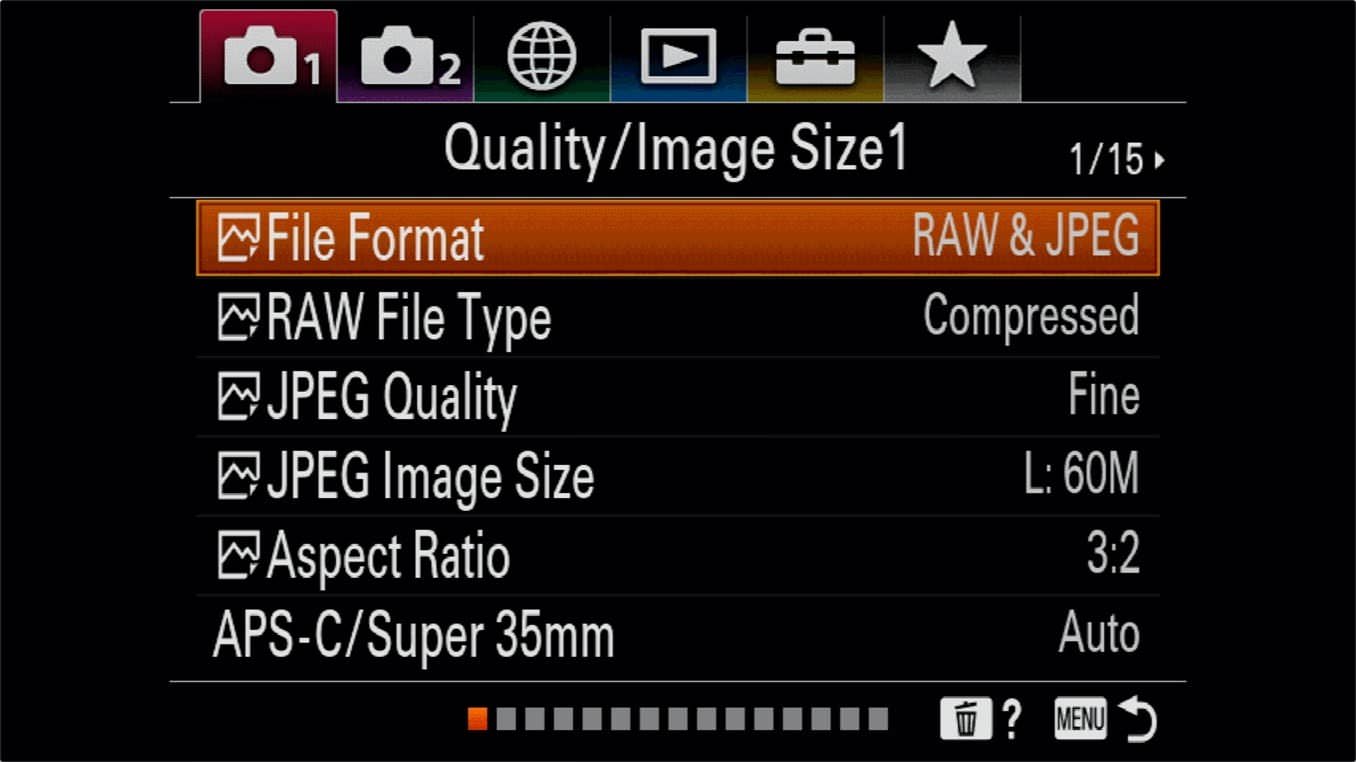 A related option you can then set is whether you want the RAW files compressed or uncompressed. The compressed option creates RAW files that are roughly half the size.

You find this option directly under the File Format one on the very first page of the menu: 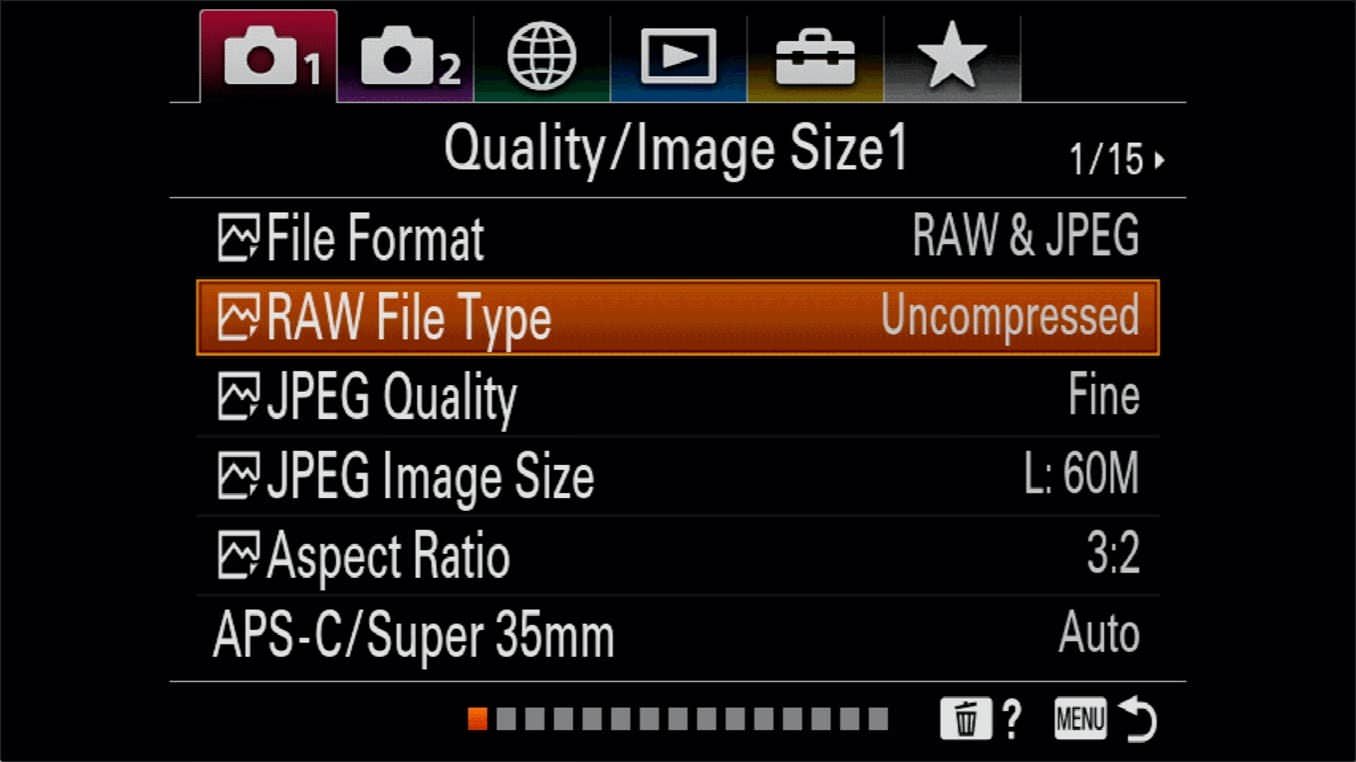 You have only two choices: compressed and uncompressed. 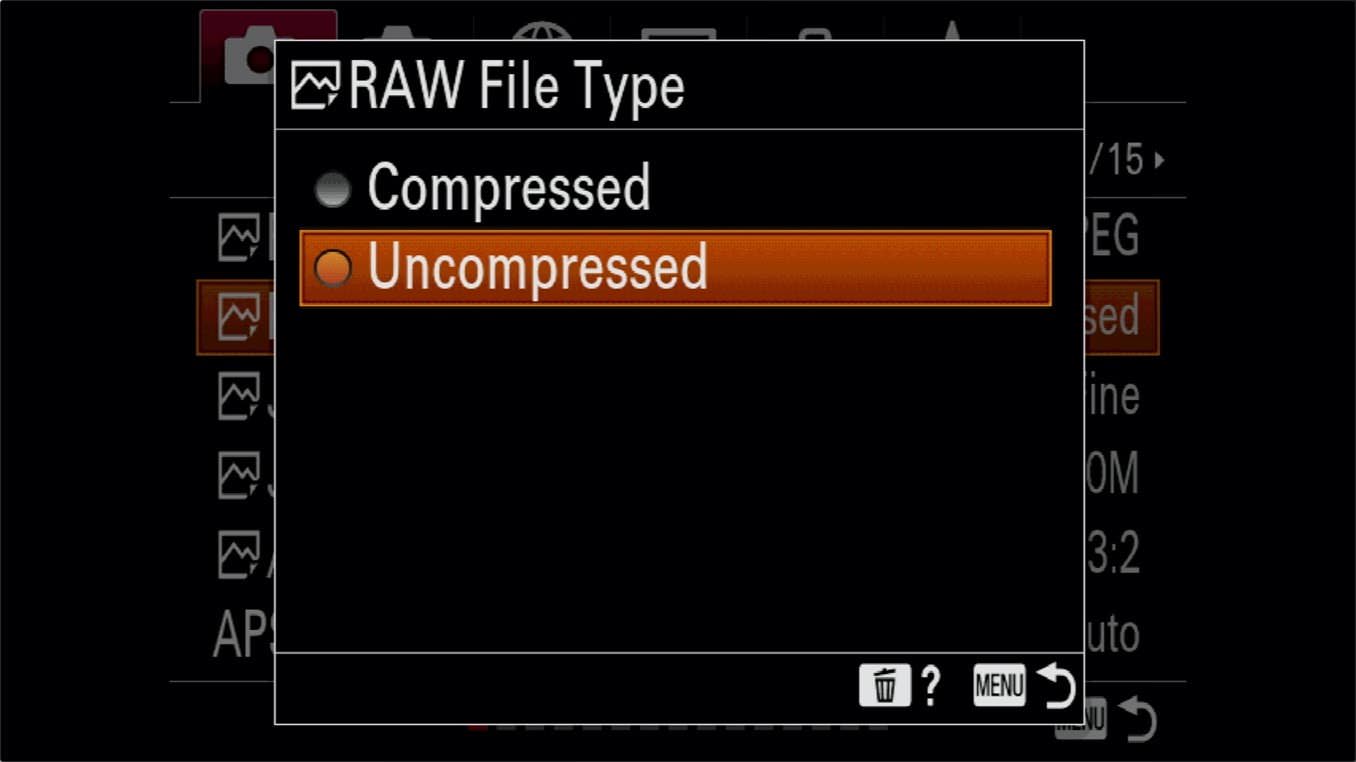 The compressed option creates 12-bit compressed files. On the plus side, the files are about half the size (filesize, not resolution) of those created by the uncompressed option. On the minus side, you can get some compression artifacts in some scenes when viewed at 1:1.

The uncompressed option creates 14-bit uncompressed files. They are of higher quality because of the extra bit depth and partly because there’s no risk of compression artifacts. But take twice as much space on the memory card (and, eventually, hard drive). And with the 14-bit uncompressed RAW files coming in at around 123 MB each, that can be a consideration.

There’s no “right” answer as to which to use. I use the uncompressed option—I’d rather be managing space than compromising on image quality. That said, the compressed RAW files are still very high quality, and the reality is that in many situations you probably won’t notice much, if any, difference.

Having set the option to record both the JPG and ARW versions, you can then decide how you want them to be saved. You can have the RAW and JPG files saved side-by-side on the same memory card or separate them out, with RAW files being saved on one card and JPG files saved on the other. 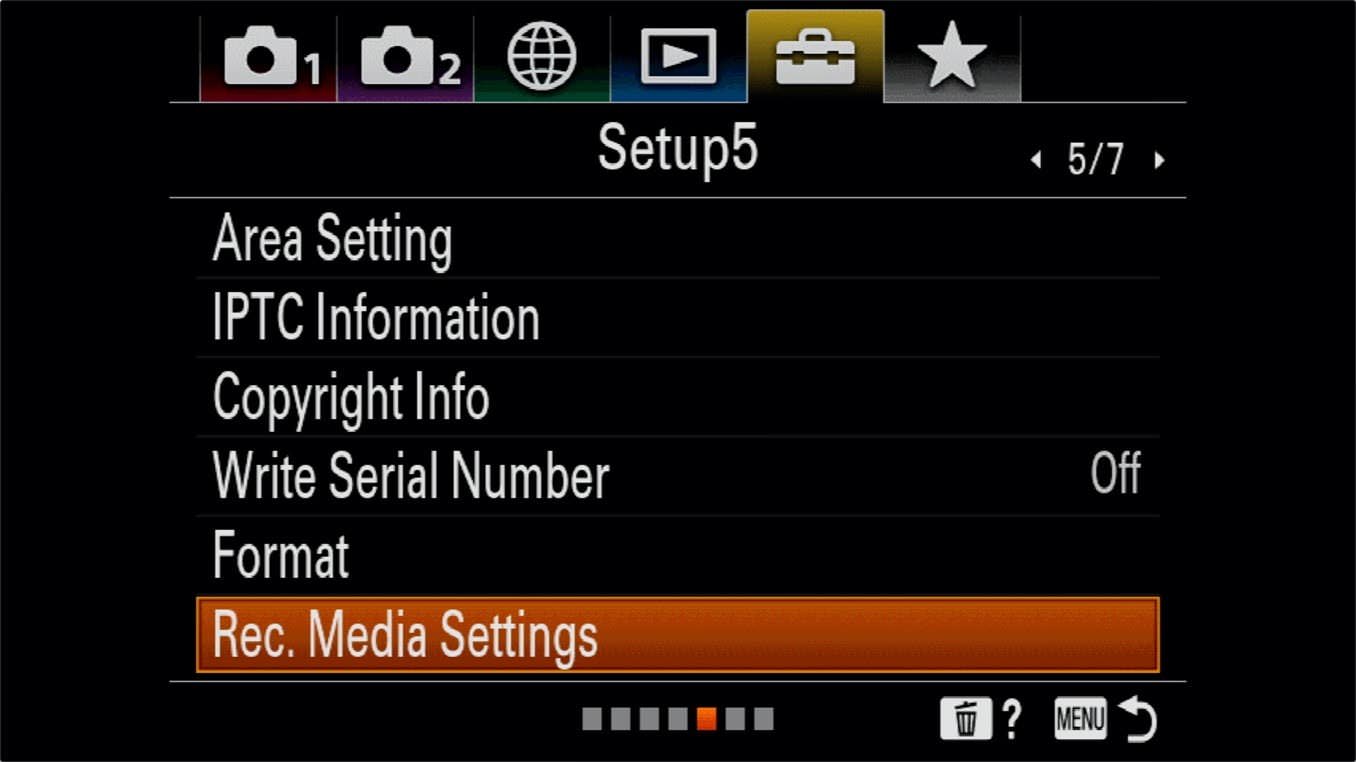 The simplest option is the default Standard: it saves them both to the same memory card, side-by-side.

If you want to save RAW files to one memory card and JPGs to the other, you want the first two Sort options. The difference between these two is which card (or slot) is used for which format. This might come into play if you have a much larger-capacity card in one slot, or a much faster UHS-II in one and a slower UHS-I card in another. 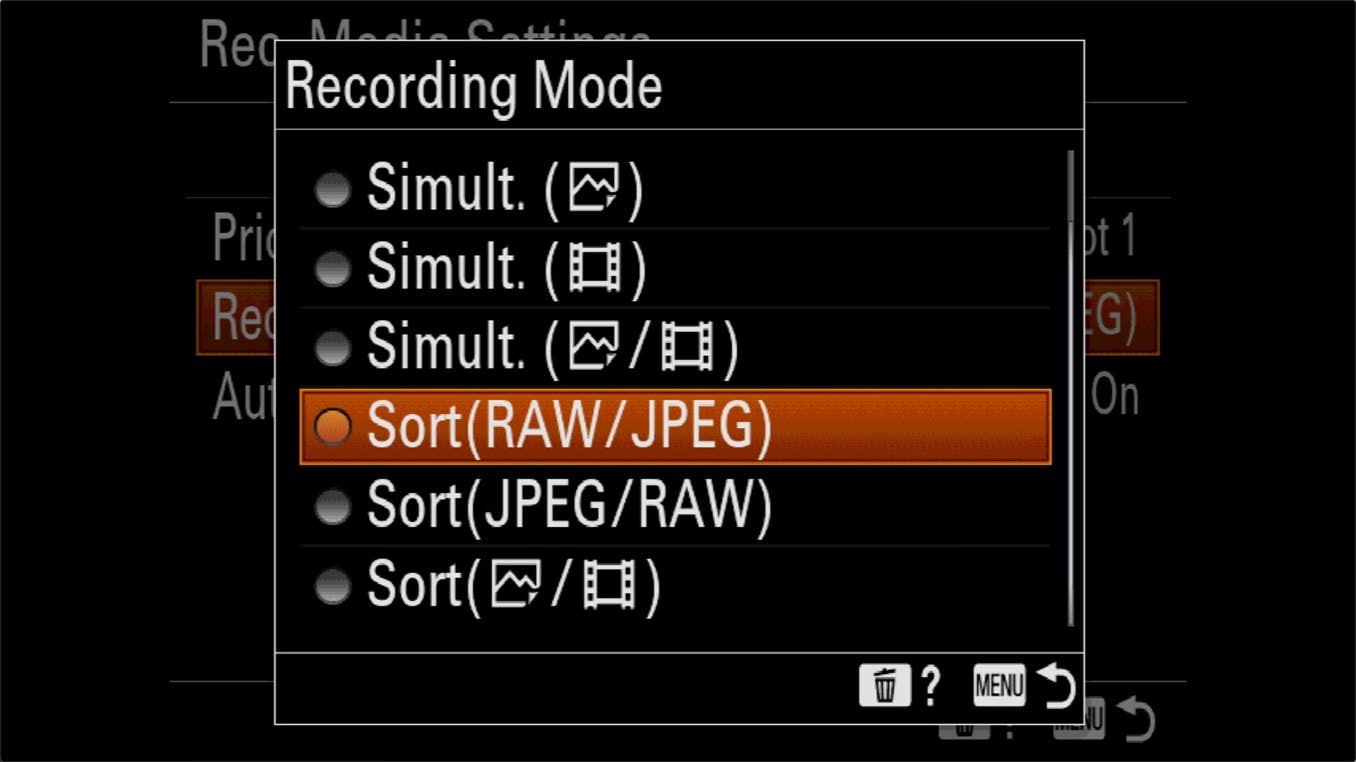 How to Import Both JPGs and ARW Files Into Lightroom

If you’re using Lightroom in your photography workflow, you have some choices about how to handle the JPG versions.

Lightroom gives you a way to choose what it does if it detects both a RAW and JPG version of the same image on a memory card.

One option is to import only the RAW version. That makes sense if you’re trying to simplify your workflow and don’t plan to use the original JPG versions for anything. You might have use for those JPGs straight out of the camera—say, if you’re posting images to social media or friends from the field—but once you’re back at your desk and using Lightroom, you only need the better RAW files now.

The other option is to import both the RAW version and the JPG version. For that, Lightroom Classic CC has a specific option. You find it under: 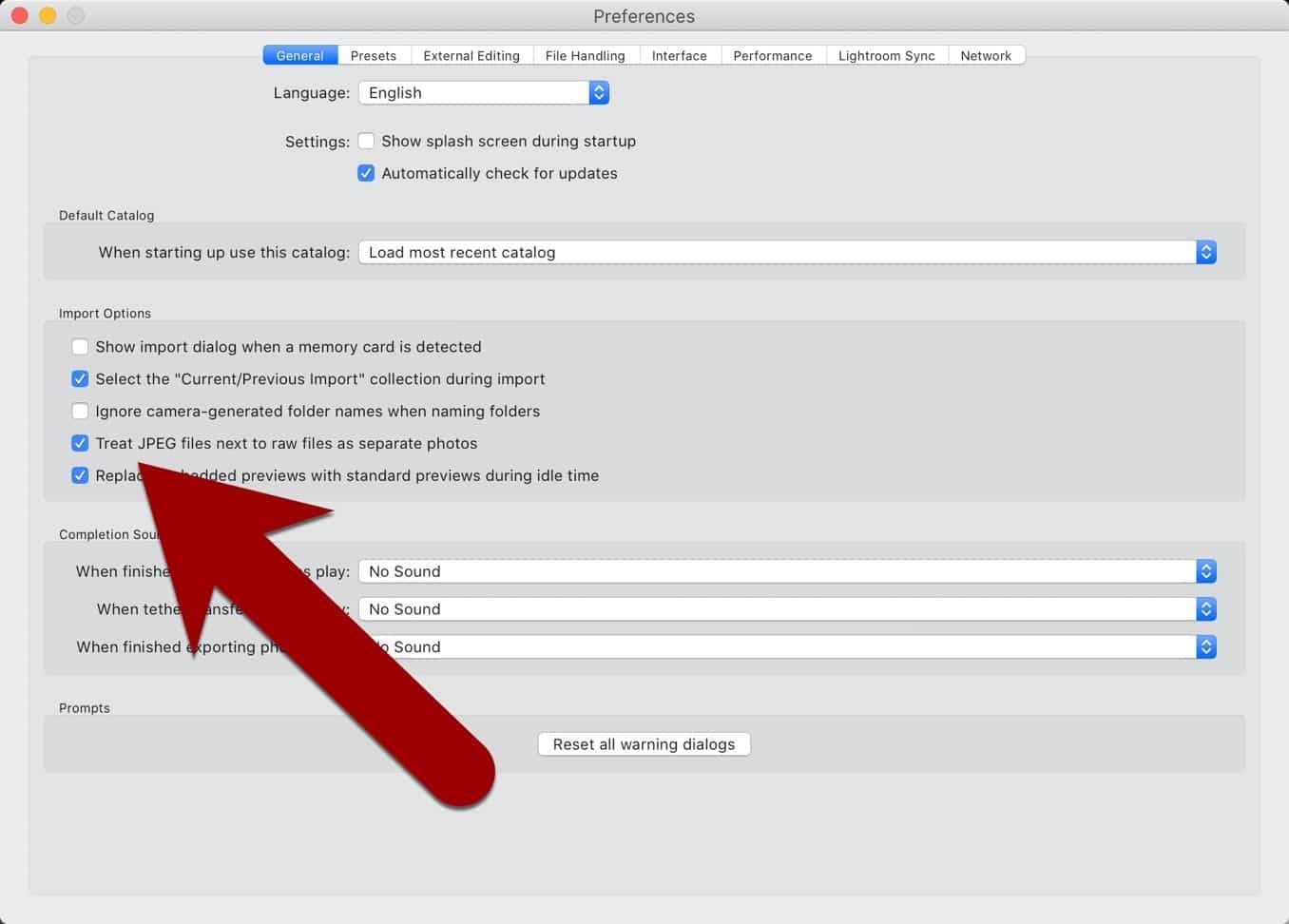 This will import both versions and display them as distinct files. Unfortunately, there’s no current way to have them automatically stacked after import—that would be the logical progression for me. And the workaround of using the Auto Stock by Capture Time and setting it to 0 doesn’t work well because the smallest time increment is full seconds, and many cameras, including the a7R IV, can shoot far more rapidly than that. But if you want to filter just the JPGs or just the RAW files, you can easily do so in the Library module by using the filter bar and choosing the filetype filter.

If you’re using PhotoMechanic to ingest and cull your images—and there are good reasons why you might want to—there are three options in PhotoMechanic’s preferences that you’ll want to look at.

The first determines how PhotoMechanic ingests them. On the main Ingest screen, on the right-hand side you’ll see two drop-down menus under the Filter Files section. The second is the one you’re looking for. Under that, you’ll find three options: 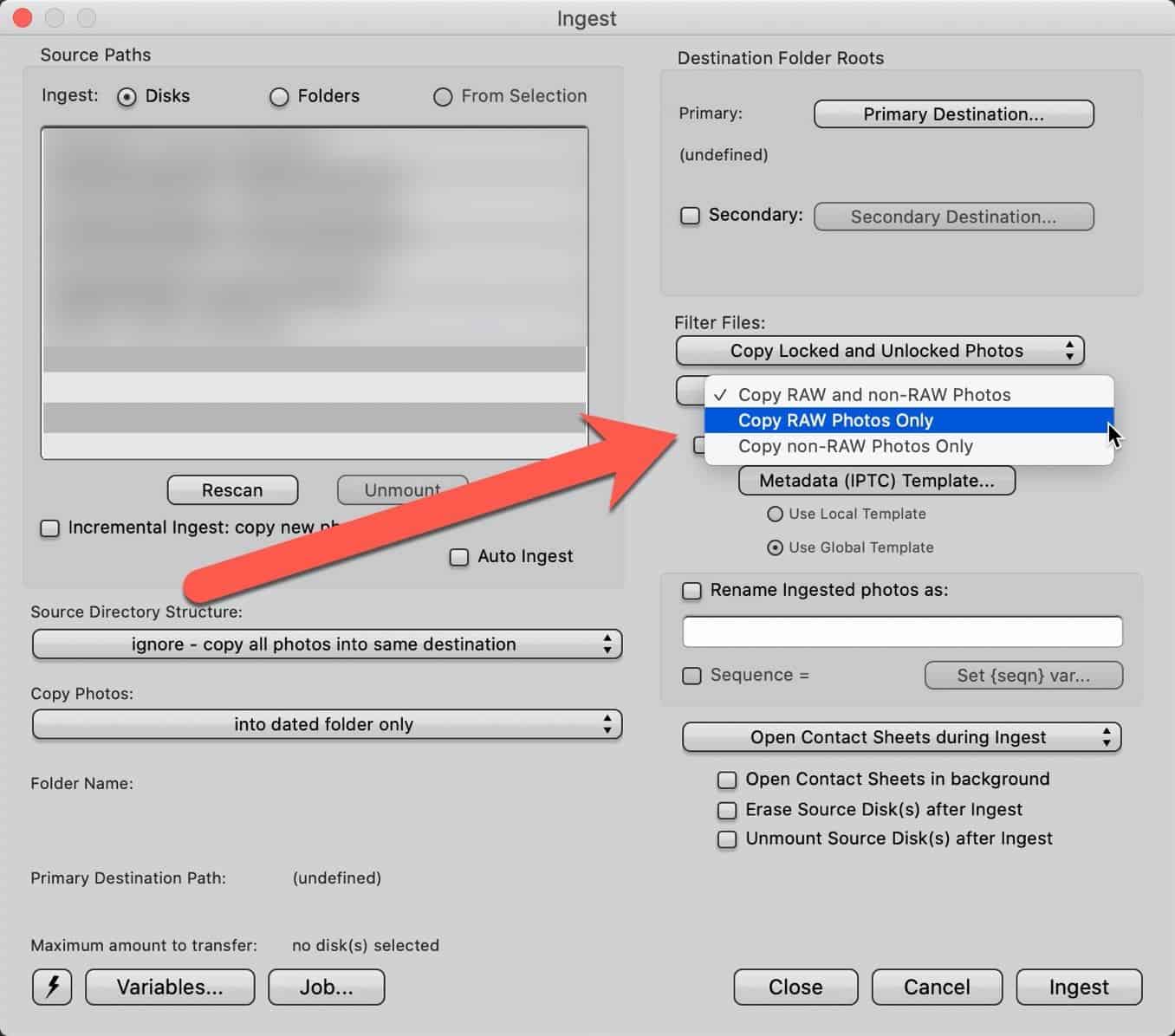 The second concerns the behavior of how the two versions of the file are displayed in the Contact Sheet view. You can have both versions stacked under a single thumbnail or display them as two independent files. One reduces clutter; the other gives you maximum flexibility but risks adding confusion.

You find that setting under: 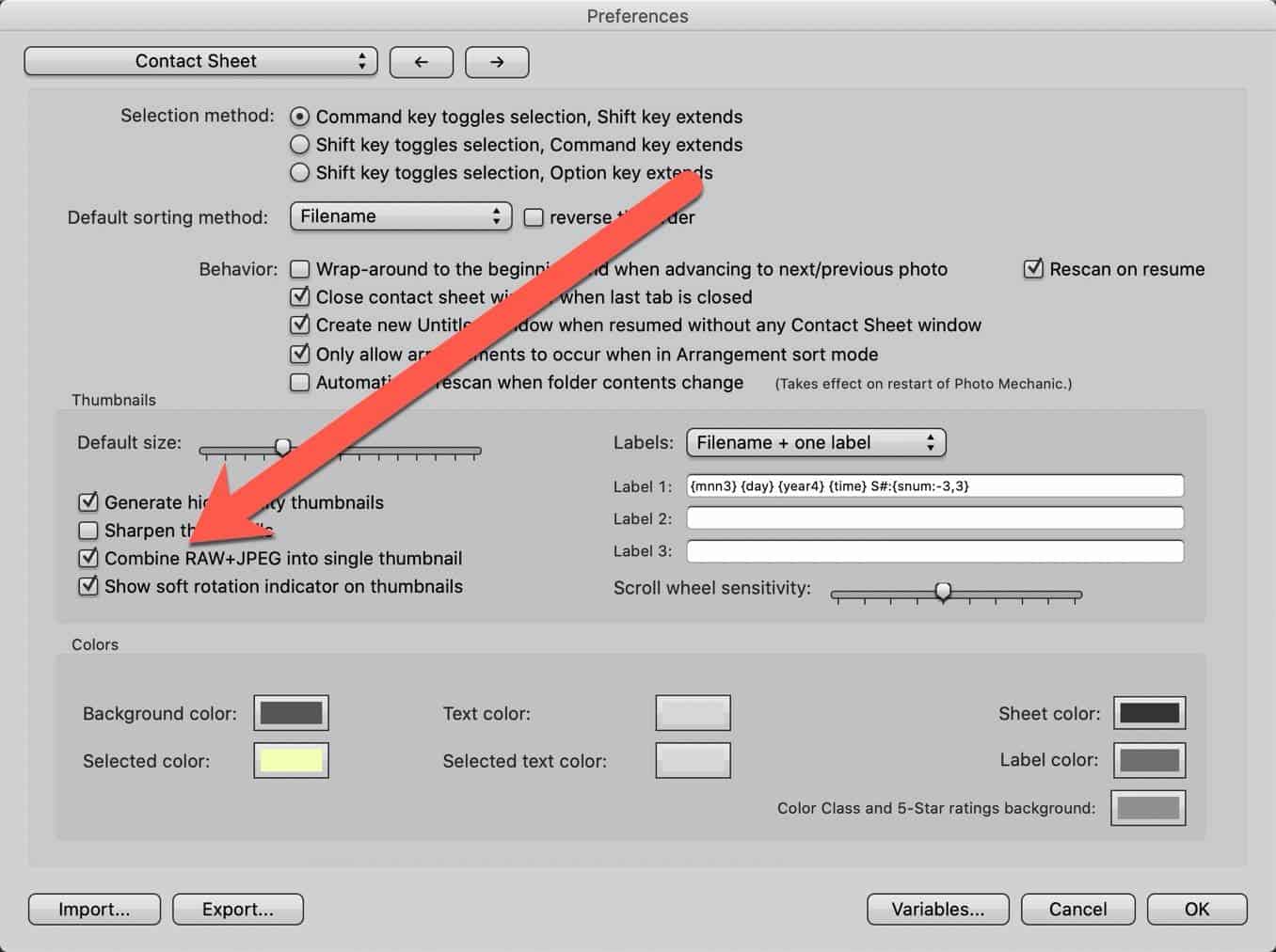 If you have it set to treat both versions under a single thumbnail, that’s obviously going to introduce some ambiguity if you send the image to an external image editor or perform other operations. Should it send the RAW or the JPG? So there’s a setting that clears up the ambiguity.

You find it under:

Preferences > Launching > When in RAW+JPEG mode, editing a photo will:

You then have two choices: 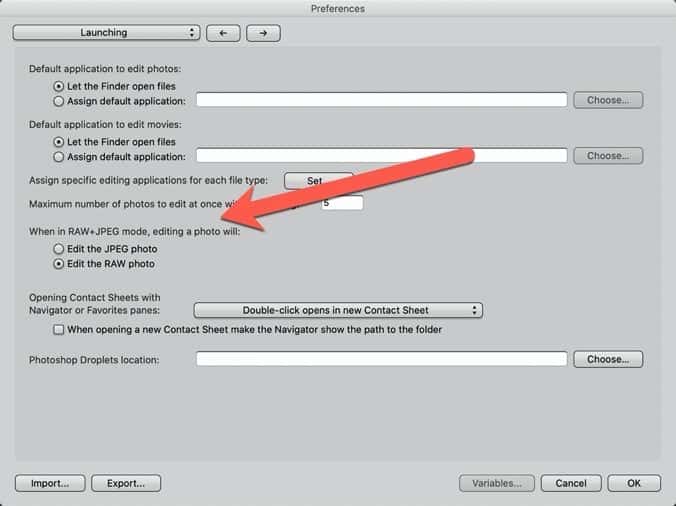