I put the smallest and lightest of Gitzo’s new center ball tripod heads to the test. It’s designed as the perfect pairing with Gitzo Traveler Series 0 and Series 1 travel tripods. 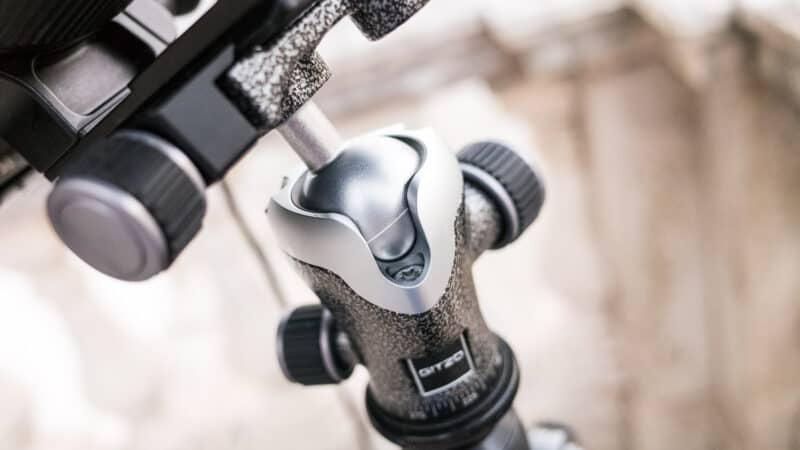 Having a good tripod with you when you’re traveling can mean the difference between getting a great shot and not getting a usable shot at all. But they can be a real pain to lug around with you. So for quite some time now, I’ve been testing out travel tripods to find the best combination of performance, mobility, and value.

While there are many travel tripods available that come bundled with their own ballhead, there are times you might want to use a different combination. So you can often buy just the legs and just the head and mix-and-match your preferred combination. (For tripods that aren’t available in a legs-only configuration, you might have to buy the bundled package and swap out the head yourself.)

So lately, I’ve been throwing some standalone ballheads into the mix. These will work with any set of the tripod legs that doesn’t have the head fused to the legs—in other words, they’ll work with the vast majority of tripod legs thanks to the defacto standard that tripod and camera manufacturers have adopted 3/8-16 studs and thread combinations to attach tripod heads to tripod legs (it’s a bit wider than the usual 1/4-20 stud that’s used to attach most consumer cameras to the head).

I’m focusing mainly on ballhead-style tripod heads because they have advantages for travel tripods over the older-style lever approach. They tend to be smaller and lighter for a comparable maximum load weight, and they don’t have levers sticking out to make it a pain to pack in your bag. They’re also more common these days and readily available.

Gitzo has three models in this series of new Center Ball Heads, each with a progressively higher maximum load weight, as well as each one being a little heavier and larger. All of them use the Arca-style quick release system.


The model I’m focusing on here is the GH1382TQD, which is the smallest and lightest in the series. It weighs 0.9 lbs and has a maximum load rating of 24 lbs. The other two models are:

They all have the distinctive speckled finish that Gitzo has been using in its metal fixtures for some time.

Overall, the body reminds me a bit of the iconic Coke bottle shape. Where most tripod heads are boxy cylinders, this one has curves, widening at the top with the ball cradle. It makes for a narrow base, relatively speaking, that works well on travel tripods that have space-saving narrow mounting plates. But if you happen to be using it on a larger set of legs with a broader base plate, it won’t give you quite the same level of rotational grip or lateral stability.

On the head itself, there are two knobs. One locks the panning rotation at the base of the head. The other is the main clamp on the ball.

There’s another knob on the side of the quick release baseplate that clamps down on the QR plate to hold it firmly in place. 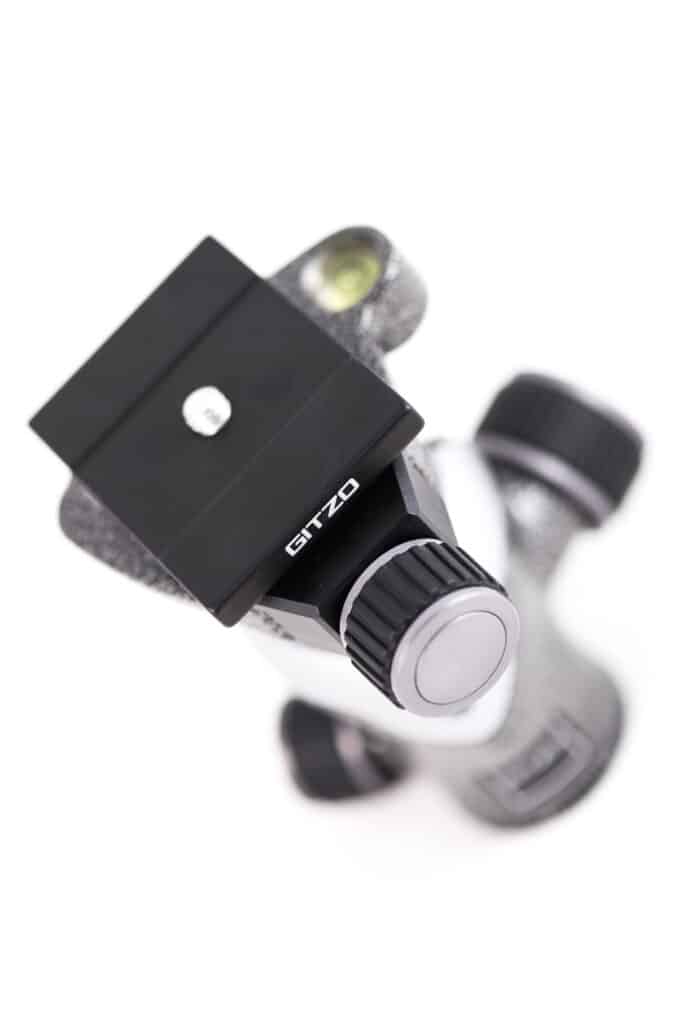 With its slim profile, this head works particularly well with travel tripods that fold back on themselves. Not coincidentally, it works especially well with the Gitzo Traveler and Mountaineer series–it is, after all, designed first and foremost for the Series 0 and Series 1 Traveler series legs. With its narrow base, it lets the legs fold back as far as they can go. (It will, of course, work on other legs too.)

The knobs are unusually grippy and easy to use and tighten. 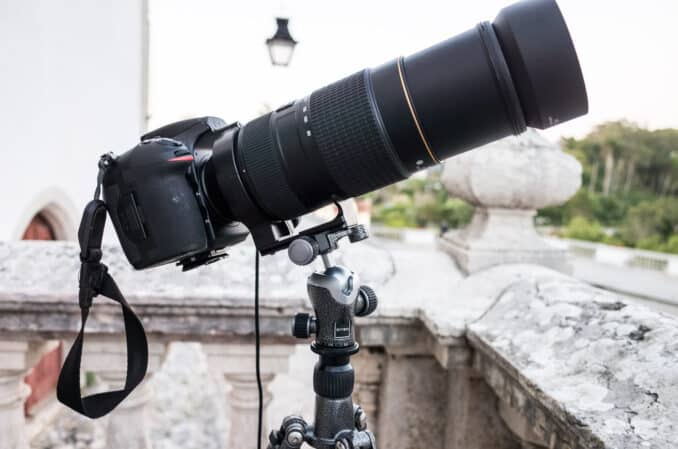 Gitzo touts the smoothness of the ball as one of the innovations of these new models. In the words of their marketing department:

Tungsten disulphide (WS2) is one of the smoothest materials known to science. The coating minimizes the irritating “stick-slip” (jerky movement) effect. The extremely efficient locking mechanism (patent pending) and the use of hard metal components under and around this smooth ball surface achieve movement with comfortable friction, strong locking with minimum effort and compact head sizes.

It is smooth, and I found that their claims of reducing the jerkiness of movement to be well-founded, even if it’s not eliminated entirely.

But I also found the main ball locking mechanism to be a bit too sudden for my liking. It locks well, but if you try to loosen it a little to move the position of the camera, it suddenly loosens quite a lot. It’s more pronounced with a heavier camera and lens combination. 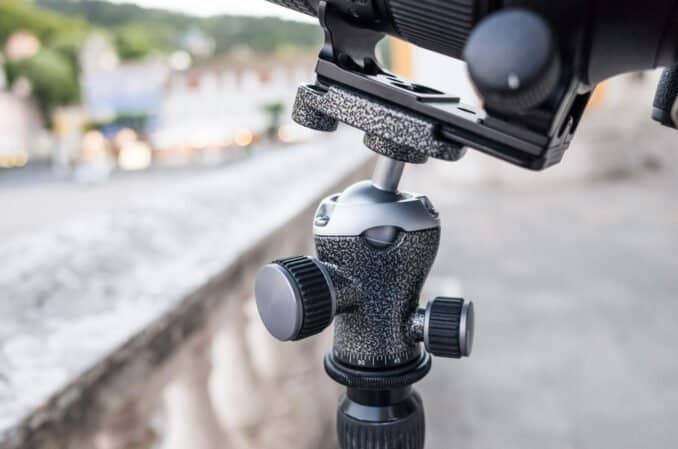 That meant a bit more fidgeting and effort to get it into the position I wanted it than with something like the Arca Swiss Monoball p0, for example, that uses a very different mechanism that provides much smoother tension transitions. But I also don’t want to make too much of this. It’s not something I would consider a problem, as such–just that it’s not perfect, and there are heads available that are better at it. And it is most likely something distinctive to this specific model in the series. The other two models include a friction control dial that, at least on paper, should solve this issue (stay tuned for my hands-on reviews of those models).

Aside from the head itself, there’s a quick-release plate and a fabric pouch, as well as a couple of Allen keys for taking the ballhead apart.

Gitzo has long made top-shelf tripods and heads, and this one is no exception. It’s precisely machined and rock solid. If you’re looking to use heavier, larger camera/lens combinations, it’s probably worth upgrading to the next model up, the GH1382QD, for two reasons: the extra load capacity and the friction control.

But if you’re looking for a small, light tripod head that features top-of-the-line performance, this is a very good option. And that’s especially if you’re pairing it with some Gitzo legs in their Series 0 or Series 1 Traveler series.