While there aren’t a lot of options for external batteries for the GoPro HERO6 Black and HERO5 Black, there are some. Here are the best options I’ve come across for powering your GoPro for more than a couple of hours at a time. 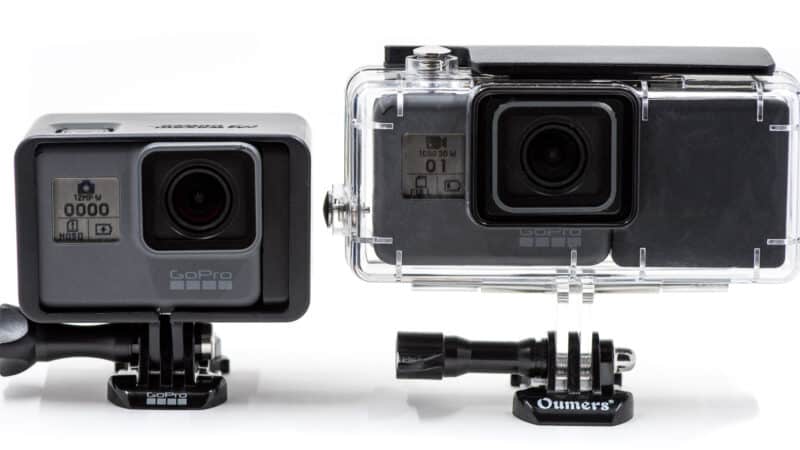 Battery life is not a strength of GoPros (or of GoPro competitors, for that matter). If you get two hours of shooting time out of one you’re doing well. Most of the time you’ll get significantly less, with some shooting modes and features eating into battery life more than others.

So if you’re wanting to get more than an hour or two of shooting and don’t want to be juggling spare batteries all the time, you might be interested in the options for extended battery life with these cameras.

Many of the older GoPro models had a port on the back panel that could be used to attach a GoPro BacPac extended battery to the back of the camera. That port is not on the newer models like the HERO7 cameras or the HERO6 Black and HERO5 Black, so the BacPac batteries are no longer an option.

Nor is it an option to use the internal battery space. That’s a small space, and there’s only so much juice the current lithium battery technology can cram into a space that size. The standard GoPro internal battery is rated for 1220mAh.

There aren’t a whole lot of options for extended batteries that are compatible with the HERO7 Black, HERO6 Black, and HERO5 Black, but there are some. All of the current range are external batteries that supply the charge through the camera’s USB-C port on the side. That means removing the side door, which in turn means that the camera itself is no longer waterproof. Some of the options overcome that by including a waterproof housing that goes over the whole thing; some don’t.

Of course, you can just plug in any old USB powerbank and use that as an extended battery, and that’s one of the options listed below. But that’s not always a practical solution for various reasons.

So there are some other options worth considering. Which works best depends on how you want to use it. Do you need it to be waterproof, for example? Or do you need it to remain minimalist in size? Some of the options have strengths and weaknesses when it comes to considerations like those.

This is my current pick from the current crop of external batteries for GoPros. It has a few things going for it: it’s waterproof, it has a good-sized battery (5000mAh), and although its still adds quite a bit of bulk and weight compared to the camera by itself, it’s still a relatively compact and manageable option compared to some of the other options here. I’ve posted a detailed review separately.

It’s a battery embedded into a frame mount. A swinging arms over the top locks the whole thing securely in place. And it comes with both a standard GoPro attachment point or a standard tripod mount. It manages to be waterproof without encasing the whole thing in a separate housing, and the design gives you access to the camera’s own buttons and touchscreen as normal. While I haven’t gotten quite the shooting times the company claims, I’ve gotten close, and it’s a lot more than the in-camera battery.

This was one of the first extended batteries be released for the GoPro HERO5 Black. It’s also compatible with the HERO6 Black. Wasabi have made quite a name for them over the past several years as a maker of high-quality but cost-effective third-party batteries and power supplies.

The battery is rated for 2500mAh and it comes with a frame mount to hold it securely in place. I have a hands-on review of the Wasabi Extended Battery here. For now, it’s not an option if you need something waterproof because they’ve not yet released a waterproof housing that’s compatible. Another important consideration is that it completely obscures the camera’s back screen.

You can find them at Amazon. I bought mine from Blue Nook, but that seems to have been folded into the main Wasabi Power website.

This battery sits alongside the camera. The camera and battery combination then goes inside a waterproof housing. You can find them at Amazon.

The battery is rated for a capacity of 2300mAh (nearly double of the standard internal battery). It has an integrated USB-C plug, so there’s no need for a separate cable to connect to the camera–it just plugs right into the side. The dedicated housing that comes with it is what holds the two pieces securely together.

The result is simple to use, although the side-by-side layout makes the whole thing significantly larger and bulkier, which isn’t going to be ideal for every mounting situation. But if you need a waterproof extended battery, it’s about the only practical option for now.

You’re not alone if you haven’t heard of this brand–I hadn’t either. But I bought one to try out, and it has been working as advertised for me. I’ve posted a detailed review of the Oumers Side Power here.

This battery takes a different approach. Rather than being something that attaches snugly to the camera, it’s an external 5300mAh battery that’s shaped as a hand grip. So it’s a combination of a battery and grip. The biggest downside is that it’s not waterproof. 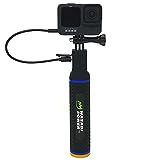 You can also just plug in any old USB powerbank as well. Just make sure to use a cable that has a USB-C plug to go into the camera.

This approach adds maximum flexibility in many respects. If you want to add a battery that has over 20 times the capacity of the standard GoPro battery and get many hours of shooting, you can. But it also adds some complexity, at least in terms of creating a secure, portable package. And it’s not waterproof on its own without some creative DIYing for a housing or an off-the-shelf option.

It is also possible to power the camera only with an external battery. Here’s more on that.

Images and product information from Amazon PA-API were last updated on 2022-12-06 at 12:38. Product prices and availability are accurate as of the date/time indicated and are subject to change. Any price and availability information displayed on Amazon Site at the time of purchase will apply to the purchase of this product.