They look identical from the outside. And the similarity of their model names is unnecessarily confusing. But once you dig into the features and price, there are some significant differences. Here’s how the GoPro HERO5 Session and GoPro HERO Session compare. 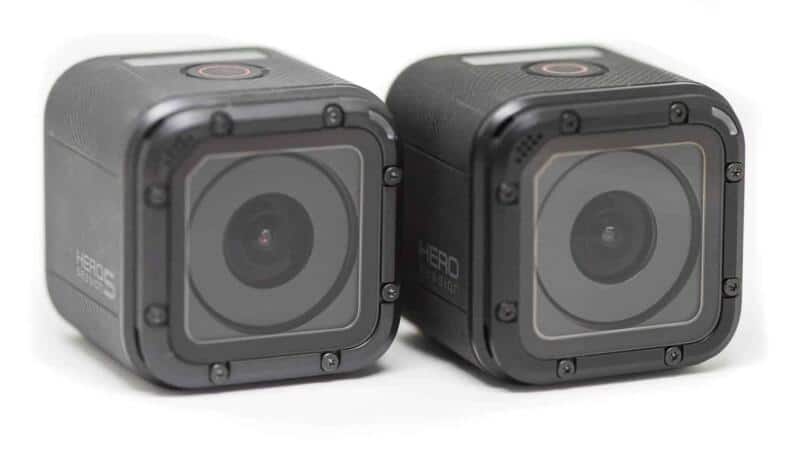 They look identical from the outside. And the similarity of their model names is unnecessarily confusing. But once you dig into the features and price, there are some significant differences between the GoPro HERO5 Session and GoPro Session. Here’s a detailed breakdown of how they compare.

Firstly, it’s worth clarifying this upfront: although they look the same, the GoPro HERO5 Session and GoPro HERO Session are two different cameras.

Both are current models; the old version was the HERO4 Session. (UPDATE: These models have since been replaced by several newer cameras, but the basic point remains that these two models were current at the same time–it wasn’t a case of one superseding another.) Yes, it’s unnecessarily confusing. The very short version of how they differ is that the HERO5 Session has more features and is more expensive than the HERO Session. The HERO Session is the basic, entry-level model.

Secondly, it’s also worth reviewing where these two models fit in GoPro’s lineup, because that has a direct bearing on how they compare. As you can see right off the bat, they’re both small cubes. Well, actually, they’re not perfect cubes–one dimension is just a shade shorter than it should be for a perfect cube, but you get the idea. They look quite different to the traditional GoPro shape.

GoPro first used this cube shape with the HERO4 Session, a camera was launched in July 2015, about nine months after the other two models in the HERO4 range, the HERO4 Black and HERO4 Silver. (Actually, Polaroid was first with their Cube). Despite being about half the size and weight of the Black and Silver, the HERO4 Session was a flop–it was overpriced and competed too directly with other cameras already in GoPro’s range. But the HERO4 Session gave GoPro the opportunity to branch out into the smaller form factor.

The HERO5 Session, though, is a more powerful and feature-packed camera and falls between the HERO Session and HERO5 Black as the middle camera in GoPro’s current range.

I’ve found the battery life to be essentially the same. It’s pretty much impossible to give a definitive figure when it comes to battery life because there are a number of factors that affect it. Things like leaving wifi and Bluetooth on, the resolution and framerate settings, using stabilization or GPS, and even the outside temperature (lithium batteries don’t perform well in very cold temperatures).

But as a general idea, I’ve run them side-by-side a few times in 1080p60 video mode without any other options on (that is, Protune, GPS, wifi, etc, all off) and they’ve been getting in the 1 hr 45 mins to 1 hr 47 mins range. If you turn on any of the other features you’re likely to get less than that.

But the gist is that I’ve not found that one has an advantage over the other in terms of battery life.

And it bears repeating that the batteries in these models aren’t removable–they’re hardwired into the camera.

For all intents and purposes, they’re identical in terms of housing, ruggedness, and handling. Branding aside, there are only minute differences that make no functional difference, like a slightly different shade of black plastic and that the HERO5 Session has an every-so-slightly larger button on the back.

Both models are the same dimensions and have the same built-in rugged protection. They’re rated to be waterproof down to 33 feet (10 meters) without a separate housing.

They both fit in the same frame. You’ll need the frame if you want to mount your camera somewhere, because by itself the camera has no way to attach to anything else.

They also have the same controls and most the same interface, with a large shutter button on top, a small power/wifi button on the back, and a very small monochrome text display screen on top. There are some minor differences between the text displays on top–the new version is slightly tweaked and has some refreshed icons, but they’re not much different. Neither of them has the kind of LCD screen that the HERO5 Black or HERO4 Silver have where you can see what the camera sees. If you want to frame your shot with any precision you’ll have to use the live view through the mobile app.

By not having a back screen, having only two buttons, and having only a tiny two-line text display panel on top, the options for controlling the camera are pretty limited. GoPro’s marketing department prefers to emphasize the simplicity of it–just push a button and go–but if you’re looking to change settings or modes or it can get pretty tedious quickly. And you can’t do things like formatting the memory card in camera.

Thankfully, you can also control both cameras with GoPro’s Capture app via wifi and Bluetooth. That’s a much easier way to change a lot of settings at once. You can also use GoPro’s Smart Remote.

Overall, the HERO5 Session has far more options when it comes to video. It offers a number of features the HERO Session doesn’t. They include:

I have more details on GoPro stabilization here.

Video Modes Compared. The HERO5 Session also offers a wider selection of resolutions and framerates. They include 4K video, which the HERO Session doesn’t have.

Here’s a master list of the video modes each camera offers. There’s one minor difference in the way that the cameras describe their video modes. While the HERO5 models have SuperView and Wide fields of view, the Session refers to Super View and Ultra Wide. In the table below I’m treating the Wide and Ultra Wide FOVs as the same thing.

The HERO Session shoots photos at a resolution of 8 MP. The images measure 3264 by 2448 pixels. It also shoots a cropped mode with a Medium field of view with 5 MP photos.

Here’s how those sizes compare, along with the 12 MP images generated by the GoPro HERO5 Black.

Night Mode. This mode keeps the shutter open longer to allow more light to come in. The HERO5 Session has it; the HERO Session doesn’t.

GoPros have two methods of shooting timelapse (though not all of their cameras offer both methods, as in this case). One is the traditional method or shooting a series of still photos at intervals that you can then compile together into a video using software on your computer. It’s known as Timelapse Photo.

The other is known as Timelapse Video. Timelapse Video is far more convenient because you get a compiled video straight out of the camera, but Timelapse Photo gives you more control over the processing of anything from colors and contrast to resolution to framerate.

The HERO5 Session has the Timelapse Video modes. It offers the same intervals as the timelapse photo method. The video resolutions you can use are 4K, 2.7K4:3, and 1080p.

Night Lapse Photo. This is a special mode that keeps the shutter open longer to let more light in and can adjust the interval accordingly to make it continuous. The HERO5 Session has this mode; the HERO Session doesn’t have it.

USB. Both use USB connections for charging and data transfer. That means they can be charged with regular USB chargers and external batteries as well as connected to computers by a cable. One thing to note, though, if you’re planning to use external power, is that to access the connection you need to open the latch door, and with the door open the camera isn’t waterproof.

While they both use USB, they use different cables. The HERO5 session uses the newer USB-C format connector. That opens the possibility of it being able to be charged more quickly with GoPro’s Supercharger. (Note that while USB-C is often used for USB 3.0 data transfer, the USB-C connection in the HERO5 cameras is still limited to USB 2 speeds.)

The HERO Session uses the older micro-USB connector for charging and data transfer.

HDMI. Neither of these has HDMI output. The HERO5 Black does.

Wireless. Both cameras offer wifi and Bluetooth connectivity that can be used for remote control via the mobile app Capture or with the Smart Remote.

GPS. Neither of these cameras has GPS functionality. For now, that’s limited to the HERO5 Black.

Batteries. The batteries for both models are hardwired internally and can’t be replaced.

Voice Controls. This is something specific to the HERO5 models; the HERO Session doesn’t have it. Voice control lets you issue basic control commands verbally, such as “start recording” or “take photo.” It can be a little buggy, and there are a lot of situations you might not want to use it, but both HERO5 models have it.

Both cameras are compatible with microSDHC and microSDXC cards. That means that both support cards ranging from 16GB to 256GB and above.

The HERO5 Session supports 4K video capture, so it has higher demands of the memory card’s write speeds. You don’t necessarily need the fastest microSD card, but you do need one that’s fast enough. I have a separate post on recommendations for memory cards for the HERO5 Session and HERO5 Black.

Because the HERO Session doesn’t record 4K video, it isn’t quite as demanding on the speed of the memory card. Most of the current crop of microSD cards–especially those from well-known brands and sourced from reputable retailers–will work just fine. If in doubt, the SanDisk Extreme is a good choice.

After some initial hiccups with production delays on GoPro’s end, both of these models are now widely available at places like Amazon and B&H Photo.

UPDATE: Both of these models have been superseded by several newer generations of GoPro cameras and are now difficult to find in stores.