The Induro Baby Grand Tripods aren’t your typical travel tripods. Truth be told, they’re not really travel tripods at all. But if you can settle for something very short, they’re extremely solid and portable. 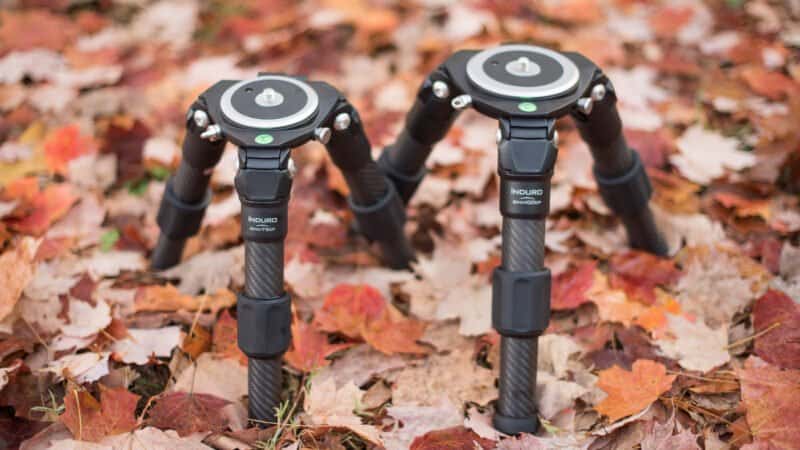 These aren’t your typical travel tripods. And, in reality, they’re not really designed as travel tripods at all. Hi-hats are a particular type of tripod that are small and allow for a very low vantage point in tight spaces. They’re most often used for video, which is why they have such a broad platform (or bowl) to accommodate larger fluid heads used in video filming.

But they can also make for an unconventional but very useful option as a travel tripod for photographers. They’re small and sturdy and easily packable. So it’s with that kind of use in mind that I’ve recently been trying out the Induro Stealth Carbon Fiber Hi-Hats (thanks to B&H Photo).

These two from Induro are both carbon fiber models. They’re very similar. Basically, one is a little broader and stronger than the other. They’re very sturdy tripods but are extremely vertically challenged. They only reach a maximum height of less than a foot.

Induro claims that their hi-hats are 60 percent stronger overall than conventional carbon fiber tripods, although I’m not sure exactly how they’re calculating that figure. Regardless, it’s pretty evident when you pick these up that they’re sturdy pieces of kit. What they aren’t is tall.

These tripods are both very similar and operate in the same way. The have a single, short extension for each leg. It uses a twist lock that is strong and easy to lock tight.

The legs can be splayed at different angles for different stances. The locking mechanism is a manual ratchet.

The ratcheted angle locks are fully manual, meaning that you have to push them in to make them lock.

The feet are removable, so you can replace them with steel spikes or larger rubber feet (a set of each is included) or use a standard bolt to attach to some other DIY platform solution.

There’s a hook underneath that is unusually large and sturdy but makes for an uncommonly strong way to stabilize the tripod. You could, in theory, is it to add free-hanging weight, as you might with a taller tripod, but a more practical use is to tie it down using a strap (where the flat hook comes in handy) for an even more secure attachment.

The platform sizes are different–one is 75mm across while the other is 100mm across–but work in the same way. The whole base can rotate freely or lock in place–there’s a locking knob on the side. And there’s a bubble level on each. They use a standard 3/8 inch 16 UNC thread (the larger of the sizes you usually run into with tripods, often used for attaching a head to a tripod).

They’re very similar, as you can see.

I’m particularly impressed with the things that come with it. With many tripods, these are things you would normally have to buy as optional extras.

Both models come with the same accessories in the box. They include:

The Induro Stealth Carbon Fiber Hi-Hats are very sturdy and compact. They’re solidly made yet surprisingly light and portable. When you put these in place for shooting, you really don’t have to worry about them moving or any wobble–they’re rock solid and easy to use. And props to Induro for including the extra accessories that they could easily have sold as optional extras. Overall, I’m impressed.

I’m generally hesitant to criticize products for not being something else, because it’s often an unfair basis for judgment. But in this case, I couldn’t help wishing there was one more option.

My only disappointment with these is that they’re not even more compact. These both have quite a broad top, which is excellent for stability, especially with video, but which is broader than I personally need for a lot of my shooting. I’d love to have another model in the range that is fundamentally the same idea but scaled just a bit smaller and lighter and is even more packable–maybe a 50mm version. That’s something I could see myself packing for travel photography in a heartbeat.

In fact, something like that does already exist–the Ground Pod from Really Right Stuff–but it’s priced much higher, at about half as much again. But it does make for a good alternative that’s well worth a look.

If you’re looking to use these with photography, the smaller of these two will likely be a better fit. The larger platform is really only crucial for larger video cameras and their fluid heads. There aren’t too many stills cameras rigs where I can imagine that the smaller 75mm platform wouldn’t be more than adequate.

You can find the Induro Stealth Carbon Fiber Hi-Hats at B&H Photo: