The Really Right Stuff TVC-32G Ground Pod might be short, but don’t let that fool you. It’s an unusually strong and stable shooting platform when using large lenses or heavy gear. 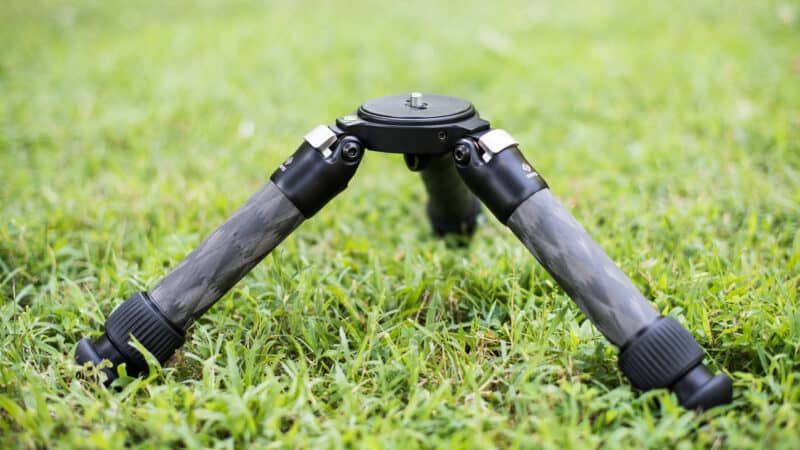 In my ongoing search for the best travel tripods, I’m often intrigued by tabletop tripods. That’s not strictly a class of tripods, but they share something in common: they’re short. They’re designed for either shooting low to the ground or for putting it on top of something else.

Beyond that, there are huge differences. Tripods that might fall in that category run the gamut from small and flimsy and fitting in your pocket to super-solid shooting platforms for heavy rigs.

This one is firmly at the strong and stable end of the range.

With a maximum height of under 14 inches, it’s basically shin height. So it’s good either for low-perspective shooting or for standing it on top of something else (like a table top). I recently borrowed one from B&H to take a hands-on look at it.

Its carbon fiber legs are in two sections. By default, it’s sold as legs-only, without a head.

As usual with Really Right Stuff gear, it’s beautifully crafted with a lot of attention to detail, and every piece of it is made in the United States. RRS gear unapologetically aims at the premium end of the market, and that’s often reflected in the price. With an MSRP of $475 for the standard version (more if you choose added options), it’s certainly not cheap, but it’s in the same ballpark as its nearest competitor.

The legs are in two sections. The bottom sections extend, but they don’t extend very far. Even fully extended, the height maxes out at under 14 inches.

The extensions lock in place with solid twist locks. The angle of each leg can be set independently, with spring-loaded ratchet locks at the top.

On top is a bubble level.

The base that a head fits on is unusually broad and takes large tripod heads comfortably.

Under the base is a small hook that can be used to hang ballast for added stability or if you need to batten down the hatches.

It comes with rubber feet. They’re removable, so you can replace them steel spikes (available separately) or other feet or mounting points if you like.

As a Travel Tripod

The TVC-32G isn’t strictly a travel tripod in the usual sense, but it can certainly be used as one. And at first glance, it certainly looks very promising with respect to saving space in your carry-on. When I first saw it, I was excited at the prospect of it taking up only a tiny space in my bag.

But when you look at it in person you find that what it reduces in length it adds in girth. When I first went to pack it, I found that I had to rearrange the configuration of my case’s dividers to make it fit.

That’s because of the very broad shoulders at the top. It ends up being a different shape in your bag to a regular travel tripod, but it doesn’t necessarily end up saving any space overall. It’s still small, mind you–just not as compact as I originally imagined.

Here’s an example of what I mean, with it side-by-side with the RRS TFC-14 travel tripod:

But, of course, you’re ending up with a much stronger platform than most travel tripods, so there is that. If you do take it with you traveling, it can easily handle large telephoto lenses or medium-format cameras and is also a very good platform for the heavier rigs involved in shooting video. Because of its low stature, it’s also an attractive option for macro photography either in the field or studio.

The closest competitor that comes to mind is the Induro Baby Grand. They’re similar sizes and weights, although the Induro has a rated load capacity of three times the RRS (165 pounds vs. 50 pounds).

Another similar option is the Varavon Baby T3 mini tripod, although the RRS, in turn, has a much higher load capacity than the Varavon (50 pounds vs. 17.6 pounds).

There’s the tripod and . . . well, that’s about it, at least in the standard package. You can also order it with various options, such as with or without a leveling base, as well as different handles and platform types.

But there’s no case or attachments included such as steel spikes, so you’ll need to pick those up separately if you want them.

Because it uses a standard 3/8-16 stud, it will work with just about any tripod head. If you want to pair it with one from RRS, their venerable BH-55 ballhead would be a good choice.

For the longest time, you could only buy Really Right Stuff gear directly from the manufacturer. You can still get their gear directly, but you can also now get them at B&H Photo.

UPDATE: Since I first posted this, the original model has been replaced with an Mk2 version. You can find them at B&H Photo and Really Right Stuff.