How to Capture Still Image From Video on Mac

Here are three quick and free options for taking a still from a video on Mac. 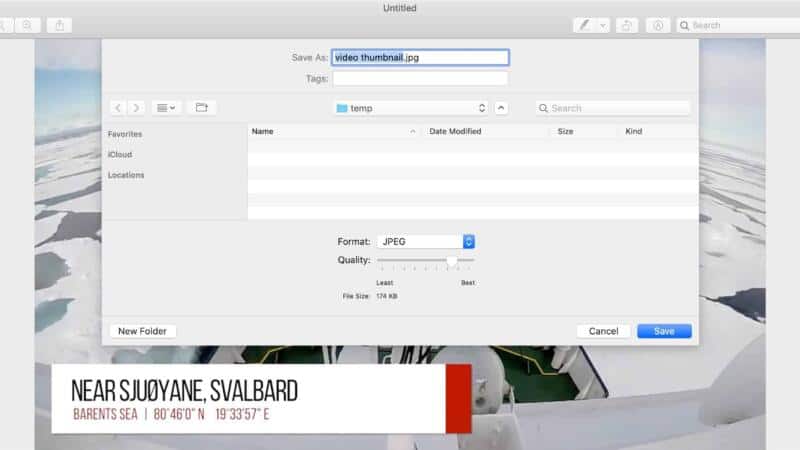 There are times that you need to take a single still image from a video. There is any number of reasons you might want to do that. You might want to use a frame in a photo book or other format that only supports still images. One of the most common reasons is to use it as a video thumbnail on YouTube or on Vimeo. Once you’ve exported the still image, you can edit it or add text and graphics in any way you’d normally edit an image file.

There are a number of different ways to take a still from a video on Mac. Most video editing software has the capability, and I’ve previously posted a guide to doing it with Adobe Premiere Pro.

But if you don’t want to fire up your video editing software, there are also other quick and free options. So here are a few quick ways to take a still from a video on a Mac. All of these use free software or tools built right into macOS.

I’ll start with using QuickTime, followed by VLC, and finish up with using the built-in screenshot tool.

How to Capture a Still Image from Video with QuickTime

Open the video in QuickTime Player and go to the frame you want to grab. Pause the playhead there.

You then want to save a copy of the frame to the clipboard by pressing CMD + C.

Open Preview (Applications > Preview, from Spotlight, a launcher like Alfred, or from your Dock.

From the top menu, go to File > New from Clipboard or use the shortcut CMD + N. The image will now display in a new window.

You can now save it as a still image. Most of the time, you’ll probably want to save it as a JPG or maybe a PNG, but the full range of options are JPG/JPEG, JPEG 2000, HEIC, OpenEXR, PDF, PNG, and TIFF. For some, such as JPG, you get the option of controlling how much compression to apply (more compression makes smaller files but can negatively impact image quality).

You now have the still image saved, and you can open it in any image editing app to apply text or graphics or other edits if you wish.

An older (and in many ways more powerful) version, Quicktime 7 Pro, had a built-in “Movie to Picture” function that performed the task of taking a still from a video. But QuickTime 7 Pro will not work in macOS Catalina and subsequent versions.

If you’re using an older macOS and still have Quicktime 7 Pro installed, you can take a still by going to File > Export > Movie to Picture. You can choose your saving and image file format options and save the file directly.

How to Take a Still from a Video with VLC

Another option is to use VLC, a free, cross-platform, and very capable video and music player app. I’ve put together a more detailed guide to saving stills from video using VLC, but here’s the quick version:

Open the video file in VLC and move the playhead to the frame you want to use. Pause playback at that point.

From the top menu, go to Video > Snapshot (or right-click on the video screen and choose Snapshot, or use the keyboard shortcut CMD + ALT + S).

A thumbnail of the captured frame will appear in the top right of the video screen.

If you want control of the image format and where it’s saved, you can set those in Preferences > Video > Video Snapshots.

A third option is to use a simple screenshot function that’s built into macOS in combination with a video playback app such as QuickTime Player.

Open the video file in QuickTime Player. Put the screen into fullscreen mode by going to View > Enter Full Screen (or using the keyboard shortcut CTRL + CMD + F). This makes it easier to avoid title bars and playback controls being visible and needing to be cropped out.

Then press CMD + SHIFT + 4 to go into screenshot mode. Press the spacebar until the window turns a pale blue, and the cursor becomes a small camera icon. Press Return to take the shot. The file will save automatically to the location of your screenshots (by default, they go to the Desktop, but you can change that in macOS preferences.

There are also plenty of more specialized screenshot apps available, and they will also work well for this and might give you more direct control over the naming and image format of the file being saved.

How to Capture Still Image From Video on Mac