Unlike the days of film, airport scanners have no affect on memory cards, so you can safely put them through airport security scanners without holding up the line. 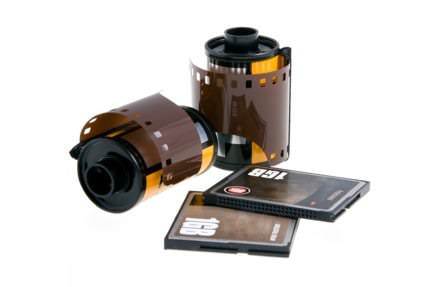 Film and airport security X-rays were always a very bad mix. Film reacts to light and radiation, and it does’t take long for an X-ray machine to completely wipe a roll of undeveloped film. Understandably, and quite rightly, most photographers became rather paranoid about airport scanners. But the good news is that memory cards are much more immune to airport security scanners.

With film, many security checkpoints used to do hand checks if you asked, although I got my fair share of scowls when I asked them to hand check a zip-lock bag with a couple of dozen rolls of film. And while I usually used clear film canisters, they didn’t seem to make the slightest difference in speeding things up. Manufacturers of the X-ray machines claim that any film rated under 800 ISO won’t be affected, but I’ve had enough experiences to the contrary that if I’m traveling with film I get all of it hand checked regardless of speed rating. You can even get lead-lined film pouches, but I found the results mixed at best. Since airport security folks don’t like bags they can’t see in, it just seemed to encourage them to crank up the volume on the X-rays, negating any benefit of the pouches. And besides, they’re deliberately heavy. So I gave up on them pretty quickly.

The good news, though, is that it’s no longer something you have to worry about with digital camera memory cards. Some photographers like to put the memory cards in their pocket and take them through the personnel scanner on their person rather than trust the conveyor belt scanner. If that gives you peace of mind, by all means do it. But there’s no actual reason to do so. And with backscatter scanners becoming increasingly widespread, chances are that the best you’re going to accomplish with this strategy is slowing the security line down and annoying the security personnel when they have to ask you to remove the cards and go through the scanner again.

Flash memory cards are remarkably resilient (and can sometimes survive a long swim in the ocean). There have been extensive tests done by multiple organizations and manufacturers that confirm that airport security scanners do not affect memory cards. If you want to wade through the details, head over to the International Imaging Industry Association’s detailed reports (the International Imaging Industry Association has long since disbanded, but its reports live on (for now, at least) at the Internet Archive).

And it makes perfect sense, if you think about it. You can imagine the uproar if airport scanners started wiping laptop hard drives, and the magnetic media in most of those is much more sensitive than the solid-state storage of a memory card. Same goes for smart phones–imagine if they all started getting wiped every time you went through airport security.

So by all means, take extra precautions with your memory cards through airport security if you like, but after many, many scans I’ve never had the slightest hint that the scanner affects my memory cards or hard drives. And there’s science to back it up.

So that’s one thing less to worry about when you’re flying!