It’s a baseplate with tripod studs and a few screws. But this tiny package is a surprisingly flexible way to mount a camera. 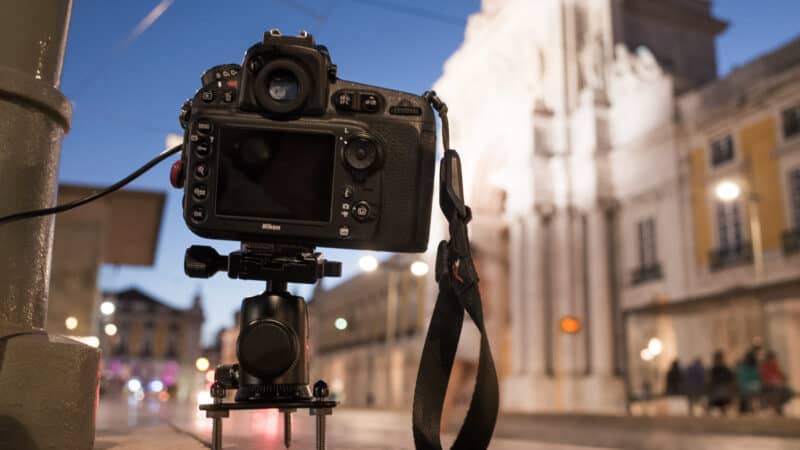 The idea behind the Platypod Pro is pretty simple, really. It’s a metal baseplate with some holes drilled into it and a couple of tripod studs fused into it. But the elegance of the system is that the simplicity actually opens all sorts of flexibility.

Since I originally posted this review, the Platypod Pro has been discontinued. The most direct replacement for it is the Platypod Ultra, which adds a number of refinements. There is also the larger Platypod Max, which is designed for larger cameras.

Platypod Max The Flat Tripod Base for Low Angles and Tight Spaces That...
Check Current Price & Availability at Amazon

If you need to bolt the plate to a wall or some kind of platform, you can. And if you want to use it as a mini-tripod, you can. Attach a tripod head or put the camera directly on it. They all work, and the usage scenarios are endless.

The baseplate is simple. The bottom is completely flat, so you can mount it flush against another flat surface. Four holes are pre-cut to make that easier.

The things that set it apart from just being a plate of metal with holes in it are the two tripod studs that are fused into the plate. They provide solid anchor points for things like tripod heads or cameras, and there’s no protrusion on the underside.

The “legs” are entirely optional. If you want to simply lay the plate on the ground, you can. But you can also use the three screw spikes as a kind of mini-tripod. The corresponding holes are threaded, so you can adjust their height. And the screws are reversible, so you can use them as sharp metal spikes for grip or use the ends with the plastic covers if you don’t want to scratch the surface of whatever you’re putting it on.

It is possible to mount a camera on it directly, but I’ve found it far more useful with a small travel tripod head. In this example, I’m using an Arca Swiss Monoball p0 ballhead, but a more logical and cost-effective option when using with a DSLR or mirrorless camera is something like the Oben BE-117.

It’s available in different configurations. In the Deluxe Kit, which is what I use, it comes with the spikes and a nifty case that be used either flat or converted to a boxier case that you can also put your ball head in.

It has a nominal load capacity of 90 pounds, but in practice, it’s going to be highly dependent on balancing the center of gravity safely. And chances are that any tripod head you put on it will have a load capacity well below that.

The case that comes in the Deluxe Kit is 5 ounces by itself (142 grams).

I’ve found the Platypod Pro to work great with mirrorless and small cameras. It works quite well with DSLRs, but it’s not as stable as I’d prefer when using with a large DSLR like a Nikon D810, especially with the risk of it tilting sideways. And I don’t, and wouldn’t, use it with longer, heavier lenses where the center of gravity is shifted.

But the folks behind Platypod have created a bigger version, the Platypod Pro Max.

I don’t necessarily consider the Platypod Pro as a replacement for a tripod (and it’s not pitched as one by the manufacturer). There are situations where it just doesn’t give you the options that a good travel tripod does. But there are also a lot of situations where a tripod is less than ideal but that the Platypod excels.

There are many studio or other permanent mounting situations where it can be handy to be able to bolt a baseplate directly onto something else. And the Platypod Pro is very good for that. But I’m focusing here on using it as a portable solution for travel photography.

And there are many positives to using it for that. It’s small, light, and discreet, and a lot easier to carry around than a tripod. There’s not much to break or fail even with the harshest treatment while traveling. And it can stand on all sorts of surfaces, both flat and uneven, from dirt, to cobblestones, to wooden fences. But there are also a few cons. Until the Max comes out, with its larger footprint providing more stability, the Platypod Pro can tip over sideways if you’re not careful when using a heavier DSLR, especially with the added height leverage when using a tripod head. And as simple as the screw/spikes are to use, they can also be a little tedious to attach and remove when on the go.

But overall, it can be a very useful tool to have in your camera bag. And it hardly takes up any space at all.

The Platypod Pro is no longer available, but two newer models are

The most direct replacement for this model is the Platypod Ultra, which is similar but adds a number of refinements.

Platypod Max The Flat Tripod Base for Low Angles and Tight Spaces That...
Check Current Price & Availability at Amazon