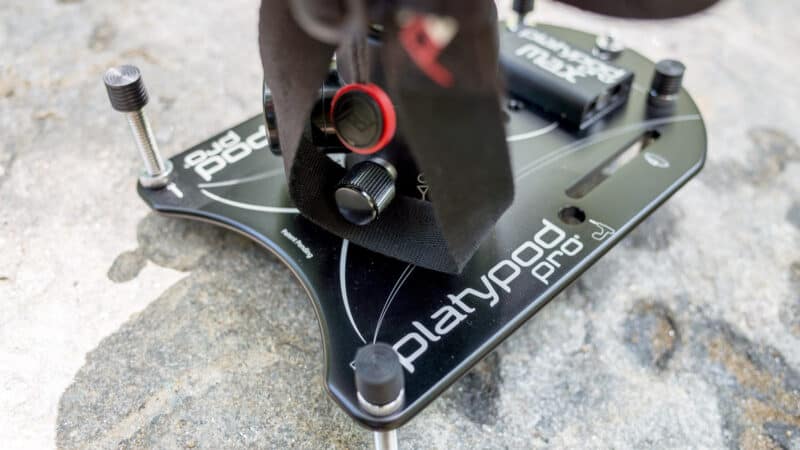 The concept behind Platypod Pro is pretty simple. It’s a metal baseplate designed to provide a stable mounting platform for cameras. It’s not really a replacement for a travel tripod, although there are many situations where it can work as well or better. But being so small, light, and portable, it’s also something you can easily take along with a tripod as well.

On the surface, it sounds a bit like something that could be accomplished as a DIY project. And I’ve built platforms that are conceptually similar before, especially for timelapse projects. But there are two key things that raise the Platypod Pro models above a simple DIY project.

One is that it comes with a 3/8″-16 stud to attach a tripod head. Crucially, the stud is fused into the baseplate, so none of it protrudes through the plate. That means that the underside of the plate is completely flush, which is important for stability if you’re mounting it on a flat surface.

The other is that it comes with threaded screw “feet” that can be adjusted individually. The holes for them are also threaded, making it a much more convenient and secure way to adjust the height than having an unthreaded hole.

And there are a few other small, nice touches that I’ll get to below.

Platypod have since come out with a new model, the PlatyPod Ultra. It’s smaller than the Max, but it has some useful refinements that add to its flexibility.

There are now two models of Platypod Pro. The original has been around for quite a while now, and I reviewed it not long ago.

One of the defining features of the Platypods is their versatility. They can be bolted to a wall or ceiling or skateboard or moving platform to provide a rock-solid base for mounting. They can be used standalone simply as a flat platform. And they can be used with all sorts of different cameras, from GoPro action cams to mirrorless cameras to DSLRs.

One of the issues I’ve found with the original model is that it has a tendency to become unstable if you use it with a DSLR and ball head combination. It’s not really a complaint, per se–it’s just a design limit of the combination of a small, ultra-portable plate and the inescapable physics of gravity. It works great with mirrorless and compact cameras. It can work well with DSLRs, but you have to be much more careful with the heavier cameras.

Now there’s a new model out that addresses that issue directly. It’s a bigger version with a broader baseplate. And it’s called, appropriately enough, the Platypod Pro Max.

It was born as a Kickstarter project, and as one of the early backers, I was one of the first to receive a copy. So I’ve been playing around with it for the past week or so.

There’s a lot that this model has in common with its smaller, older sibling.

Like the original, the Max is fundamentally a base plate with holes in it. It also has a tripod mount slug fused into the plate. And that means that the underside is completely flush, making it ideal for mounting against flat surfaces.

You can, if you like, attach the camera directly to the baseplate. But it’s really designed to work with a tripod head. And it comes with a standard 3/8″-16 stud for doing that.

There are several more holes and slots in the Max that are well-designed for different types of attachments. There are threaded tripod mounting holes. There are two 2-inch slots where you can thread cable ties or steel straps to attach to poles or trees. And there are two holes that can be used for attaching with bolts or screws (they’re 5/16″ unthreaded compatible with #10 wood or metal screws).

These can come in handy, especially for shoots like long-term timelapse where you want a rock-solid, weather-proof method of mounting a camera, whether you’re trying to bolt it to a wall or ceiling or even something like a skateboard, or maybe you want to strap it to a light pole or fence post.

And on the very front is a small, removable 1/4″-20 stud that’s useful for attaching something like a remote transceiver if you’re setting up a remote rig like those banks of cameras you see sitting on the side of the track at the Olympics.

You’ll also notice a small box-like contraption on the front. One of the minor quibbles I had with the original Platypod Pro is with the management of the screw “legs.” It’s a bit tedious putting them in and out. And you can’t really leave them in because it makes the package much less convenient to pack in your bag with the sharp, protruding screws. But if you remove the screws, you’ll inevitably end up digging around for them later.

Size & Portability: The cost of the larger size, of course, comes in slightly less portability. That said, it’s still very portable, coming in about the size of a mini-tablet.

Legs. Both use a system of “legs” that basically consists of screws. They’re entirely removable. One end is spiked, while the other is covered with a plastic cover for a non-scratch option.

Attachment Points: The Max has five threaded holes that can be used for these–four at the corners and one of the tripod-mount holes in the middle–while the original has only three. The screws are the same thread, so you can mix and match if you like, although the ones that come with the Max are half an inch longer. The screws with the Max also come with a slightly different, and better, rubber end that is both more solid and less prone to sliding off when you don’t want it to.

Onboard Storage: And in a nice touch, the Max comes with its own onboard leg storage system for when they’re not in use. Small magnets hold them in place. The attachment is removable, but it solves the problem of having fiddly loose screws bouncing around in your camera bag with a strong risk of getting lost–indeed, I’ve lost some before. So this storage cartridge is a handy little addition.

What It’s Good For

So does the Max work better than the original with larger cameras? Yes, most definitely. I’ve been using it with a Nikon D810 and a variety of lenses. It’s easy to carry and quick to set up, although getting the legs properly adjusted for uneven ground can take a little ground-level tinkering.

Using it as a kind of ultra-portable tripod (as opposed to bolting it to something else), the longer and wider baseplate makes a real difference, and ensuring a finely balanced center of gravity is less critical. But that’s relative, of course. It simply doesn’t have the lateral spread of a tripod, which means that you do have to be careful with the center of gravity. It can–and will–spill if you’re not careful.

The downside, of course, is that a bigger product is slightly less portable. But we’re not talking about a major difference here when you factor in the tripod head, you’ll most likely the carrying with it, and especially if you compare it to lugging around a tripod. It’s flat, so it packs very easily.

And it’s also an especially good option if you need to fix a camera to the wall or a light pole with a rock-solid base. That’s something I’m often in need of with setting cameras up with long-term timelapse captures for clients. This is a much more elegant and polished solution than the home-built rigs I usually use.

Tripod Head. It does not come with a ballhead–at least, not yet. It’s possible that once it becomes more readily available, there might be versions that might come bundled with tripod heads, as there are with the original Platypod Pro, but for now, you’ll need to procure that separately. Just about any tripod head is compatible with it, so what you already have is a good place to start. If you’re looking for small and portable-yet-solid, something like the Oben BE-117 is a good, cost-effective option.

Larger lever-style heads are less suitable because the levers might jam up against the plate if you try to angle the camera up–you simply won’t have as much room to move.

Warranty. It comes with a 5-year warranty. Potential manufacturing defects aside, there’s not a lot that can go wrong with it.

Compare To: For some other products that share similar capabilities, albeit with a more traditional tripod approach, the Really Right Stuff TFA-01 Ultra Pocket ‘Pod and the Kirk TT-1 Mini Tripod are worth looking at too.

I would love for there to be a rubberized “shoe” that fits snugly over the bottom of this to make a non-slip surface. You can sort of get the effect with the rubber ends of the “feet”, but more surface area would provide better grip.

Check the current price and availability of the Platypod Max at:

Images and product information from Amazon PA-API were last updated on 2022-11-25 at 23:30. Product prices and availability are accurate as of the date/time indicated and are subject to change. Any price and availability information displayed on Amazon Site at the time of purchase will apply to the purchase of this product.