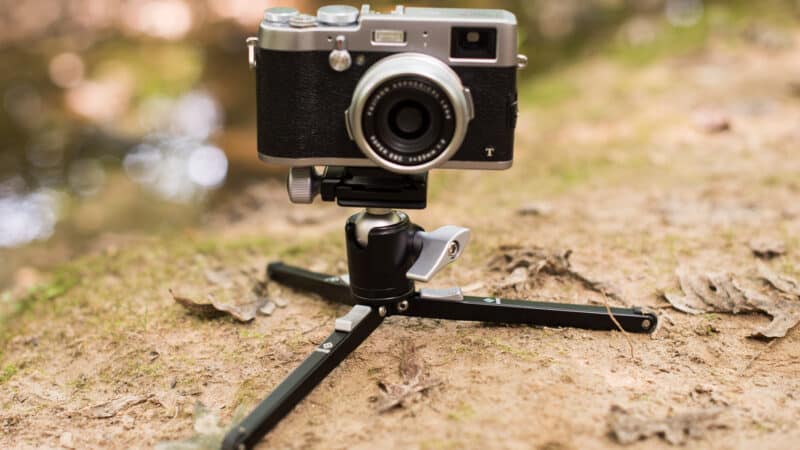 There are a lot of tiny, pocket tripods out there. But most of them can’t hold much weight. Nearly all of them can hold a compact camera or GoPro but struggle with a DSLR or large mirrorless setup. You can step up to a heavier-duty tabletop tripod, but that often adds bulk.

Really Right Stuff has recently come out with some new products designed for travel photography. First came the Multi-Clamp. It’s similar in many respects to the venerable Manfrotto Super Clamp but smaller and lighter. It also allowed for various configurations when paired with other RRS accessories.

They’ve also released their Pocket ‘Pod, a small table-top setup designed for use on the go. And that’s what I’m focusing on here, after having been shooting with it for a while now.

There are two versions of the Pocket ‘Pod legs. The basic version (model TFA-01) splays the legs in a single position. You can also stand it more upright, but because there’s no way to locks the legs in a more upright position the stability will vary by the amount of grip on the surface and the weight of the camera rig you put on it. But it’s also very strong–with the legs fully splayed it has a load capacity of up to 100 pounds.

The one I’ve been interested in and have been using is similar but adds locking mechanisms to each of the legs that allow each leg to be splayed in one of three positions. That allows for a lot of different options. It’s known as the Pocket Pod Ultra (model TFA-01 ULTRA).

These shots include the BH-25 Pro ballhead, which is an optional extra.

The legs fold up neatly when not in use, and it doesn’t take up much space in the camera bag.

The main body parts are made of anodized aluminum, while the internal parts are stainless steel. It’s solidly made, and feels it, but is still extremely portable.

One of the core features of this tripod is that the legs splay and lock in place with a ratcheted lock at the top of each leg. Each leg can be opened to one of three positions.

There are two benefits to that. One is that you can safely use the legs in a more conventional upright tripod stance. That gives you a few inches of extra height, which can be more comfortable at ground level and can be better with wide-angle lenses. It does, though, narrow the base and make the center of gravity more important.

The other benefit is that it’s much more flexible for use on uneven surfaces because you can lock each leg in a different position.

The tripod’s feet are wrapped with a rubber strip that adds grip.

The load capacity with the legs fully splayed is 15 pounds, which is more than enough for most mirrorless and even DSLR setups, even something like a Nikon D810 with a 70-200mm f/2.8 telephotos. Smaller lenses are no problem at all.

But you also have to keep an eye on the center of gravity, especially if you’re using one of the upright positions.

When you splay the legs wide, it covers quite a bit more area, which adds lateral stability (ie. it’s less likely to tip over).

But that’s not going to give you much flexibility in framing the shot. Adding a compact tripod head solves that while adding a little height.

I’ve paired mine with the RRS BH-25 Pro, which makes for a perfect match for me—that’s the one you see in many of the photos I’ve included here. It’s small, strong, beautifully made, and uses an Arca-style quick release.

You could pair it with an even smaller and lighter RRS model, the BC-18 Micro Ball. And RRS offers the Pocket Pods in packages with some of their heads.

That said, the attachment point is pretty narrow, and the whole point of the Pocket Pod is to keep things light and small, so it doesn’t make much sense to use a large, bulky tripod head. A larger, heavier head also risks making the whole combination too top-heavy.

RRS don’t waste money with fancy packaging. It comes in a small, white cardboard mailing tube with a sticker indicating the model number.

You can buy the legs alone or in bundles with some of RRS’s small ballheads.

But it’s also not inexpensive. The legs alone are $120. Heads are in addition to that. The package with the BH-25 Pro ballhead, pictured here, is $255.

So it’s worth considering what the alternatives might be.

Disregarding some of the lightweight pocket tripods that have load capacities of under 10 lbs and aren’t well suited to use with a DSLR, the closest competitor is probably the Kirk TT-1. Both collapse into very small packages, and both mount the camera at about the same height, give or take.

The Kirk model is much stronger, with a load capacity of a massive 100 lbs, but the RRS model is much more flexible because the leg angles are adjustable. The basic RRS Pocket ‘Pod, without the ratcheting locks, is more directly similar to the Kirk.

The Varavon Baby T3 Mini Tripod is another small but strong option, but it is still a lot larger than the Pocket Pods.

Joby’s Gorillapod series is another popular option for ultra-portable supports. The largest in the series, the Focus, has a load capacity of up to 11 pounds. So that’s getting close to the Pocket Pod’s load capacity. You do gain even more flexibility in the legs, but my experience with using DSLRs on Gorillapods is that they simply don’t offer the amount of rigidity I’m after to really hold the camera still. And the price is still in the same ballpark as the RRS Pocket Pods, although that does include the very rudimentary ballhead that comes with them standard.

Another option, which takes quite a different approach, is the new Platypod Pro Max. Both rank very highly in terms of stability and portability, and the prices are comparable. The Platypod Pro Max, though, can handle far higher loads. Here’s my recent review of it.

Really Right Stuff have a reputation for beautifully made gear, and the TFA-01 Ultra Pocket Pod is no exception. All of the parts fit together perfectly with no looseness or give that can lead to movement.

After using the TFA-01 Ultra Pocket Pod for a while now with both DSLRs and mirrorless cameras, I love it. It obviously doesn’t give you the height you get with a regular travel tripod, so you’ll need to be shooting either at ground level or putting it on something else to get some height, but for sheer pack-and-go convenience, it’s hard to beat. It has quickly become a staple of my travel kit. I’ve found it to be a shot saver in a low-light pinch and stable enough for captures with anything from DSLRs to GoPros.

The Pocket ‘Pod is available in several configurations from legs alone to packages with RRS’s smallest, lightest ballhead, the BC-18, and the heavier-duty BH-25 Pro.

Until recently, Really Right Stuff only sold their gear directly. But you can now find them at B&H Photo.

You can also order them directly from RRS.