The Kirk TT-1 is an unusually solid table-top tripod rated for loads up to 100 pounds but is small and lightweight, easily fitting in a camera bag’s pocket. 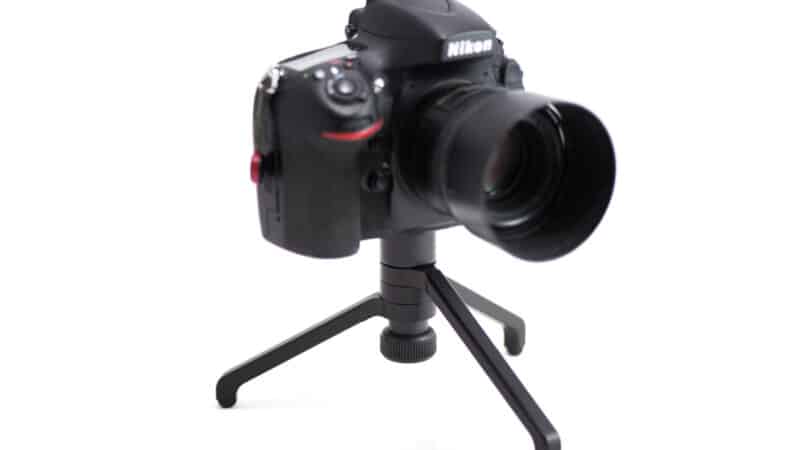 This is another review in my ongoing series on travel tripods.

I’m including a small selection of tabletop tripods as well. Most tabletop tripods are lightweight and pretty flimsy. But there are a few that are much sturdier and are suitable for even larger DSLRs and mirrorless camera and lens combinations, and it’s those that I’m focusing on.

The Kirk TT-1 is one of them. It’s not very big and fits easily in a camera bag pocket, but it punches well above its weight in terms of load-bearing capability. It’s very solidly built, which you can feel the moment you pick it up.

In terms of size, it looks pretty much like the kind of small, lightweight, portable tripod you might use for a cell phone, a GoPro, or another very small and lightweight camera.

But the Kirk TT-1 stands out because of its strength. It’s incredibly sturdy for its size and is rated to support loads up to 100 lb (45kg). There aren’t any frills–there isn’t even any branding on it–and the whole thing is made of aluminum and stainless steel, with each of the legs a single piece of metal without joins, so there really aren’t any weak points for things to go wrong.

Its legs are slightly staggered, so that when you rotate them around and line them up, they close up into a compact shape that fits easily in a camera bag’s pocket. It folds and unfolds very quickly and weighs only 9 oz (255 g). It doesn’t extend, so it has a constant height of 4.4″ (11 cm).

There’s a large knob at the bottom that locks (or loosens) the rotation of the legs, acting basically like a friction clamp on the legs to hold them in place.

Its feet are small rubber buttons. They offer some grip, but because they only offer a small surface area, it’s not as much as I’d prefer when using heavier loads.

You can, of course, attach a camera directly onto the tripod screw. But that’s not going to give you any flexibility for angling the shot since it’s in a fixed position.

To get more flexibility, you can add a small tripod head. But ideally, it should be a small one in the mini ball-head category. The base on which it sits isn’t very wide, so a larger head with a broad base isn’t going to get a lot of grip.

The tripod has an embedded 1/4″-20 stud but doesn’t come with a 3/8″-16 thread adapter, so you’ll need to pick one of those up separately if that’s what your head attaches with.

You can also attach a quick release plate directly, although that won’t add any directional flexibility–just the convenience of attaching and detaching quickly.

This one doesn’t actually come in a box at all. In keeping with the no-frills approach, it’s simply shrink-wrapped against a sheet of Kirk Enterprises-branded cardboard. There are no accessories, cases, or even instruction manuals–just the tripod itself.

Overall, it’s simple, rock-solid, and reliable. Kirk gear tends to be unusually well built, and the TT-1 is no exception. There’s really not much to go wrong, and I have no complaints with the core functionality. But there are a couple of minor things where I can see some room for improvement.

One is that the base where you attach the camera or a tripod head would be broader and give more grip and stability. It’s big enough to take a mini ballhead, bud most of the mini ballheads don’t approach anywhere near the load-bearing limit of these legs, and the larger heads that can carry larger loads don’t get as good a grip on the legs as they could.

The other is that the feel would be broader and give better grip on uneven or slick surfaces (like stone walls, etc.). The existing rubber button feet aren’t bad, but they don’t offer as much surface-area contact as they could. Of course, the benefit of the slim feet it currently has comes when you fold it up, and they don’t overlap.

If you’re after an unusually sturdy tabletop tripod, this is well worth a try. It’s simpler and smaller than something like the Varabon Baby T3 Mini Tripod but offers outsized stability. Another option that’s very similar is Leica’s Tabletop Tripod.

It’s most useful when paired with a small ballhead, but you’ll need to pick that up separately (and potentially a thread adapter as well). It’s not well-suited to shooting on uneven surfaces, and longer lenses might destabilize it, but in the right conditions, it can be a very handy and reliable go-anywhere piece of kit.

The Kirk TT-1 Mini Table Top Tripod is available from B&H Photo with a manufacturer’s list price of $119.95.