What Type of Battery Does the Ricoh GR III Take?

Whether you’re looking for a replacement or spare battery for your Ricoh GR III, here’s a rundown of what battery model to get and how to get the most out of it. 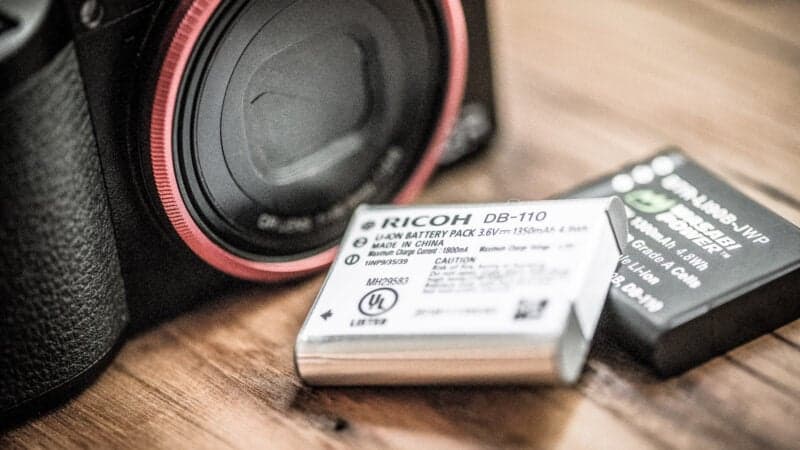 A battery is an essential accessory for the Ricoh GR III (as is a memory card). The camera comes with a battery. But rechargeable lithium batteries also don’t last forever. Over time and use, they degrade and stop holding a charge as well. So they eventually should be replaced. If you’re not getting as much shooting out of your battery as you used to, it might be time to replace it.

And having a spare, charged battery on hand can help you keep shooting longer. You can, of course, charge the battery while it’s inside the GR III, but that can slow you down and isn’t always convenient.

RELATED: I’ve posted some of the photos I’ve taken with my Ricoh GR III separately. You can find them here. I also have other posts related to the GR III here.

A few other cameras take this same kind of battery, so you can sometimes find it under different listings. The Olympus Tough TG-6/TG-5 cameras are notable examples. So you can find the same battery listed under Olympus model number LI-90B, and you can go ahead and use that interchangeably if that’s more readily available in your area.

With camera batteries, you have a choice: you can choose to go with the official battery with the manufacturer’s battery or an aftermarket version made by a third-party manufacturer. Each option has its pros and cons.

You can find the official Ricoh version here.

The advantage of sticking with the official brand is that it comes with the extra peace of mind of knowing that it’s officially supported by the camera manufacturer. So if you’re ever on the phone with their tech support and they ask what battery you’re using–as they inevitably will–you can avoid any awkwardness by being able to say that it’s an official Ricoh battery. And the batteries put out by camera manufacturers are usually high-quality batteries made with top-quality cells and with reliable quality control. The downsides of going with the officially branded battery are that they usually come at a premium price, and they’re not always as widely available in stock in stores.

Another alternative is to go with an aftermarket battery made by a third-party manufacturer. The main advantage is price: aftermarket batteries are often significantly cheaper than the official versions. They can also offer more choices too, not just in the manufacturer, but also in terms of whether they come in 2-packs or with chargers included.

While mileage can vary, I’ve had good experiences with some of the more prominent aftermarket battery manufacturers such as Watson, Wasabi Power, and Anker. I routinely use Wasabi Power batteries in my GR III, and have found them to work well.

I generally steer away from no-name brands that I’ve never heard of. While some are probably good, there’s also a risk that their manufacturing and quality control isn’t up to the same standards.

You can charge the battery in the camera with a USB cable (the GR III has a USB-C connector (also known as a USB Type-C).

There are also external battery chargers available that are especially useful for charging spares out of the camera. Again, there are official and aftermarket versions.

There’s also an AC adapter (model number K-AC166). It’s used to power the camera for longer shoots, such as time-lapse, or if you happen to be using the camera for live streaming as a webcam. It connects via the camera’s USB-C port.

Something to watch out for is what charging source the charger requires. Some plug into an AC wall socket. Others are USB chargers. Both systems can work well—it’s just a matter of which you’d find more convenient. I personally like chargers that have the flexibility of using a USB power source.

As you’d expect, a small camera like the Ricoh GR III uses a small battery.

The life you can expect to get out of the battery before it runs out of charge is going to vary widely based on things like which of the camera’s features you’re using, how you’re shooting with the camera, and even the ambient temperature. All of which means it’s hard to pin down precise numbers for what you can expect.

Modern digital cameras include many immensely useful features that also happen to use a lot of battery power. Anything from autofocus to autoexposure to saving to the memory card uses some battery power. But some features use more than others. Shooting video uses more power than shooting photos. Shooting continuous photos uses more power than intermittent single shots.

For another example, the back screen on digital cameras is a wonderful invention. As is the ability to wireless connect to your camera. But both are also major causes of camera battery drain. So doing things like minimizing viewing on the back screen, reducing its brightness, and turning off the wireless/wifi can all help extend your battery life.

Here are some good steps to take to maximize your GR III’s battery life:

Auto Power Off. You can reduce the time of inactivity before the camera powers down.

LCD Brightness. Reduce the brightness of the back screen.

Other features like image stabilization will also drain the battery, but it’s so useful that I rarely turn it off.

If you’re also shooting with other cameras, some other precautions you can make to get the most out of your battery is to turn off any GPS features.

The DN-110 battery is symmetrical, and it’s easy to put it in back to front. It will slot in as normal, and you won’t get an error warning. But the camera won’t power on. It’s something I’ve done a number of times by accident. So if your GR III won’t power on, it’s worth check that the battery is in the right way around. The contacts on the battery should match up with the contacts in the battery compartment.

What Type of Battery Does the Ricoh GR III Take?