The GoPro HERO3+ Black and HERO3+ Silver look practically identical. And while there’s a lot of overlap in their features, there are also important differences. Here’s a detailed breakdown of how they compare. 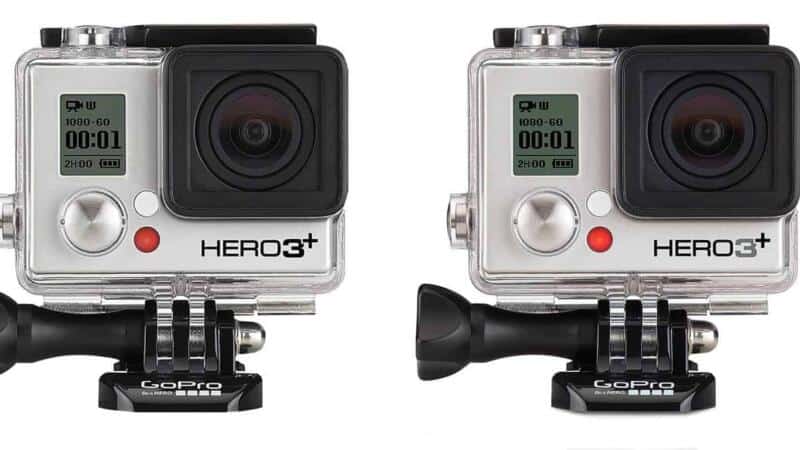 The GoPro HERO3+ Black and HERO3+ Silver cameras look practically identical. The only way you can tell them apart visually is with the very subtle difference in the “3” on the front–its color corresponds to the black or silver edition. Other than that, they look the same. Both of these cameras are updates to their respective HERO3 models.

Both of the 3+ models added improvements in image quality over their predecessors. There were also modest improvements in battery life. But while there’s a lot of overlap in their features, there are also some crucial differences that are important to know in advance to make sure that the specific edition does what you need it to do.

If you’re looking for 4K video, for example, the Silver isn’t going to work for you. But if you don’t need the advanced features of the Black, the Silver might be a more cost-effective option.

Both of these cameras weigh the same: 74g (2.6oz) for the camera body itself and 136g (4.8oz) with the standard housing. They look and feel basically identical.

Both of these share the same housings. The standard housing that comes with them in most configurations (aside from the music bundle) is rated to be waterproof down to 40 meters. Both can be removed from their housings and used naked (i.e., no housing) or with other types of frames or housings. A housing that works on the HERO3+ Black will work just as well on the HERO3+ Silver, and vice versa.

These use the same set of three buttons for controls. These buttons control not just things like power on and off and the shutter but also provide a way to navigate through the menu options that are displayed on the small monochrome LCD screen on the front of the camera. Both of these models have wifi, so you can use GoPro’s Capture app to control the settings and shooting and use GoPro Smart Remote.

Neither of these comes with a built-in LCD screen on the back. You can add one to both using the LCD Touch BacPac or an aftermarket version, both of which you’ll have to pick up separately.

Protune is GoPro’s umbrella term for some extended expert settings that give you more control over the visual and sound settings.

With video and photo settings, that includes things like controlling the white balance, limiting the ISO, adjusting the color and sharpness, and exposure compensation.

The Protune options on the HERO3+ Black also include the ability to record in 24fps, the traditional standard for cinematic footage.

In terms of Protune, the difference between these models is pretty cut and dried. The Black has Protune options, while the Silver doesn’t.

There’s quite a bit of overlap between the video modes of these two cameras, but there are also some key differences. I have a detailed master list of the video modes available on each camera at the bottom of this page.

The headline difference in the video modes is that the HERO3+ Black shoots 4K video (4096×2160 at 15fps). The highest resolution on the Silver is 1080p (at 60fps). If you’re shooting mainly for sharing on the web, 1080p is often more than enough (much web “HD” video is at 720p). While there are applications for 4K video now, it’s still a relatively niche area. Editing 4K video also consumes a lot of disk space and computer processing power (i.e., you’ll need a newer, faster computer with a lot of fast storage space).

The HERO3+ Black also added SuperView, what was then a new super wide-angle mode. GoPro pitches it as its most immersive view.

Like all recent GoPros, these models shoot MP4 video files encoded with the H.264 codec. Neither of these cameras includes onboard stabilization. That was something first added to the HERO5 models. You can use an external stabilizer or apply stabilization when post-processing the footage in something like Adobe Premiere or Final Cut Pro X.

Both of these have options for slow-motion video, but it only works at some resolutions. Basically, you’ll be looking for video modes that work at 48 frames per second or faster so that they can then be slowed down in processing to provide the slow-motion effect.

Take a look at the video mode comparison table at the bottom of this page for the resolutions that are available at 48fps or faster.

The Black has a slightly larger sensor. It produces 12MP images (4000 x 3000 px) compared to the 10MP (3680 x 2760 px) images of the Silver. While there’s not much in the numbers, it does allow the Black to have somewhat higher-quality photos with finer detail.

Both also have the option to set it for 7MP and 5MP photos if storage space is an issue (especially useful for time-lapse).

Both can shoot Timelapse photos, with the options of intervals at 0.5, 1, 2, 5, 10, 30, or 60 seconds. The camera itself will create the sequence of still images. To compile this series of photos into a time-lapse video you’ll need to import those images into other software like GoPro Studio to process and convert to a time-lapse video. Neither of them can shoot time-lapse video, where the video is generated on the fly in the camera. That was a feature that came with the HERO4 models.

Both have onboard mono microphones. Both are compatible with external microphones using the mini-USB port. Just remember to get a microphone adapter.

In nearly every case, these work with the same accessories, from mounts to housings to batteries to memory cards.

While there’s quite a lot of overlap in features and capabilities of the HERO3+ Black and HERO3+ Silver, the differences conform to the usual pattern in how GoPro differentiates between the Black and Silver lines. Both are very capable cameras and look practically identical, but the Black has more high-end video and photo features, with more video modes and Protune options.

Video Modes of the HERO3+ Black and Silver Compared

Here’s a master list of the video modes each has.