This is a selection of sample images I’ve taken with the Sigma 14-24mm f/2.8 DG HSM Art Lens to give a sense of how it performs in real-world shooting conditions. 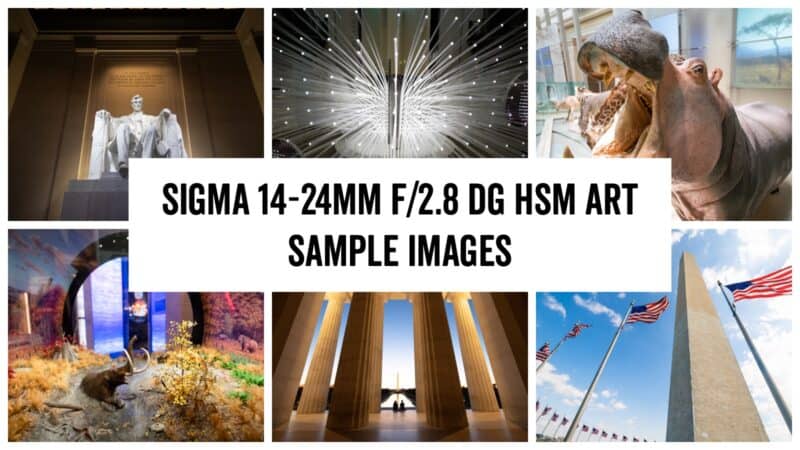 It’s possible to use this lens on cropped-sensor APS-C DSLRs, but you’ll lose a significant chunk of the wide-angle perspective (on an APS-C sensor camera, it will become equivalent to what a 21-36mm lens would be on a 35mm/full-frame camera). There are versions of this lens for Nikon F, Canon EF, and Sigma SA mounts.

The version I’ve been using is the Nikon F-mount version, and I’ve been shooting with it on a Nikon D850 body. Nikon also has its own 14-24mm ƒ/2.8 lens for DSLRs, a lens that I’ve covered in some detail before.

This lens is both fast (with a maximum aperture of ƒ/2.8 throughout the zoom range) and, zoomed out, falls in the ultra-wide category. To combat the usual heavy lens distortion that you get from such a wide perspective, it has three aspherical elements to keep lines straight.

Overall, I’ve found this lens to be great fun to shoot with. While I also like the Nikon 14-24mm, I prefer the size of the Sigma lens for shooting. And I have no complaints performance-wise. I’ve found it to be sharp, have fast-enough focusing, few of the traditional optical flaws (vignetting, chromatic aberration, barrel distortion, or prone to flaring). Overall, I’ve found it to be a high-performance, portable, and versatile ultra-wide lens that works well in the type of available-light walking-around photography I’ve been using it in.

Here are some photos I’ve taken with this lens. I’ve been using the Nikon F-mount version on a Nikon D850.

I’ve tried to include a variety of zoom ranges and apertures, including some with similar scenes but taken at different focal lengths and apertures.

This lens isn’t compatible with screw-on lens filters because of the protruding front glass element.

The lens hood is attached and non-removable.

The maximum aperture of ƒ/2.8 is constant throughout the zoom range.

The Sigma 14-24mm f/2.8 DG HSM Art ultra-wide-angle zoom lens has an MSRP of $1599 (but you can often find it at a street price significantly lower than that).