Wondering what the difference is between UHS-I and UHS-II with SD and microSD cards? Here’s an explanation. 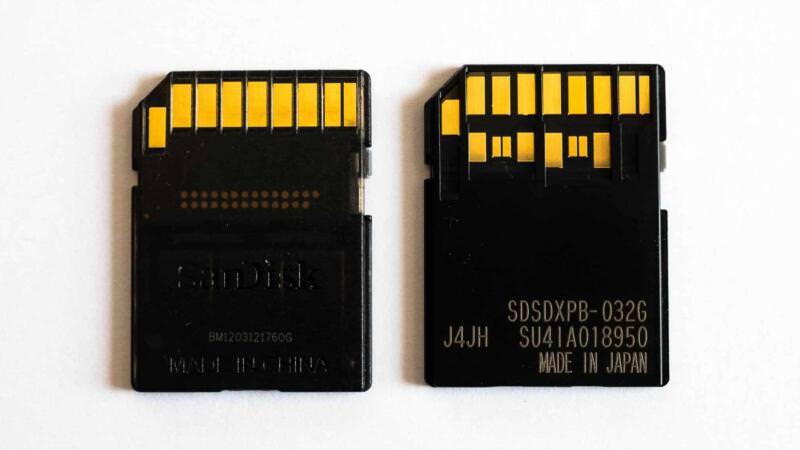 If you’ve looked at buying an SD or microSD card lately, you might have run into some new codes: specifically, UHS-II.

It refers to something called ultra high-speed bus, which in turn refers to the interface between the card and the device. So far, there is UHS-I and UHS-II. There is a specification of UHS-III, but I’ve not seen any cards actually turn up using that yet.

UHS-II is the newer, and potentially faster, system but adoption is still not widespread. And a UHS-II isn’t necessarily guaranteed to be faster than every UHS-I card in practice. While it wasn’t always true initially, the current fastest SD cards are UHS-II (when used with a UHS-II compatible host, that is).

The UHS-I and UHS-II specifications are designed to be backward compatible. That means that you can use a UHS-II card in a device that’s compatible with UHS-I and vice versa. But if you do so, you’ll be limited to the lower spec, in this case UHS-I. That is the general intention, at least. But it gets a little more complicated, because there are different implementations of UHS-I that have different speeds. Some cards fall back to a slower UHS-I spec; better cards fall back gracefully to a UHS-I spec known as SDR104. Unfortunately, that particular part of the card’s capabilities is rarely specified in either the packaging or the technical specs.

Lexar Professional 2000x 64GB SDXC UHS-II Card (LSD64GCBNA2000R)
Check Price at Amazon
But in many cases, it frankly doesn’t matter which you get. But that’s simply because the cameras and devices that can take full advantage of UHS-II are only just starting to become available.

And some that are UHS-II compatible can be a bit quirky. For instance, the FujiFilm X-Pro 2 camera has two SD slots. But only one uses UHS-II. So if you put a UHS-II SD card in the slot that has the UHS-I interface, you’ll be limited to UHS-I speeds.

But if you have a device that does use the UHS-II interface–and the technical specs or instruction manual will say so if it does–then there’s a good chance you’ll get better performance out of a UHS-II card.

One common device where this can become an issue is with memory card readers. Most of the card readers currently available support UHS-I cards. UHS-II cards will work, but they’ll be limited to UHS-I speeds. There are some card readers that do support UHS-II, such as the Lexar SR2 reader or the SanDisk Extreme Pro reader, but you can’t assume that every card reader does.

How to Tell the Difference Between UHS-I and UHS-II

There are two ways to tell the difference. The first is obvious: look at the label or packaging. They’ll have either UHS-I or UHS-II, or sometimes just I or II. Technically, it should be Roman numerals, but you’ll sometimes see it incorrectly written as a number 1, like UHS-1.

You can also tell them apart by looking at the cards themselves. UHS-I cards have a single row of pins on the back. UHS-II have two rows. In this example, both of these are SanDisk Extreme Pro cards, just different generations.

The UHS-II code isn’t the only new code you’ll see on some microSD and SD cards. There’s also a new code that relates to suitability for recording high-resolution video. U1 and U3 have been around for a while; the new addition is V30.

All of these are speed classes aimed at recording high-resolution video. And they’re a separate designation from the UHS-I vs UHS-II one. I have more information on microSD speed classes here.

Images and product information from Amazon PA-API were last updated on 2022-06-30 at 19:20. Product prices and availability are accurate as of the date/time indicated and are subject to change. Any price and availability information displayed on Amazon Site at the time of purchase will apply to the purchase of this product.