Video Resolutions, Framerates, and Modes on the HERO (2018)

Here’s a rundown of the video resolutions, framerates, fields of view, and modes that are available on the GoPro HERO (2018). 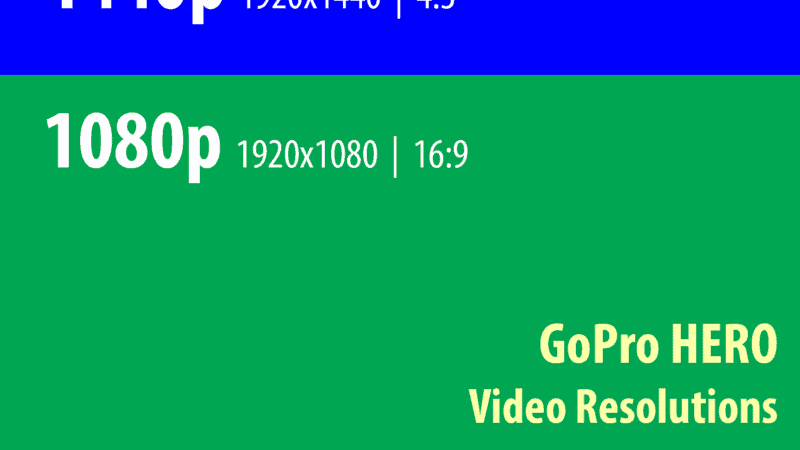 GoPro now have two cameras called the GoPro HERO. The first was released in 2014. 1

This post refers to the newer version which was released in 2018. To distinguish it, it’s often referred to as the HERO (2018), and that’s the convention I’m using here.

The HERO (2018) is GoPro’s new entry-level camera, and it has a stripped-down set of features to make it both inexpensive and also easy to use. If you compare it to one of the higher models such as the GoPro HERO6 Black, you’ll find that the HERO (2018) has far fewer options for shooting video. But the options that it does have are likely to be good fits for many users who have relatively straightforward needs or want something simple, and especially those who are looking to share their footage online.

So here’s a rundown of the video modes that are available in the GoPro HERO (2018).

The HERO has a vastly simplified offering in terms of video resolutions and framerate. There are two video resolutions available: 1080p and 1440p. For each of those, there are four possible framerate options (60fps and 30fps in NTSC mode and 50fps and 25fps in PAL mode).

Both of these have the same width–1080px. The difference is in the height. With its 4:3 aspect ratio, the 1440p mode gives some extra space vertically. That can come in handy if you’re trying to prevent the subject from jumping out of the frame.

The 1080p mode has the standard HD aspect ratio of 16:9 that we’re used to with HD video and modern TVs. On the GoPro HERO, shooting in 1080p also gives you more options for selecting the field of view (more on that below).

Here’s how the resolutions compare. You can click on the image to open a full-size version if you want to see a 1:1 version.

The HERO does not shoot 4K or 2.7K video. For those resolutions, you’ll need to step up to one of the higher models in the range such as the HERO5 Session or HERO6 Black.

There are three fields of view available when shooting video on the HERO, but they’re not all available in all video modes.

The standard field of view is the Wide model, which is the distinctive fisheye look that we’re used to seeing with footage shot on a GoPro. The Wide view is available in all the HERO’s video modes, but it’s the only FOV available when shooting in 1440p.

If you’re shooting in 1080p you have more options: Wide, Medium, and Narrow. Here are some practical examples of what those look like compared side by side.

If you look at the specs on GoPro’s website you’ll see it says that the maximum bitrate of the HERO (2018) is 60 Mbps, which is the same as the HERO5 Black. But so far as I can tell from the actual video files created from the HERO (with firmware 01.00.00), the maximum bitrate it can currently encode the variable bitrate data stream at is a target of 45 Mbps. It’s possible that the 60 Mbps is a placeholder for an increase that will be enabled in a future firmware update (something that GoPro has done before), but so far as I can tell the HERO can’t currently encode video at 60 Mbps, but it’s possible that will change in future firmware updates.

To reduce the risk of lockups and the video recording stopping unexpectedly, you’ll want to use an SD card that’s fast enough to cope with the datastream when recording video.

The HERO uses a standard H.264 codec that produces videos with an MP4 file extension (in addition to the sidecar LRV and THM files).

It doesn’t use the newer H.265/HEVC codec that’s used for some of the high-end modes on the HERO6 Black.

The HERO (2018) has built-in video stabilization. GoPro calls it EIS, for Electronic Image Stabilization. As that implies, it’s a digital approach done by software. The results are generally not as good as true optical or mechanical stabilization, but it’s also a lot simpler to use. And most of the time it results in much smoother footage.

You can turn the stabilization on or off.

There are no Protune options available on the HERO (2018).

While some of the newer GoPro models include a digital zoom feature, that’s not available on the HERO (2018). What you can use, which has a similar effect, albeit in a more limited way, are the medium and narrow fields of view. Of course, those are fixed once you set them, so it’s not the same as zooming while recording.

Video Resolutions, Framerates, and Modes on the HERO (2018)