Like all GoPros, the battery life of the HERO10 Black isn’t among the camera’s strong suits. But there are some things you can do to maximize your shooting time before the battery dies. 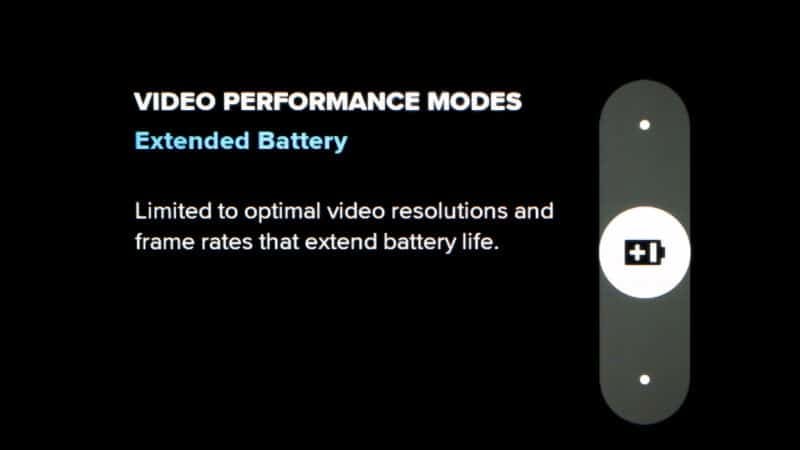 There are many things to like about shooting with GoPros, but their battery life isn’t one of their strengths.

While there’s no magic fix for that, there are some things you can do to maximize your shooting time.

None of these by itself is likely to be an immediate game-changer. Some of them provide quick wins–others can be less convenient. But used in combination, they can help you milk every last drop out of your GoPro battery and maximize your shooting time.

Here’s the quick version–you can find more detail below:

But before we get deeper into the tips, there are a few prerequisites that I’m assuming here:

The battery is healthy. Old lithium batteries lose their effectiveness over time. In recent models, GoPro has built in a battery health check feature. With the battery charged, turn the camera on and go to:

The battery is fully charged.

You’re saving the data to an SD card. Using the HDMI or USB ports to output will have different power demands.

Tips for Getting the Most Battery Life from a HERO10

So here are some ways to look for power savings when shooting with a GoPro HERO10. I’m starting generally with quick and easy measures before getting into measures that rely on extra accessories.

Doing this will give you the biggest win overall. That’s because it limits the options available to the most battery-friendly options. But it doesn’t do everything–it doesn’t disable GPS, for example–so it’s still worth adding some of the other steps below. And this performance mode only affects shooting video, so it won’t give you any gain if shooting photos or timelapse.

The Extended Battery Mode is something GoPro rolled out in a firmware update after the camera was released. When the HERO10 was released, many users (me included) were disappointed with the camera overheating and chewing through battery life very quickly.

After initially suggesting user error, GoPro saw the light and issued a major firmware update that added three new Video Performance categories. (If you don’t see these available on your HERO10, the first thing to check is that you’re running the most recent firmware (or at least v1.16 or newer).) 1

There’s a Maximum Video Performance mode, which is all the bells and whistles. There’s a Tripod/Stationary Video mode that is designed primarily to mitigate the overheating issues. And there’s the one that is most relevant here: the Extended Battery performance mode.

You can enable it by going to the dashboard on the back screen of the camera. The icon at the bottom left, with the lightning bolt, is the shortcut for the Video Performance modes selection. Click on that, and choose Extended Battery.

Once you have it enabled, you’ll get a warning when you turn the camera on that “Extended Battery Mode Enabled,” the dashboard icon will change to a yellow/orange circle with a battery icon, you’ll see “[EB]” next to the preset name when shooting video, and the video camera icon will have a yellow/orange dot on it in general use.

The functional difference you’ll notice when you enable Extended Battery mode is that it will limit the resolution/framerate combinations you can shoot with. For instance, the highest resolution framerate available in Extended Battery mode is 5K30 rather than 5K60. But it does still let you select between Standard and High bitrates. Oddly, it doesn’t turn off GPS or some of the other features that can leach out battery life. You can find the full list of available framerates and resolutions here.

Maintaining an active wireless connection uses quite a bit of battery power, especially if you’re using features that require a wifi connection (such as streaming live preview).

LCD screens are notorious power sucks for digital cameras, and extensive use of the screens (crimping) can make a big difference in battery life.

There are a few things you can do on a GoPro HERO10 Black to mitigate that. An easy one is to reduce the screen brightness. A brighter screen consumes more power than a dimmer screen.

The default brightness on a HERO10 is 50%. You can take that all the way down to 10% (you can’t turn it off completely, because that makes it difficult to operate the camera).

Along the same principle, you can also reduce the amount of time the screen stays lit before turning off due to inactivity.

I leave mine set to 1 minute.

Use Burst Mode Instead of LiveBurst

Both Burst Mode and LiveBurst are very effective at capturing fast action. But because LiveBurst is constantly recording in order to offer pre-roll, it means that it’s functionally the same as recording video. So Burst Mode uses much less battery power than LiveBurst.

You can use it in place of the standard battery. You might see a slight improvement in battery endurance in “normal” temperatures. But it’s in cold temperatures where this battery comes into its own.

So I only recommend the Enduro if you’re shooting in cold ambient temperatures. They also work well in normal temperatures–they’re what I now use for regular shooting as well. They’re only slightly more expensive than the standard battery (the official GoPro-branded ones, that is).

GoPro has also now released an official Enduro dual-battery charger that can charge two Enduros at the same etime.

It’s worth noting, though, that when connected to a HERO10, the camera will be water-resistant but not waterproof. That’s because the Volta connects via the camera’s USB-C port, which means you can’t use the usual waterproof door on that compartment.

At the time of writing, the Volta is a very new release and I’m still in the process of testing it out (stay tuned for my hands-on review!). But GoPro claims that it delivers “over 4 hours of 5.3K recording—a total of 3x the normal runtime,” a claim that strikes me as entirely plausible given other power grips I’ve used.