Here’s a straightforward guide on how to update the Ricoh GR III’s firmware. 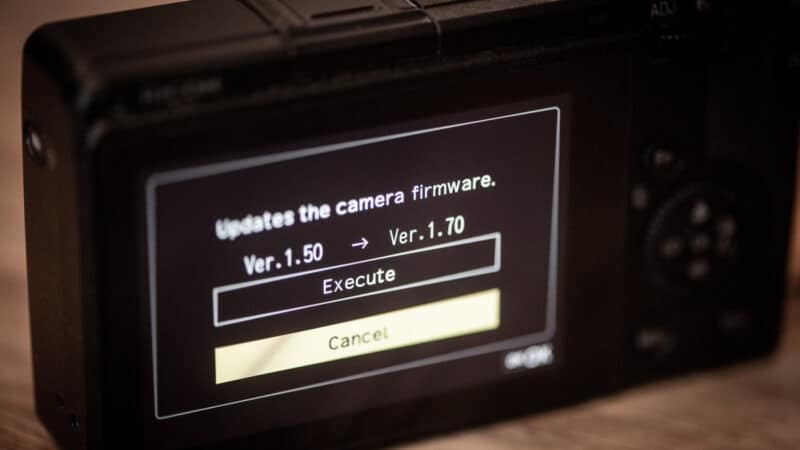 There can be various reasons that camera manufacturers push out new firmware. They can add new features, tweak menu items, fix problems, or squash bugs. It’s not something that most camera manufacturers often do, but it’s worth checking from time to time whether a new firmware update has been issued. In nearly all cases, firmware updates bring improvements to the camera’s performance in one way or another. 1 Sometimes they’re minor; sometimes they add whole new shooting modes.

But unlike what we’ve become used to with phones and other mobile devices, and to some extent with computers, cameras don’t usually notify you that there’s an update available, let alone apply the update automatically. 2

So it’s a manual process to update the firmware. The good news is that the process with the Ricoh GR III is easy–they don’t make you jump through as many hoops as some other camera manufacturers do.

Although it’s an easy process, there are some things you need to be careful of. Because when something goes wrong with a firmware upgrade, it can render the whole device inoperable. So it’s very, very important that the process not be interrupted. And, to that end, it means that you should be starting with a fully charged–or, at least, nearly fully charged–battery. And once the update has started, you shouldn’t be messing with any buttons on the camera. The process is quick–typically less than a minute.

Before you get started, there are some things to do to get ready for the update.

You can find the version of the GR III’s firmware that’s currently installed on the camera by going to:

Once you click on that option, the next screen will show you the firmware version.

You can check that against the latest version number on Ricoh’s website.

If you already have the latest version, there’s no reason to proceed further.

Make Sure the SD Card is Empty

While it’s not strictly required that you use a blank SD card, this precaution can help reduce the risk of problems later. So it’s worth downloading any images from the card and then format it.

Make Sure Your Camera’s Battery is Charged

I know I’ve already mentioned this above, but it’s important. You don’t want to risk the update process being interrupted.

You can find the latest firmware for the Ricoh GR III from Ricoh’s site. Here’s a direct link.

Copy the Firmware File to a Memory Card

Using a card reader with your computer, run the downloaded file. It’s a self-extracting file and will output a file with the extension of .bin (e.g., fwdc239b.bin). Copy that .bin file to the root of the memory card (that is, don’t put it in a subfolder).

Turn the Camera Power Off

Power down the camera as normal.

Put the SD card back in the camera.

This combination is what tells the camera to look for the .bin firmware file and then go into the firmware update mode.

When the camera powers up now, you should see a message about “Update the camera firmware.”

It will start the update process and give you a basic progress screen. The process shouldn’t take more than a minute or so.

It’s very important that the camera not be disturbed during the rest of the update. If the update process is stopped. And yes, I know I’m repeating myself again, but interrupting a firmware update can turn your beautiful GR III into a paperweight. Once you push Execute, just let the camera do its thing undisturbed.

Once it’s done, you’ll get an on-screen message that “Update completed.”

You can now turn the camera off.

It’s a good idea now to formate the memory card. The .bin file isn’t deleted automatically as part of the firmware update process. So formatting the card will remove the file and eliminate the risk of a problem later.

This is an optional step, but if you want to confirm that the process was completed successfully, you can go back to the firmware version screen to check the version number displayed.

Firmware updates take effect immediately. Any new features, tweaks, or fixes included in the update will be instantly available.

The GR III does not need to be connected to your computer for the update. The update is run from the camera’s memory card.