Here are some photos taken at high ISOs with the Ricoh GR III under real-world shooting conditions. 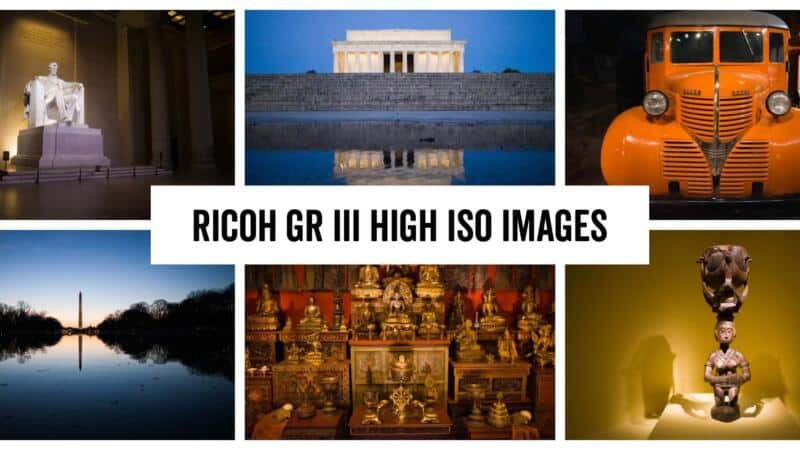 But in some respects, that sounds more impressive than it turns out it is in practice. That’s because there are marked trade-offs at those very high ISOs that limit their usefulness in many real-world shooting situations. While the GR III does have a significantly better sensor, it doesn’t mean that the image quality of the GR III at ISO 102400 is the same as the image quality of the GR II at ISO 25600.

Unlike some cameras, the Ricoh GR III doesn’t explicitly distinguish between a native ISO range and an extended ISO range, and it’s not immediately clear where the threshold is between the sensor hardware’s native sensitivity and where the camera’s built-in processing engine takes over to apply a software-powered boost. But if you shoot in the very high ISOs, you’ll quickly notice that the image quality drops off markedly at the top end, with much more image noise, much less dynamic range, and much less accurate colors.

Where the useful upper limit lies is entirely a matter of personal tolerance for these image quality issues. If it comes down to getting the shot or not, I’m willing to live with much more image noise. Ditto if I’m converting to black and white. But for everyday shooting with the GR III, ISO 16000 is probably my practical upper limit. But even below that, shadows can get quite muddy in low-light shots.

Beyond that, the noise just becomes too intrusive for my tastes, and I know that photo editors are going to balk at any images I submit to them that are shot at higher ISOs than that. By the time you get to ISO 32000, the dynamic range is getting very thin, and the image is becoming quite harsh. At ISO 51200 and above, it’s in the break-the-glass territory. That’s not to say that the images at ISO 32000 and above aren’t usable–it depends entirely on what you’re aiming for and how you’re using them, so it’s going to come down to personal preference. And if you’re posting them to something like Instagram, where they’ll be viewed on something small like a smartphone, many of the image flaws might well just melt away, leaving for a great-looking capture.

One other thing that’s worth noting is that when you’re shooting with the very high ISOs, there’s a good chance you’ll find you get a better-looking image by using the camera’s own processing engine to output a JPG rather than using a RAW version and processing it yourself. Or, more precisely, you can get a better-looking image more quickly because the camera’s algorithm is tailored to this specific sensor.

Here are some I’ve shot with the GR III in real-world shooting at high ISOs. I’m focusing here on ISO 6400 and above.

But there are some things worth noting when looking at these photos. Like most cameras, the GR III applies noise reduction to its JPG images. By default, that is—it is possible to turn the noise reduction off completely. That noise reduction setting also applies to the JPG thumbnail previews that are embedded within the DNG RAW files, but it doesn’t have any effect on the underlying RAW data. All of these photos were shot in RAW, with the JPGs you see on the page generating directly from the RAW image, thus bypassing the camera’s own noise reduction. I’ve only applied the lightest touch of noise reduction, using Lightroom’s default setting (Luminance: 0, Color: 25, Detail: 50, Smoothness: 50). So there’s plenty of room to crank up the aggressiveness of the noise reduction either in Lightroom or a dedicated app like Noise Ninja. But my purpose here is to provide some examples of the camera’s performance, not the software’s effectiveness.

There are some things about the GR III’s behavior with respect to ISOs that are worth knowing.

I typically have the camera set to Auto ISO. In that setting, you can set maximum and minimum limits as well as a minimum shutter speed threshold.

Somewhat oddly, when using the Auto ISO setting, it’s possible for the actual ISO used when taking the shot to differ from what you see on the display screen. I assume that’s because the exposure will be recalculated at the time you actually take the photo, but I haven’t confirmed that.

And there are some limits when shooting with smaller image sizes set. You can find more details about this on page 84 of the PDF manual.