Here are some of the key accessories and replacement part numbers for the Ricoh GR III compact camera. 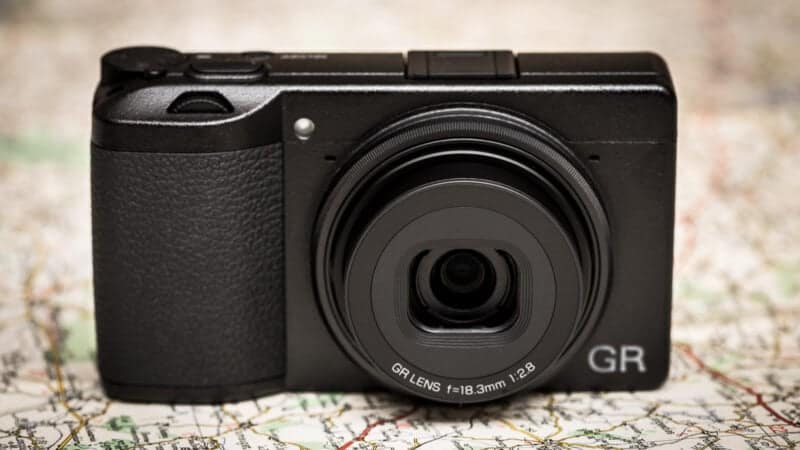 The Ricoh GR III is a pretty self-contained little camera. Except for a memory card, there’s really not much else that you actually need to get before you head out shooting.1

There are some accessories that are a higher priority than others. A spare battery, for example, comes in very handy.

Whether you’re looking to kit out your GR III or replace a part, here are the model numbers of some of the core accessories and replacement parts that are compatible with the Ricoh GR III.

The GR III doesn’t come with a memory card as standard, so you’ll most likely have to pick one up separately. Ricoh doesn’t make their own memory cards, and there’s no specific officially recommended SD card, but I’ve put together a detailed post on SD card recommendations for the GR III separately.

The short version is that the GR III takes SDXC and SDHC cards and has a UHS-I interface. And it doesn’t need the latest and greatest super-fast SD card.

Here are some quick recommendations. I have a much more detailed version here.

The ring cap is the small plastic ring that attaches around the lens. If you’ve been shooting with your GR III for a while, chances are, it has fallen off. While you do have to remove it to attach the lens adapter, it’s a poor design that tends to fall off and get lost far too often. I’ve lost a few of them now.

The camera will work just fine without it. But that will leave some contacts exposed around the lens barrel, which isn’t ideal. But the good news is that it’s easy to replace, and you can even have some fun with it by incorporating a splash of accent color.

The official replacement part is overpriced. But you can also pick up much less expensive aftermarket versions. They’re also available in different colors, so you can bling up your camera with a personal touch of accent color–or make it look like the Street Edition.

The GR III has a USB Type-C connector port.

When you get a cable, you can get them with another USB Type-C connector on the other end or a more traditional USB Type-A connector. Which you choose depends entirely on what you’re plugging into. For example, some newer laptops only have USB-C, while most other computers have USB-A.

Aside from the connectors on the ends, not all USB cables are the same. Make sure to get one that can handle both data and power.

The battery for the Ricoh GR III is a small rechargeable lithium-ion battery rated for 3.6V 1350mAh 4.9Wh.

You can get the official Ricoh version. There are also aftermarket versions that can be much better value but work just as well.

An external charger isn’t required, because you can charge the battery in the camera (using a USB-C cable). But if you’re using a spare battery, you can use an external battery charger so you can charge and shoot simultaneously.

Ricoh has produced a wide-angle conversion lens that takes the standard 28mm view down to a 21mm (in 35mm equivalent). While it does add some extra bulk to an otherwise small camera, it works well and adds a more dramatic, wider view. I have an in-depth review of the GW-4 separately.

Something to be aware of, though, is that you will also need to pick up the GA-1 lens adapter separately. For reasons I really don’t understand, the wide-angle conversion lens doesn’t come with the adapter, and both are required to make it work. So make sure you pick up one of those at the same time.

The Ricoh GR III doesn’t have a built-in viewfinder—there’s just the back screen.

But they make two versions of an external viewfinder that slides into the camera’s hot shoe.

The standard one covers both the regular 28mm view as well as the 21mm view if you’re using the wide-angle conversion lens.

There’s also a mini viewfinder; that model seems to be hard to find.

The back screen of the GR III is quite exposed, and if you lie the camera on its back, the screen comes in contact with the surface and can be scratched. Even if you’re putting the camera in your pocket, there’s a risk of keys or coins scratching the screen.

You can, of course, use the GR III with just about any camera case or bag. There’s nothing about the camera that absolutely requires a dedicated case.

But Ricoh does make a dedicated soft-case that fits snugly around the camera and offers some protection even if you’re toting the camera around in your pocket. I’ve been using one for a couple of years, and it’s held up very well, and it keeps my camera safer from bumps and scratches.

Again, there’s no particular reason you have to use the official GR neck strap, but there is one. The main part is leather, and it even has a discreet, embossed “GR”.

There’s even an official “GR” leather hand strap! But, again, aside from the branding, there’s no special reason to use the official strap. If you do use a different one, you might need D-rings if the thread doesn’t go through the camera’s small attachment loops.

The GR III doesn’t have a built-in flash. It supports the Pentax P-TTL flash protocol. (I’ve also used it with other brands of off-camera flash, with the right controller.)